And as to the faculties of the mind, setting aside the arts grounded upon words, and especially that skill of proceeding upon generall, and infallible rules, called Science; which very few have, and but in few things; as being not a native faculty, born within us; nor attained, (as Prudence,) while we look after somewhat else.

By this we may understand, there be two sorts of knowledge, whereof the one is nothing else but sense, or knowledge original (as I have said at the beginning of the second chapter), and remembrance of the same; the other is called science or knowledge of the truth of propositions, and how things are called, and is derived from understanding.

Geology is part of that remarkable dynamic process of the human mind which is generally called science and to which man is driven by an inquisitive urge. By noticing relationships in the results of his observations, he attempts to order and to explain the infinite variety of phenomena that at first sight may appear to be chaotic. In the history of civilization this type of progressive scientist has been characterized by Prometheus stealing the heavenly fire, by Adam eating from the tree of knowledge, by the Faustian ache for wisdom.

I am tired of all this thing called science here. ā€¦ We have spent millions in that sort of thing for the last few years, and it is time it should be stopped.

Iā€™m saying that the leaders of the church have locked the sacred cow called science in the stable and they wonā€™t let anybody enter; they should open it immediately so that we can milk that cow in the name of humanity and thus find the truth.

My kingdom is as wide as the universe, and my desire has no limits. I am always going about enfranchising the mind and weighing the worlds, without hate, without fear, without love, and without God. I am called Science.

From La Tentation de Saint-Antoine (1874), as The Temptation of Saint Anthony, collected in The Complete Works of Gustave Flaubert (1904), 141. 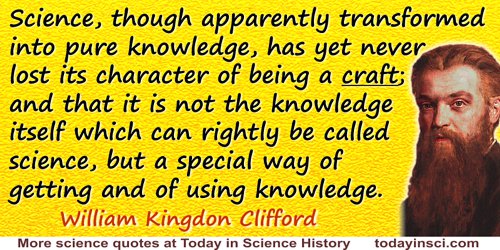 Science, though apparently transformed into pure knowledge, has yet never lost its character of being a craft; and that it is not the knowledge itself which can rightly be called science, but a special way of getting and of using knowledge. Namely, science is the getting of knowledge from experience on the assumption of uniformity in nature, and the use of such knowledge to guide the actions of men.

In 'On The Scientific Basis of Morals', Contemporary Review (Sep 1875), collected in Leslie Stephen and Frederick Pollock (eds.), Lectures and Essays: By the Late William Kingdon Clifford, F.R.S. (1886), 289.

That ability to impart knowledge ā€¦ what does it consist of? ā€¦ a deep belief in the interest and importance of the thing taught, a concern about it amounting to a sort of passion. A man who knows a subject thoroughly, a man so soaked in it that he eats it, sleeps it and dreams itā€”this man can always teach it with success, no matter how little he knows of technical pedagogy. That is because there is enthusiasm in him, and because enthusiasm is almost as contagious as fear or the barberā€™s itch. An enthusiast is willing to go to any trouble to impart the glad news bubbling within him. He thinks that it is important and valuable for to know; given the slightest glow of interest in a pupil to start with, he will fan that glow to a flame. No hollow formalism cripples him and slows him down. He drags his best pupils along as fast as they can go, and he is so full of the thing that he never tires of expounding its elements to the dullest.
This passion, so unordered and yet so potent, explains the capacity for teaching that one frequently observes in scientific men of high attainments in their specialtiesā€”for example, Huxley, Ostwald, Karl Ludwig, Virchow, Billroth, Jowett, William G. Sumner, Halsted and Oslerā€”men who knew nothing whatever about the so-called science of pedagogy, and would have derided its alleged principles if they had heard them stated.

The mathematician pays not the least regard either to testimony or conjecture, but deduces everything by demonstrative reasoning, from his definitions and axioms. Indeed, whatever is built upon conjecture, is improperly called science; for conjecture may beget opinion, but cannot produce knowledge.

In Essays on the Intellectual Powers of Man, Essay 1, chap. 3.

The so-called science of poll-taking is not a science at all but mere necromancy. People are unpredictable by nature, and although you can take a nation's pulse, you can't be sure that the nation hasn't just run up a flight of stairs, and although you can take a nation's blood pressure, you canā€™t be sure that if you came back in twenty minutes youā€™d get the same reading. This is a damn fine thing. .

The so-called science of psychology is now in chaos, with no sign that order is soon to be restored. It is hard to find two of its professors who agree, and when the phenomenon is encountered it usually turns out that one of them is not a psychologist at all, but simply a teacher of psychology. ā€¦ Not even anthropology offers a larger assortment of conflicting theories, or a more gaudy band of steaming and blood-sweating professors.

When I went to the scientific doctor
I realised what a lust there was in him to wreak his so-called science on me
and reduce me to the level of a thing.
So I said: Good-morning! and left him.