Blow, winds, and crack your cheeks! Rage, blow,
You cataracts and hurricanoes, spout
Till you have drenchd our steeples, drowned the cocks!
You sulph'rous and thought-executing fires,
Vaunt-couriers of oak-cleaving thunderbolts,
Singe my white head; and thou all-shaking thunder,
Strike flat the thick rotundity o'th' world,
Crack natures moulds, all germens spill at once
That makes ingrateful man.

Delusions are often functional. A mothers opinions about her childrens beauty, intelligence, goodness, et cetera ad nauseam, keep her from drowning them at birth.

However, the small probability of a similar encounter [of the earth with a comet], can become very great in adding up over a huge sequence of centuries. It is easy to picture to oneself the effects of this impact upon the Earth. The axis and the motion of rotation changed; the seas abandoning their old position to throw themselves toward the new equator; a large part of men and animals drowned in this universal deluge, or destroyed by the violent tremor imparted to the terrestrial globe.

I do not think words alone will solve humanitys present problems. The sound of bombs drowns out mens voices. In times of peace I have great faith in the communication of ideas among thinking men, but today, with brute force dominating so many millions of lives, I fear that the appeal to mans intellect is fast becoming virtually meaningless.

In 'I Am an American' (22 Jun 1940), Einstein Archives 29-092. Excerpted in David E. Rowe and Robert J. Schulmann, Einstein on Politics: His Private Thoughts and Public Stands on Nationalism, Zionism, War, Peace, and the Bomb (2007), 470. It was during a radio broadcast for the Immigration and Naturalization Service, interviewed by a State Department Official. Einstein spoke following an examination on his application for American citizenship in Trenton, New Jersey. The attack on Pearl Harbor and Americas declaration of war on Japan was still over a year in the future.

It is a better world with some buffalo left in it, a richer world with some gorgeous canyons unmarred by signboards, hot-dog stands, super highways, or high-tension lines, undrowned by power or irrigation reservoirs. If we preserved as parks only those places that have no economic possibilities, we would have no parks. And in the decades to come, it will not be only the buffalo and the trumpeter swan who need sanctuaries. Our own species is going to need them too. It needs them now.

Conclusion of essay 'The Marks of Human Passage', collected in This is Dinosaur: Echo Park Country and its Magic Rivers (1955), 17. 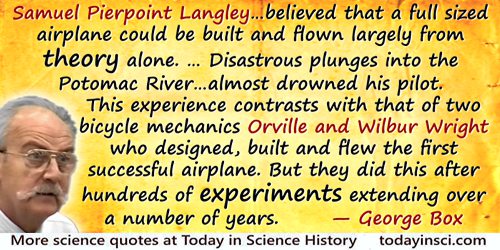 Samuel Pierpoint Langley, at that time regarded as one of the most distinguished scientists in the United States  evidently believed that a full sized airplane could be built and flown largely from theory alone. This resulted in two successive disastrous plunges into the Potomac River, the second of which almost drowned his pilot. This experience contrasts with that of two bicycle mechanics Orville and Wilbur Wright who designed, built and flew the first successful airplane. But they did this after hundreds of experiments extending over a number of years.

Self-righteousness is a loud din raised to drown the voice of guilt within us.

In The True Believer: Thoughts on the Nature of Mass Movements (1951) Section 69

We are drowning in information, and starved for knowledge.

We do whatever we can to deny intuition of the invisible realms. We clog up our senses with smog, jam our minds with media overload. We drown ourselves in alcohol or medicate ourselves into rigidly artificial states... we take pride in our cynicism and detachment. Perhaps we are terrified to discover that our rationality is itself a kind of faith, an artifice, that beneath it lies the vast territory of the unknown.

[Reporting after the now infamous 22 Jun 1969 burning of the Cuyahoga River:] Some River! Chocolate-brown, oily, bubbling with subsurface gases, it oozes rather than flows. Anyone who falls into the Cuyahoga does not drown, Cleveland's citizens joke grimly. He decays... The Federal Water Pollution Control Administration dryly notes: The lower Cuyahoga has no visible signs of life, not even low forms such as leeches and sludge worms that usually thrive on wastes. It is alsoliterally-a fire hazard.