...He cannot conclude however, without observing, that from the contemplation of so great a variety of extraneous fossils discovered in the cliffs which were evidently the produce of very different climates, he thinks himself rationally induced to believe that nothing short of an universal deluge could be a cause adequate to this effect.

Plantae Favershamiensis, Appendix, 'Establishing a short view of the fossil bodies of the adjacent island of Sheppey.' Quoted in David Beerling, The Emerald Planet: How Plants Changed Earth's History (2007), 145.

During the time of the Deluge, whilst the Water was out upon, and covered the Terrestrial Globe,  all Fossils whatever that had before obtained any Solidity, were totally dissolved, and their constituent Corpuscles all disjoyned, their Cohesion perfectly ceasing  [A]nd, to be short, all Bodies whatsoever that were either upon the Earth, or that constituted the Mass of it, if not quite down to the Abyss, yet at least to the greatest depth we ever dig: I say all these were assumed up promiscuously into the Water, and sustained in it, in such a manner that the Water, and Bodies in it, together made up one common confused Mass. That at length all the Mass that was thus borne up in the Water, was again precipitated and subsided towards the bottom. That this subsidence happened generally, and as near as possibly could be expected in so great a Confusion, according to the laws of Gravity.

However, the small probability of a similar encounter [of the earth with a comet], can become very great in adding up over a huge sequence of centuries. It is easy to picture to oneself the effects of this impact upon the Earth. The axis and the motion of rotation changed; the seas abandoning their old position to throw themselves toward the new equator; a large part of men and animals drowned in this universal deluge, or destroyed by the violent tremor imparted to the terrestrial globe.

Notwithstanding, therefore, that we have not witnessed of a large continent, yet, as we may predict the future occurrence of such catastrophes, we are authorized to regard them as part of the present order of Nature.

The first drizzling shower is born...
[Then] the flood comes down,
Threatening with deluge this devoted town. ...
Now from all parts the swelling kennels flow,
And bear their trophies with them as they go:
Filth of all hues and odors seem to tell
What street they sailed from, by their sight and smell.
They, as each torrent drives with rapid force,
From Smithfield or St. Pulchres shape their course,
And in huge confluence joined at Snow Hill ridge,
Fall from the conduit prone to Holborn Bridge.
Sweepings from butchers stalls, dung, guts, and blood.
Drowned puppies, stinking sprats, all drenched in mud,
Dead cats, and turnip tops, come tumbling down the flood.

Poem, 'A Description of a City Shower', first published in the Tatler, No. 238 (17 Oct 1710). Reprinted in Pope and Swift's Miscellanies in Prose and Verse (1711, 1721), 225-227. Swift wrote at the time in London that the street surface open gutters (kennels) were the primary means for handling stormwater flows and disposing of every kind of human and animal waste. Devoted means overwhelmed. Smithfield was a market with butchers' shops and cattle and sheep pens. St. Sepulchre refers to a church in Holborn. The Holborn Conduit was taken down in 1746. Below Holborn Bridge ran the Fleet Ditch (a stagnant remnant of the former Fleet River after its water supply had been diverted). It was joined by a stream called Snow Hill. Notes printed with the poem collected in Jay Parini, The Wadsworth Anthology Of Poetry (2005), 723-724.

The whole Terrestrial Globe was taken all to Pieces and dissolved at the Deluge, the Particles of Stone, Marble, and all other solid Fossils being dissevered, taken up into the Water, and there sustained with Sea-Shells and other Animal and Vegetable Bodyes: and that the present Earth consists, and was formed out of that promiscuous Mass of Sand, Earth, Shells, and the rest, falling down again, and subsiding from the Water.

There is not a soul on Earth who can read the deluge of physics publications in its entirety. As a result, it is sad but true that physics has irretrievably fallen apart from a cohesive to a fragmented discipline.  It was not that long ago that people were complaining about two cultures. If we only had it that good today.

In 'The Physical Review Then and Now', in H. Henry Stroke, Physical Review: The First Hundred Years: a Selection of Seminal Papers and Commentaries, Vol. 1, 3. 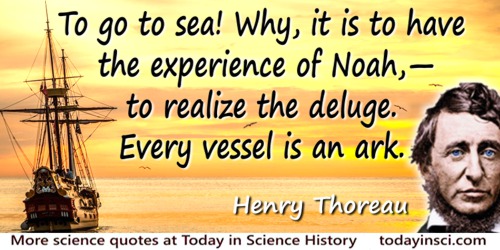 To go to sea! Why, it is to have the experience of Noah,to realize the deluge. Every vessel is an ark.

When the movement of the comets is considered and we reflect on the laws of gravity, it will be readily perceived that their approach to Earth might there cause the most woeful events, bring back the deluge, or make it perish in a deluge of fire, shatter it into small dust, or at least turn it from its orbit, drive away its Moon, or, still worse, the Earth itself outside the orbit of Saturn, and inflict upon us a winter several centuries long, which neither men nor animals would be able to bear. The tails even of comets would not be unimportant phenomena, if in taking their departure left them in whole or part in our atmosphere

You can hardly convince a man of error in a life-time, but must content yourself with the reflection that the progress of science is slow. If he is not convinced, his grand-children may be. The geologists tell us that it took one hundred years to prove that fossils are organic, and one hundred and fifty more, to prove that they are not to be referred to the Noachian deluge.