Beyond these are other suns, giving light and life to systems, not a thousand, or two thousand merely, but multiplied without end, and ranged all around us, at immense distances from each other, attended by ten thousand times ten thousand worlds, all in rapid motion; yet calm, regular and harmoniousall space seems to be illuminated, and every particle of light a world. ... all this vast assemblages of suns and worlds may bear no greater proportion to what lies beyond the utmost boundaries of human vision, than a drop of water to the ocean.

In The Geography of the Heavens and Class-Book of Astronomy (1874), 148 That knowledge is not happiness.

In defining an element let us not take an external boundary, Let us say, e.g., the smallest ponderable quantity of yttrium is an assemblage of ultimate atoms almost infinitely more like each other than they are to the atoms of any other approximating element. It does not necessarily follow that the atoms shall all be absolutely alike among themselves. The atomic weight which we ascribe to yttrium, therefore, merely represents a mean value around which the actual weights of the individual atoms of the element range within certain limits. But if my conjecture is tenable, could we separate atom from atom, we should find them varying within narrow limits on each side of the mean.

In the temple of science are many mansions, and various indeed are they that dwell therein and the motives that have led them thither. Many take to science out of a joyful sense of superior intellectual power; science is their own special sport to which they look for vivid experience and the satisfaction of ambition; many others are to be found in the temple who have offered the products of their brains on this altar for purely utilitarian purposes. Were an angel of the Lord to come and drive all the people belonging to these two categories out of the temple, the assemblage would be seriously depleted, but there would still be some men, of both present and past times, left inside. Our Planck is one of them, and that is why we love him.

It is distinctly proved, by this series of observations, that the reflex function exists in the medulla independently of the brain; in the medulla oblongata independently of the medulla spinalis; and in the spinal marrow of the anterior extremities, of the posterior extremities, and of the tail, independently of that of each other of these parts, respectively. There is still a more interesting and satisfactory mode of performing the experiment: it is to divide the spinal marrow between the nerves of the superior and inferior extremities. We have then two modes of animal life : the first being the assemblage of the voluntary and respiratory powers with those of the reflex function and irritability; the second, the two latter powers only: the first are those which obtain in the perfect animal, the second those which animate the foetus. The phenomena are precisely what might have been anticipated. If the spinal marrow be now destroyed, the irritability alone remains,—all the other phenomena having ceased.

'On the Reflex Function of the Medulla Oblongata and Medulla Spinalis,' Philosophical Transactions of the Royal Society, 1833, 123, 650.

Medicine is an incoherent assemblage of incoherent ideas, and is, perhaps, of all the physiological Sciences, that which best shows the caprice of the human mind. What did I say! It is not a Science for a methodical mind. It is a shapeless assemblage of inaccurate ideas, of observations often puerile, of deceptive remedies, and of formulae as fantastically conceived as they are tediously arranged.

Bichat's General Anatomy, vol. 1, 17. Quoted in Alva Curtis, A Fair Examination and Criticism of All the Medical Systems in Vogue (1855), 1.

Now, in the development of our knowledge of the workings of Nature out of the tremendously complex assemblage of phenomena presented to the scientific inquirer, mathematics plays in some respects a very limited, in others a very important part. As regards the limitations, it is merely necessary to refer to the sciences connected with living matter, and to the ologies generally, to see that the facts and their connections are too indistinctly known to render mathematical analysis practicable, to say nothing of the complexity.

Over the last century, physicists have used light quanta, electrons, alpha particles, X-rays, gamma-rays, protons, neutrons and exotic sub-nuclear particles for this purpose [scattering experiments]. Much important information about the target atoms or nuclei or their assemblage has been obtained in this way. In witness of this importance one can point to the unusual concentration of scattering enthusiasts among earlier Nobel Laureate physicists. One could say that physicists just love to perform or interpret scattering experiments.

Strictly speaking, it is really scandalous that science has not yet clarified the nature of number. It might be excusable that there is still no generally accepted definition of number, if at least there were general agreement on the matter itself. However, science has not even decided on whether number is an assemblage of things, or a figure drawn on the blackboard by the hand of man; whether it is something psychical, about whose generation psychology must give information, or whether it is a logical structure; whether it is created and can vanish, or whether it is eternal. It is not known whether the propositions of arithmetic deal with those structures composed of calcium carbonate [chalk] or with non-physical entities. There is as little agreement in this matter as there is regarding the meaning of the word equal and the equality sign. Therefore, science does not know the thought content which is attached to its propositions; it does not know what it deals with; it is completely in the dark regarding their proper nature. Isnt this scandalous?

Tactics used by many practitioners of pseudoscience: make a large number of vaguely scientific arguments in the hope of making the desired conclusion seem inevitable. It is essential to recognize that a disconnected assemblage of weak arguments does not create a single, strong scientific argument.

The essential character of a species in biology is, that it is a group of living organisms, separated from all other such groups by a set of distinctive characters, having relations to the environment not identical with those of any other group of organisms, and having the power of continuously reproducing its like. Genera are merely assemblages of a number of these species which have a closer resemblance to each other in certain important and often prominent characters than they have to any other species.

The most stable arrangement for an assemblage of molecules is one in which the component atoms and groups are packed together so that (a) the distances between neighbors are close to the equilibrium distance, (b) each atom or group has as many close neighbors as possible, and (c) there are no large unoccupied regions. In other words, each structure tends to be as 'close-packed' as possible, consistent with the 'sizes' of its component atoms or groups. 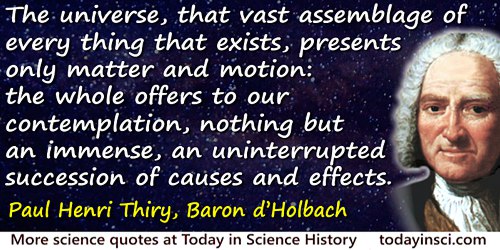 The universe, that vast assemblage of every thing that exists, presents only matter and motion: the whole offers to our contemplation, nothing but an immense, an uninterrupted succession of causes and effects.

The word universe means the general assemblage of all nature, and it also means the heaven that is made up of the constellations and the courses of the stars.