[Advice to would-be trippers, simply:] Go to the meadows, go to the garden, go to the woods. Open your eyes! 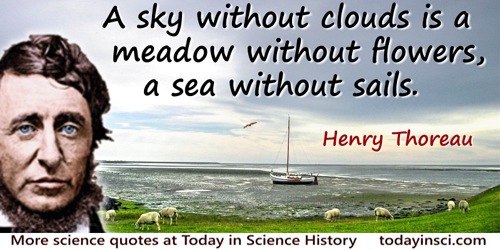 A sky without clouds is a meadow without flowers, a sea without sails.

All the summer long is the swallow a most instructive pattern of unwearied industry and affection; for, from morning to night, while there is a family to be supported, she spends the whole day in skimming close to the ground, and exerting the most sudden turns and quick evolutions. Avenues, and long walks under hedges, and pasture-fields, and mown meadows where cattle graze, are her delight, especially if there are trees interspersed; because in such spots insects most abound. When a fly is taken a smart snap from her bill is heard, resembling the noise at the shutting of a watch case; but the motion of the mandibles are too quick for the eye.

At a distance in the meadow I hear still, at long intervals, the hurried commencement of the bobolink s strain, the bird just dashing into song, which is as suddenly checked, as it were, by the warder of the seasons, and the strain is left incomplete forever. Like human beings they are inspired to sing only for a short season.

I return to the newborn world, and the soft-soil fields,
What their first birthing lifted to the shores
Of light, and trusted to the wayward winds.
First the Earth gave the shimmer of greenery
And grasses to deck the hills; then over the meadows
The flowering fields are bright with the color of springtime,
And for all the trees that shoot into the air.

No matter how intently one studies the hundred little dramas of the woods and meadows, one can never learn all the salient facts about any one of them.

Silently, one by one, in the infinite meadows of heaven,
Blossomed the lovely stars, the forget-me-nots of the angels.

The diversity of life is extraordinary. There is said to be a million or so different kinds of living animals, and hundreds of thousands of kinds of plants. But we dont need to think of the world at large. It is amazing enough to stop and look at a forest or at a meadowat the grass and trees and caterpillars and hawks and deer. How did all these different kinds of things come about; what forces governed their evolution; what forces maintain their numbers and determine their survival or extinction; what are their relations to each other and to the physical environment in which they live? These are the problems of natural history.

The Grand Canyon, is a land of song. Mountains of music swell in the rivers, hills of music billow in the creeks, and meadows of music murmur in the rills that ripple over the rocks. Altogether it is a symphony of multitudinous melodies. All this is the music of waters. The adamant foundations of the earth have been wrought into a sublime harp, upon which the clouds of the heavens play with mighty tempests or with gentle showers.

The poet alone knows astronomy, chemistry, vegetation, and animation, for he does not stop at these facts, but employs them as signs. He knows why the plain, or meadow of space, was strown with these flowers we call suns, and moons, and stars; why the deep is adorned with animals, with men, and gods; for, in every word he speaks he rides on them as the horses of thought.

The process of natural selection has been summed up in the phrase survival of the fittest. This, however, tells only part of the story. Survival of the existing in many cases covers more of the truth. For in hosts of cases the survival of characters rests not on any special usefulness or fitness, but on the fact that individuals possessing these characters have inhabited or invaded a certain area. The principle of utility explains survivals among competing structures. It rarely accounts for qualities associated with geographic distribution.
The nature of animals which first colonize a district must determine what the future fauna will be. From their specific characters, which are neither useful nor harmful, will be derived for the most part the specific characters of their successors.
It is not essential to the meadow lark that he should have a black blotch on the breast or the outer tail-feather white. Yet all meadow larks have these characters just as all shore larks have the tiny plume behind the ear. Those characters of the parent stock, which may be harmful in the new relations, will be eliminated by natural selection. Those especially helpful will be intensified and modified, but the great body of characters, the marks by which we know the species, will be neither helpful nor hurtful. These will be meaningless streaks and spots, variations in size of parts, peculiar relations of scales or hair or feathers, little matters which can neither help nor hurt, but which have all the persistence heredity can give.

Foot-notes to Evolution. A Series of Popular Addresses on the Evolution of Life (1898), 218.

The term community implies a diversity but at the same time a certain organized uniformity in the units. The units are the many individual plants that occur in every community, whether this be a beech-forest, a meadow, or a heath. Uniformity is established when certain atmospheric, terrestrial, and any of the other factors discussed in Section I are co-operating, and appears either because a certain, defined economy makes its impress on the community as a whole, or because a number of different growth-forms are combined to form a single aggregate which has a definite and constant guise.

We have now felled forest enough everywhere, in many districts far too much. Let us restore this one element of material life to its normal proportions, and devise means for maintaining the permanence of its relations to the fields, the meadows and the pastures, to the rain and the dews of heaven, to the springs and rivulets with which it waters down the earth.

When daisies pied and violets blue
And lady-smocks all silver-white
And cuckoo-buds of yellow hue
Do paint the meadows with delight,
The cuckoo then, on every tree,
Mocks married men; for thus sings he, Cuckoo!
Cuckoo, cuckoo! O word of fear,
Unpleasing to a married ear!

When I first ventured into the Gulf of Mexico in the 1950s, the sea appeared to be a blue infinity too large, too wild to be harmed by anything that people could do. I explored powder white beaches, dense marshes, mangrove forests, and miles of sea grass meadows alive with pink sea urchins, tiny shrimps, and seahorses half the size of my little finger.  Then, in mere decades, not millennia, the blue wilderness of my childhood disappeared: biologic change in the space of a lifetime.

When the inclination is not obvious, the mind meanders, or maunders, as a stream in a flat meadow.

While the vaccine discovery was progressive, the joy I felt at the prospect before me of being the instrument destined to take away from the world one of its greatest calamities [smallpox], blended with the fond hope of enjoying independence and domestic peace and happiness, was often so excessive that, in pursuing my favourite subject among the meadows, I have sometimes found myself in a kind of reverie.

Who, of men, can tell
That flowers would bloom, or that green fruit would swell
To melting pulp, that fish would have bright mail,
The earth its dower of river, wood, and vale,
The meadows runnels, runnels pebble-stones,
The seed its harvest, or the lute its tones,
Tones ravishment, or ravishment its sweet,
If human souls did never kiss and greet?