[Advice to would-be trippers, simply:] Go to the meadows, go to the garden, go to the woods. Open your eyes!

A body of work such as Pasteurs is inconceivable in our time: no man would be given a chance to create a whole science. Nowadays a path is scarcely opened up when the crowd begins to pour in.

A work of genius is something like the pie in the nursery song, in which the four and twenty blackbirds are baked. When the pie is opened, the birds begin to sing. Hereupon three fourths of the company run away in a fright; and then after a time, feeling ashamed, they would fain excuse themselves by declaring, the pie stank so, they could not sit near it. Those who stay behind, the men of taste and epicures, say one to another, We came here to eat. What business have birds, after they have been baked, to be alive and singing? This will never do. We must put a stop to so dangerous an innovation: for who will send a pie to an oven, if the birds come to life there? We must stand up to defend the rights of all the ovens in England. Let us have dead birds..dead birds for our money. So each sticks his fork into a bird, and hacks and mangles it a while, and then holds it up and cries, Who will dare assert that there is any music in this birds song?

Co-author with his brother Augustus William Hare Guesses At Truth, By Two Brothers: Second Edition: With Large Additions (1848), Second Series, 86. (The volume is introduced as more than three fourths new. This quote is identified as by Julius; Augustus had died in 1833.)

As you sit on the hillside, or lie prone under the trees of the forest, or sprawl wet-legged on the shingly beach of a mountain stream, the great door, that does not look like a door, opens.

Astronomers have built telescopes which can show myriads of stars unseen before; but when a man looks through a tear in his own eye, that is a lens which opens reaches into the unknown, and reveals orbs which no telescope, however skilfully constructed, could do.

Civilization no longer needs to open up wilderness; it needs wilderness to help open up the still largely unexplored human mind.

I can certainly wish for new, large, and properly constructed instruments, and enough of them, but to state where and by what means they are to be procured, this I cannot do. Tycho Brahe has given Mastlin an instrument of metal as a present, which would be very useful if Mastlin could afford the cost of transporting it from the Baltic, and if he could hope that it would travel such a long way undamaged . One can really ask for nothing better for the observation of the sun than an opening in a tower and a protected place underneath. 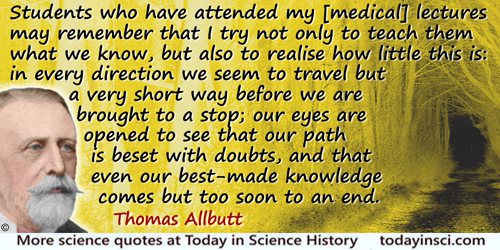 Students who have attended my [medical] lectures may remember that I try not only to teach them what we know, but also to realise how little this is: in every direction we seem to travel but a very short way before we are brought to a stop; our eyes are opened to see that our path is beset with doubts, and that even our best-made knowledge comes but too soon to an end.

The dream is a little hidden door in the innermost and most secret recesses of the psyche, opening into the cosmic night which was psyche long before there was any ego-consciousness, and which will remain psyche no matter how far our ego-consciousness may extend.

The uncertainty where to look for the next opening of discovery brings the pain of conflict and the debility of indecision.

There is no one central problem in philosophy, but countless little problems. Philosophy is like trying to open a safe with a combination lock: each little adjustment of the dials seems to achieve nothing, only when everything is in place does the door open.

From conversation with Rush Rhees (1930) as given by Rush Rhees in Ludwig Wittgenstein: Personal Recollections (1981), 96.