About ten months ago [1609] a report reached my ears that a certain Fleming [Hans Lippershey] had constructed a spyglass, by means of which visible objects, though very distant from the eye of the observer, were distinctly seen as if nearby... Of this truly remarkable effect several experiences were related, to which some persons gave credence while others denied them. A few days later the report was confirmed to me in a letter from a noble Frenchman at Paris, Jacques Badovere, which caused me to apply myself wholeheartedly to enquire into the means by which I might arrive at the invention of a similar instrument. This I did shortly afterwards, my basis being the theory of refraction. First I prepared a tube of lead, at the ends of which I fitted two glass lenses, both plane on one side while on the other side one was spherically convex and the other concave.

All our contemporary philosophers perhaps without knowing it are looking through eyeglasses that Baruch Spinoza polished.

Quoted in Frank Heynick, Jews and Medicine: An Epic Saga (2002), 204. Heynick adds some background that, â€śHeineâ€™s quote alludes to the fact that Spinoza earned his livelihood by grinding lenses.â€ť

Astronomers have built telescopes which can show myriads of stars unseen before; but when a man looks through a tear in his own eye, that is a lens which opens reaches into the unknown, and reveals orbs which no telescope, however skilfully constructed, could do. 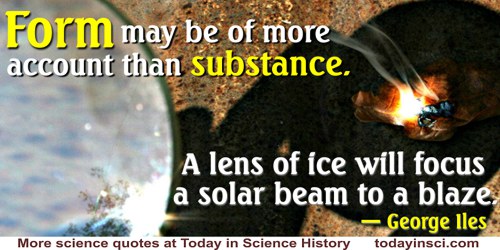 Form may be of more account than substance. A lens of ice will focus a solar beam to a blaze. 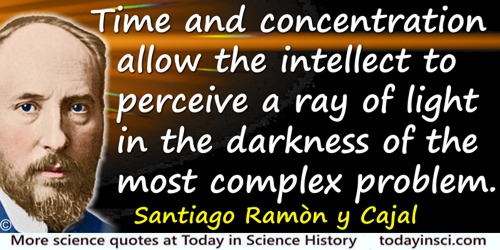 If a photographic plate under the center of a lens focused on the heavens is exposed for hours, it comes to reveal stars so far away that even the most powerful telescopes fail to reveal them to the naked eye. In a similar way, time and concentration allow the intellect to perceive a ray of light in the darkness of the most complex problem.

If the Humours of the Eye by old Age decay, so as by shrinking to make the Cornea and Coat of the Crystalline Humour grow flatter than before, the Light will not be refracted enough, and for want of a sufficient Refraction will not converge to the bottom of the Eye but to some place beyond it, and by consequence paint in the bottom of the Eye a confused Picture, and according to the Indistinctuess of this Picture the Object will appear confused. This is the reason of the decay of sight in old Men, and shews why their Sight is mended by Spectacles. For those Convex glasses supply the defect of plumpness in the Eye, and by increasing the Refraction make the rays converge sooner, so as to convene distinctly at the bottom of the Eye if the Glass have a due degree of convexity. And the contrary happens in short-sighted Men whose Eyes are too plump. For the Refraction being now too great, the Rays converge and convene in the Eyes before they come at the bottom; and therefore the Picture made in the bottom and the Vision caused thereby will not be distinct, unless the Object be brought so near the Eye as that the place where the converging Rays convene may be removed to the bottom, or that the plumpness of the Eye be taken off and the Refractions diminished by a Concave-glass of a due degree of Concavity, or lastly that by Age the Eye grow flatter till it come to a due Figure: For short-sighted Men see remote Objects best in Old Age, and therefore they are accounted to have the most lasting Eyes.

It was on the 25th November 1740 that I cut the first polyp. I put the two parts in a flat glass, which only contained water to the height of four to five lignes. It was thus easy for me to observe these portions of the polyp with a fairly powerful lens.
I shall indicate farther on the precautions I took in making my experiments on these cut polyps and the technique I adopted to cut them. It will suffice to say here that I cut the polyp concerned transversely, a little nearer the anterior than the posterior end. The first part was thus a little shorter than the second.
The instant that I cut the polyp, the two parts contracted so that at first they only appeared like two little grains of green matter at the bottom of the glass in which I put themâ€”for green, as I have already said, is the colour of the first polyps that I possessed. The two parts expanded on the same day on which I separated them. They were very easy to distinguish from one another. The first had its anterior end adorned with the fine threads that serve the polyp as legs and arms, which the second had none.
The extensions of the first part was not the only sign of life that it gave on the same day that it was separated from the other. I saw it move its arms; and the next day, the first time I came to observe it, I found that it had changed its position; and shortly afterwards I saw it take a step. The second part was extended as on the previous day and in the same place. I shook the glass a little to see if it were still alive. This movement made it contract, from which I judged that it was alive. Shortly afterwards it extended again. On the following days I saw the same thing.

Iâ€¦ formerly had two pair of spectacles, which I shifted occasionally, as in travelling I sometimes read, and often wanted to regard the prospects. Finding this change troublesome, and not always sufficiently ready, I had the glasses cut, and half of each kind associated in the same circle. â€¦ By this means, as I wear my spectacles constantly, I have only to move my eyes up or down, as I want to see distinctly far or near, the proper glasses being always ready.

Knowing how things work is important, but I think thatâ€™s an incomplete view of what science literacy is or, at least, should be. Science literacy is an outlook. Itâ€™s more of a lens through which you observe what goes on around you.

On the 1st of August, 1774, I endeavoured to extract air from mercurius calcinates per se [mercury oxide]; and I presently found that, by means of this lens, air was expelled from it very readily. â€¦ I admitted water to it [the extracted air], and found that it was not imbibed by it. But what surprized me more than I can well express, was, that a candle burned in this air with a remarkably vigorous flameâ€¦ I was utterly at a loss how to account for it.

The power of the eye could not be extended further in the opened living animal, hence I had believed that this body of the blood breaks into the empty space, and is collected again by a gaping vessel and by the structure of the walls. The tortuous and diffused motion of the blood in divers directions, and its union at a determinate place offered a handle to this. But the dried lung of the frog made my belief dubious. This lung had, by chance, preserved the redness of the blood in (what afterwards proved to be) the smallest vessels, where by means of a more perfect lens, no more there met the eye the points forming the skin called Sagrino, but vessels mingled annularly. And, so great is the divarication of these vessels as they go out, here from a vein, there from an artery, that order is no longer preserved, but a network appears made up of the prolongations of both vessels. This network occupies not only the whole floor, but extends also to the walls, and is attached to the outgoing vessel, as I could see with greater difficulty but more abundantly in the oblong lung of a tortoise, which is similarly membranous and transparent. Here it was clear to sense that the blood flows away through the tortuous vessels, that it is not poured into spaces but always works through tubules, and is dispersed by the multiplex winding of the vessels.

The year 1918 was the time of the great influenza epidemic, the schools were closed. And this was when, as far as I can remember, the first explicitly strong interest in astronomy developed ... I took a piece of bamboo, and sawed a piece in the middle of each end, to put a couple of spectacle lenses in it. Well, the Pleiades looked nice because the stars were big. I thought I was looking at stars magnified. Well, they werenâ€™t. It was a little thing with two lenses at random on each end, and all you got were extra focal images, big things, but I thought I was looking at star surfaces. I was 12 years old.

This part of optics [perspectiva], when well understood, shows us how we may make things a very long way off appear to be placed very close, and large near things appear very small, and how we may make small things placed at a distance appear as large as we want, so that it is possible for us to read the smallest letters at an incredible distance, or to count sand, or grain, or seeds, or any sort of minute objects.
Describing the use of a lens for magnification.

We have an extraordinary opportunity that has arisen only twice before in the history of Western civilizationâ€”the opportunity to see everything afresh through a new cosmological lens. We are the first humans privileged to see a face of the universe no earlier culture ever imagined.

As co-author with Nancy Ellen Abrams, in The View from the Center of the Universe: Discovering Our Extraordinary Place in the Cosmos (2006), 297.