George Iles
“A lens of ice will focus a solar beam” 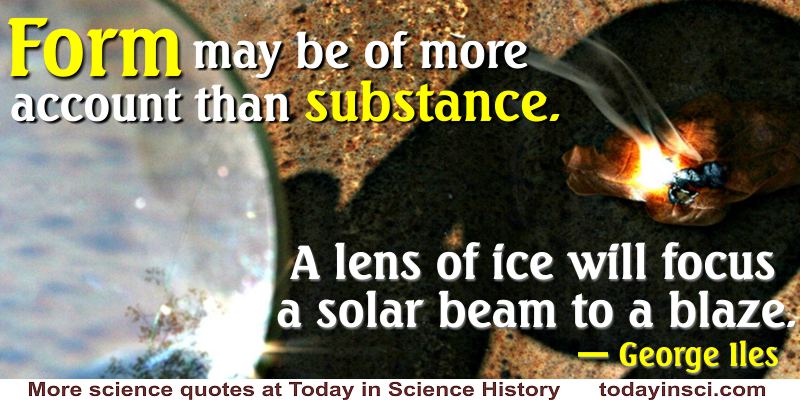 “Form may be of more account than substance. A lens of ice will focus a solar beam to a blaze.”
— George Iles
in Canadian Stories (1918)

George Iles added a chapter to his book Canadian Stories called 'Jottings from a Notebook.' It contained a collection of short epithets, most one or two sentences long. A prefatory note says they “have in part appeared in the Century Magazine, New York”. The subject quote was complete in two sentences, so there is no further context on its subject given by George Iles. He did, however, make another comment about fire in Canadian Stories, when he added a footnote, quoting from his earlier book, Flame, Electricity, and the Camera (1900). Iles contrasted the flame-kindling of man millennia ago with electricity as its modern replacement, for example, in the mineral extraction industry to part copper from its compounds by providing intense heat in the core of a crucible:

“A touch and electricity gives us light … in our lamps, glow in our ovens, and in chemistry serve us either as a trowel or a sword. Electricity carries our burdens indoors and out. It impels as readily the monster loom of a cotton-mill as the sewing-machine of a lady at home. … Electricity to-day does all that fire ever did, does it better, and then accomplishes tasks infinitely beyond the scope of fire, however skillfully applied.”

In other brief 'Jottings' he mentioned “Form” in other ways, such as:

“A calculating engine is one of the most intricate forms of mechanism, a telegraph key one of the simplest. But compare their value.”

Iles also jotted the word “Form” with an excellent metaphor:

“A great book is a mine as well as a mint: it suggests and excites as much thought as it presents in finished form.” 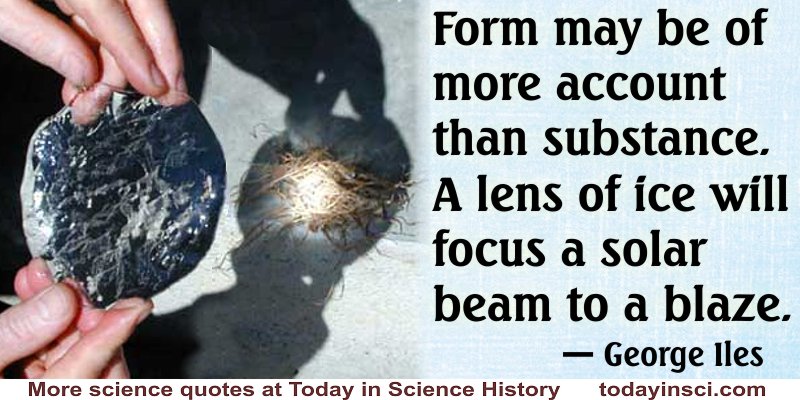 As regards how practical it is to use a lens of ice to make fire, there are several webpages to read, including the well-illustrated Starting Fire With an Ice Lens by Bob Gillis.