As the nineteenth century drew to a close, scientists could reflect with satisfaction that they had pinned down most of the mysteries of the physical world: electricity, magnetism, gases, optics, acoustics, kinetics and statistical mechanics ... all had fallen into order before the. They had discovered the X ray, the cathode ray, the electron, and radioactivity, invented the ohm, the watt, the Kelvin, the joule, the amp, and the little erg.

A Short History of Nearly Everything. In Clifford A. Pickover, Archimedes to Hawking: Laws of Science and the Great Minds Behind Them (2008), 172.

But concerning vision alone is a separate science formed among philosophers, namely, optics, and not concerning any other sense ... It is possible that some other science may be more useful, but no other science has so much sweetness and beauty of utility. Therefore it is the flower of the whole of philosophy and through it, and not without it, can the other sciences be known.

Descartes constructed as noble a road of science, from the point at which he found geometry to that to which he carried it, as Newton himself did after him. ... He carried this spirit of geometry and invention into optics, which under him became a completely new art.

I have no health for a soldier, and as I have no expectation of serving my country in that way, I am spending my time in the old trifling manner, and am so taken with optics, that I do not know whether, if the enemy should invade this part of the country, as Archimedes was slain while making geometrical figures on the sand, so I should die making a telescope.

From Letter (20 Sep 1756) to Thomas Barton, as quoted in Florian Cajori, The Teaching and History of Mathematics in the United States (1890), No. 167, 39. [Note: During the American Revolutionary War, he contributed his skills for military engineering.]

I should not think of devoting less than 20 years to an Epic Poem. Ten to collect materials and warm my mind with universal science. I would be a tolerable Mathematician, I would thoroughly know Mechanics, Hydrostatics, Optics, and Astronomy, Botany, Metallurgy, Fossilism, Chemistry, Geology, Anatomy, Medicinethen the mind of manthen the minds of menin all Travels, Voyages and Histories. So I would spend ten yearsthe next five to the composition of the poemand the five last to the correction of it. So I would write haply not unhearing of the divine and rightly-whispering Voice, which speaks to mighty minds of predestinated Garlands, starry and unwithering.

In things to be seen at once, much variety makes confusion, another vice of beauty. In things that are not seen at once, and have no respect one to another, great variety is commendable, provided this variety transgress not the rules of optics and geometry.

Quoted from the Parentalia in Charles Henry Bellenden Ker, Sir Christopher Wren (1828), 30. Published as a booklet in the series Lives of Eminent Persons (1833) by the Society for the Diffusion of Useful Knowledge. Also in W.H. Auden and L. Kronenberger (eds.) The Viking Book of Aphorisms (1966).

Is it not evident, in these last hundred years (when the Study of Philosophy has been the business of all the Virtuosi in Christendome) that almost a new Nature has been revealed to us? that more errours of the School have been detected, more useful Experiments in Philosophy have been made, more Noble Secrets in Opticks, Medicine, Anatomy, Astronomy, discover'd, than in all those credulous and doting Ages from Aristotle to us? So true it is that nothing spreads more fast than Science, when rightly and generally cultivated.

Modern physics has changed nothing in the great classical disciplines of, for instance, mechanics, optics, and heat. Only the conception of hitherto unexplored regions, formed prematurely from a knowledge of only certain parts of the world, has undergone a decisive transformation. This conception, however, is always decisive for the future course of research.

Now, all causes of natural effects must be expressed by means of lines, angles and figures, for otherwise it is impossible to grasp their explanation. This is evident as follows. A natural agent multiplies its power from itself to the recipient, whether it acts on sense or on matter. This power is sometimes called species, sometimes a likeness, and it is the same thing whatever it may be called; and the agent sends the same power into sense and into matter, or into its own contrary, as heat sends the same thing into the sense of touch and into a cold body. For it does not act, by deliberation and choice, and therefore it acts in a single manner whatever it encounters, whether sense or something insensitive, whether something animate or inanimate. But the effects are diversified by the diversity of the recipient, for when this power is received by the senses, it produces an effect that is somehow spiritual and noble; on the other hand, when it is received by matter, it produces a material effect. Thus the sun produces different effects in different recipients by the same power, for it cakes mud and melts ice. 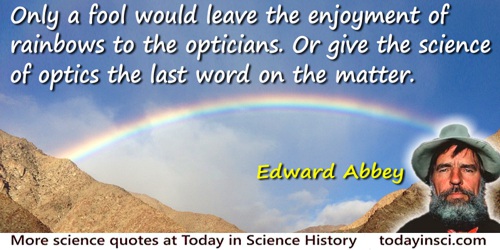 Only a fool would leave the enjoyment of rainbows to the opticians. Or give the science of optics the last word on the matter.

Pictures, propagated by motion along the fibers of the optic nerves in the brain, are the cause of vision.

In Opticks: or, a Treatise of the Reflections, Refractions, Inflections, and Colours of Light (3rd ed., corrected, 1721), 12.

Scientists have come up with a fantastic invention for looking through solid walls. Its called a window.

Found feral on the web attributed (spuriously?) to Richard Feynmann, but Webmaster has not yet found a primary source for Feynmann saying or writing this.

The light of the body is the eye.

The rainbow, the bridge of the gods, proved to be the bridge to our understanding of lightmuch more important.

Epigraph in Isaac Asimovs Book of Science and Nature Quotations (1988), 189.

The science of optics, like every other physical science, has two different directions of progress, which have been called the ascending and the descending scale, the inductive and the deductive method, the way of analysis and of synthesis. In every physical science, we must ascend from facts to laws, by the way of induction and analysis; and we must descend from laws to consequences, by the deductive and synthetic way. We must gather and group appearances, until the scientific imagination discerns their hidden law, and unity arises from variety; and then from unity must reduce variety, and force the discovered law to utter its revelations of the future.

In On a General Method of Expressing the Paths of Light, & of the Planets, by the Coefficients of a Characteristic Function (1833), 7-8. [The spelling as groupe in the original text, has her been corrected to group to avoid an intrusive sic.]

In H.J.J. Winter, 'A Discourse of the Concave Spherical Mirror by Ibn Al-Haitham', Journal of the Royal Asiatic Society of Bengal, 1950, 16, 2.

This part of optics [perspectiva], when well understood, shows us how we may make things a very long way off appear to be placed very close, and large near things appear very small, and how we may make small things placed at a distance appear as large as we want, so that it is possible for us to read the smallest letters at an incredible distance, or to count sand, or grain, or seeds, or any sort of minute objects.
Describing the use of a lens for magnification.

To my knowledge there are no written accounts of Fermis contributions to the [first atomic bomb] testing problems, nor would it be easy to reconstruct them in detail. This, however, was one of those occasions in which Fermis dominion over all physics, one of his most startling characteristics, came into its own. The problems involved in the Trinity test ranged from hydrodynamics to nuclear physics, from optics to thermodynamics, from geophysics to nuclear chemistry. Often they were closely interrelated, and to solve oneit was necessary to understand all the others. Even though the purpose was grim and terrifying, it was one of the greatest physics experiments of all time. Fermi completely immersed himself in the task. At the time of the test he was one of the very few persons (or perhaps the only one) who understood all the technical ramifications.

To what purpose should People become fond of the Mathematicks and Natural Philosophy?  People very readily call Useless what they do not understand. It is a sort of Revenge One would think at first that if the Mathematicks were to be confind to what is useful in them, they ought only to be improv'd in those things which have an immediate and sensible Affinity with Arts, and the rest ought to be neglected as a Vain Theory. But this would be a very wrong Notion. As for Instance, the Art of Navigation hath a necessary Connection with Astronomy, and Astronomy can never be too much improv'd for the Benefit of Navigation. Astronomy cannot be without Optics by reason of Perspective Glasses: and both, as all parts of the Mathematicks are grounded upon Geometry  .

Of the Usefulness of Mathematical Learning (1699)

When the Romans besieged the town [Sicily] (in 212 to 210 B.C.), he [Archimedes] is said to have burned their ships by concentrating on them, by means of mirrors, the suns rays. The story is highly improbable, but is good evidence of the reputation which he had gained among his contemporaries for his knowledge of optics.

While the unique crystal stands on its shelf unmeasured by the goniometer, unslit by the optical lapidary, unanalysed by the chemist,it is merely a piece of furniture, and has no more right to be considered as anything pertaining to science, than a curious china tea-cup on a chimney-piece.

In 'Report on the Progress and Present State of Mineralogy', Report of the British Association for the Advancement of Science (1831 -32), 364-365.

Why grass is green, or why our blood is red
Are mysteries which none have reachd unto.