Dust consisting of fine fibers of asbestos, which are insoluble and virtually indestructible, may become a public health problem in the near future. At a recent international conference on the biological effects of asbestos sponsored by the New York Academy of Sciences, participants pointed out on the one hand that workers exposed to asbestos dust are prone in later life to develop lung cancer, and on the other hand that the use of this family of fibrous silicate compounds has expanded enormously during the past few decades. A laboratory curiosity 100 years ago, asbestos today is a major component of building materials.

First, it must be a pleasure to study the human body the most miraculous masterpiece of nature and to learn about the smallest vessel and the smallest fiber. But second and most important, the medical profession gives the opportunity to alleviate the troubles of the body, to ease the pain, to console a person who is in distress, and to lighten the hour of death of many a sufferer.

Reasons for his choice of medicine as a career, from essay written during his last year in the Gymnasium (high school). As quoted in Leslie Dunn, Rudolf Virchow: Now You Know His Name (2012), 8-9.

From packaging materials, through fibers, foams and surface coatings, to continuous extrusions and large-scale moldings, plastics have transformed almost every aspect of life. Without them, much of modern medicine would be impossible and the consumer electronics and computer industries would disappear. Plastic sewage and water pipes alone have made an immeasurable contribution to public health worldwide.

I became expert at dissecting crayfish. At one point I had a crayfish claw mounted on an apparatus in such a way that I could operate the individual nerves. I could get the several-jointed claw to reach down and pick up a pencil and wave it around. I am not sure that what I was doing had much scientific value, although I did learn which nerve fiber had to be excited to inhibit the effects of another fiber so that the claw would open. And it did get me interested in robotic instrumentation, something that I have now returned to. I am trying to build better micromanipulators for surgery and the like.

I was working with these very long-chain  extended-chain polymers, where you had a lot of benzene rings in them.  Transforming a polymer solution from a liquid to a fiber requires a process called spinning.  We spun it and it spun beautifully. It [Kevlar] was very strong and very stiffunlike anything we had made before. I knew that I had made a discovery. I didnt shout Eureka! but I was very excited, as was the whole laboratory excited, and management was excited, because we were looking for something new. Something different. And this was it.

In 1975, ... [speaking with Shiing Shen Chern], I told him I had finally learned ... the beauty of fiber-bundle theory and the profound Chern-Weil theorem. I said I found it amazing that gauge fields are exactly connections on fiber bundles, which the mathematicians developed without reference to the physical world. I added, this is both thrilling and puzzling, since you mathematicians dreamed up these concepts out of nowhere. He immediately protested: No, no. These concepts were not dreamed up. They were natural and real.

In 'Einstein's Impact on Theoretical Physics', collected in Jong-Ping Hsu, Leonard Hsu (eds.), JingShin Theoretical Physics Symposium in Honor of Professor Ta-You Wu (1998), 70. Reprinted from Physics Today (Jun 1980), 49. The article was adapted from a talk given at the Second Marcel Grossman meeting, held in Trieste, Italy (Jul 1979), in honor of the 100th anniversary of the birth of Albert Einstein.

It is the destiny of wine to be drunk, and it is the destiny of glucose to be oxidized. But it was not oxidized immediately: its drinker kept it in his liver for more than a week, well curled up and tranquil, as a reserve aliment for a sudden effort; an effort that he was forced to make the following Sunday, pursuing a bolting horse. Farewell to the hexagonal structure: in the space of a few instants the skein was unwound and became glucose again, and this was dragged by the bloodstream all the way to a minute muscle fiber in the thigh, and here brutally split into two molecules of lactic acid, the grim harbinger of fatigue: only later, some minutes after, the panting of the lungs was able to supply the oxygen necessary to quietly oxidize the latter. So a new molecule of carbon dioxide returned to the atmosphere, and a parcel of the energy that the sun had handed to the vine-shoot passed from the state of chemical energy to that of mechanical energy, and thereafter settled down in the slothful condition of heat, warming up imperceptibly the air moved by the running and the blood of the runner. 'Such is life,' although rarely is it described in this manner: an inserting itself, a drawing off to its advantage, a parasitizing of the downward course of energy, from its noble solar form to the degraded one of low-temperature heat. In this downward course, which leads to equilibrium and thus death, life draws a bend and nests in it.

Man has generally been preoccupied with obtaining as much production from the landscape as possible, by developing and maintaining early successional types of ecosystems, usually monocultures. But, of course, man does not live by food and fiber alone; he also needs a balanced CO2-O2 atmosphere, the climactic buffer provided by oceans and masses of vegetation, and clean (that is, unproductive) water for cultural and industrial uses. Many essential life-cycle resources, not to mention recreational and esthetic needs, are best provided man by the less 'productive' landscapes. In other words, the landscape is not just a supply depot but is also the oikosthe homein which we must live.

'The Strategy of Ecosystem Development. An Understanding of Ecological Succession Provides a Basis for Resolving Man's Conflict with Nature', Science (1969), 164, 266.

Pictures, propagated by motion along the fibers of the optic nerves in the brain, are the cause of vision.

In Opticks: or, a Treatise of the Reflections, Refractions, Inflections, and Colours of Light (3rd ed., corrected, 1721), 12.

The novel feature of the structure is the manner in which the two chains are held together by the purine and pyrimidine bases. The planes of the bases are perpendicular to the fibre axis. They are joined together in pairs, a single base from one chain being hydrogen-bonded to a single base from the other chain, so that the two lie side by side with identical z-co-ordinates. One of the pair must be 11 purine and the other a pyrimidine for bonding to occur. The hydrogen bonds are made as follows: purine position I to pyrimidine position I; purine position 6 to pyrimidine position 6.
[Co-author with Francis Crick]

The spirit of man is more important than mere physical strength, and the spiritual fiber of a nation than its wealth.

What we call recycling is typically the product losing its quality. Paper gets mixed with other papers, re-chlorinated and contaminated with toxic inks. The fiber length gets shorterand you end up with gray, fuzzy stuff that doesn't really work for you. That's downcycling. Michael Braungart and I coined the term upcycling, meaning that the product could actually get better as it comes through the system.

When Aloisio Galvani first stimulated the nervous fiber by the accidental contact of two heterogeneous metals, his contemporaries could never have anticipated that the action of the voltaic pile would discover to us, in the alkalies, metals of a silvery luster, so light as to swim on water, and eminently inflammable; or that it would become a powerful instrument of chemical analysis, and at the same time a thermoscope and a magnet. 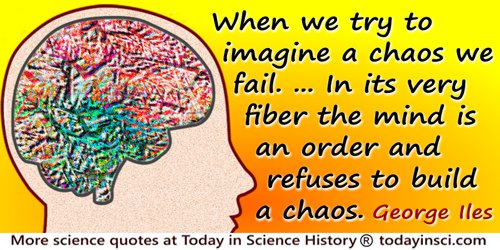 When we try to imagine a chaos we fail. ... In its very fiber the mind is an order and refuses to build a chaos.

Within the nucleus [of a cell] is a network of fibers, a sap fills the interstices of the network. The network resolves itself into a definite number of threads at each division of the cell. These threads we call chromosomes. Each species of animals and plants possesses a characteristic number of these threads which have definite size and sometimes a specific shape and even characteristic granules at different levels. Beyond this point our strongest microscopes fail to penetrate.