By research in pure science I mean research made without any idea of application to industrial matters but solely with the view of extending our knowledge of the Laws of Nature. I will give just one example of the ŌĆśutilityŌĆÖ of this kind of research, one that has been brought into great prominence by the WarŌĆöI mean the use of X-rays in surgery. Now, not to speak of what is beyond money value, the saving of pain, or, it may be, the life of the wounded, and of bitter grief to those who loved them, the benefit which the state has derived from the restoration of so many to life and limb, able to render services which would otherwise have been lost, is almost incalculable. Now, how was this method discovered? It was not the result of a research in applied science starting to find an improved method of locating bullet wounds. This might have led to improved probes, but we cannot imagine it leading to the discovery of X-rays. No, this method is due to an investigation in pure science, made with the object of discovering what is the nature of Electricity. The experiments which led to this discovery seemed to be as remote from ŌĆśhumanistic interestŌĆÖ ŌĆöto use a much misappropriated wordŌĆöas anything that could well be imagined. The apparatus consisted of glass vessels from which the last drops of air had been sucked, and which emitted a weird greenish light when stimulated by formidable looking instruments called induction coils. Near by, perhaps, were great coils of wire and iron built up into electro-magnets. I know well the impression it made on the average spectator, for I have been occupied in experiments of this kind nearly all my life, notwithstanding the advice, given in perfect good faith, by non-scientific visitors to the laboratory, to put that aside and spend my time on something useful.

In Speech made on behalf of a delegation from the Conjoint Board of Scientific Studies in 1916 to Lord Crewe, then Lord President of the Council. In George Paget Thomson, J. J. Thomson and the Cavendish Laboratory in His Day (1965), 167-8.

How greatly would the heroes and statesmen of antiquity have despised the labours of that man who devoted his life to investigate the properties of the magnet! Little could they anticipate that this humble mineral was destined to change the very form and condition of human society in every quarter of the globe.

In 'Observations on the Study of Mineralogy', The Philosophical Magazine and Journal (Jul 1819), 54, 46. Slightly edited and used by Joseph Henry in 'Introductory Lecture on Chemistry' (Jan-Mar 1832), The Papers of Joseph Henry, Vol. 1, 396.

In that memorable year, 1822: Oersted, a Danish physicist, held in his hands a piece of copper wire, joined by its extremities to the two poles of a Volta pile. On his table was a magnetized needle on its pivot, and he suddenly saw (by chance you will say, but chance only favours the mind which is prepared) the needle move and take up a position quite different from the one assigned to it by terrestrial magnetism. A wire carrying an electric current deviates a magnetized needle from its position. That, gentlemen, was the birth of the modern telegraph.
Le hasard favorise lŌĆÖesprit prepar├®

MAGNET, n. Something acted upon by magnetism.
MAGNETISM, n. Something acting upon a magnet.
The two definitions immediately foregoing are condensed from the works of one thousand eminent scientists, who have illuminated the subject with a great white light, to the inexpressible advancement of human knowledge.

Man cannot afford to be a naturalist, to look at Nature directly, but only with the side of his eye. He must look through and beyond her, to look at her is fatal as to look at the head of Medusa. It turns the man of science to stone. I feel that I am dissipated by so many observations. I should be the magnet in the midst of all this dust and filings. 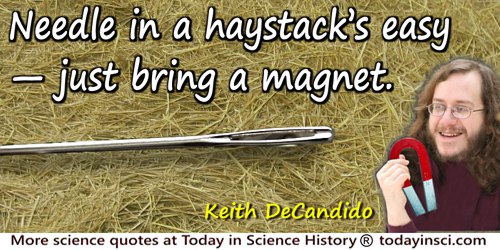 Now that is the wisdom of a man, in every instance of his labor, to hitch his wagon to a star, and see his chore done by the gods themselves. That is the way we are strong, by borrowing the might of the elements. The forces of steam, gravity, galvanism, light, magnets, wind, fire, serve us day by day and cost us nothing.

Oersted would never have made his great discovery of the action of galvanic currents on magnets had he stopped in his researches to consider in what manner they could possibly be turned to practical account; and so we would not now be able to boast of the wonders done by the electric telegraphs. Indeed, no great law in Natural Philosophy has ever been discovered for its practical implications, but the instances are innumerable of investigations apparently quite useless in this narrow sense of the word which have led to the most valuable results.

From Silvanus Phillips Thompson, 'Introductory Lecture to the Course on Natural Philosophy', The Life of Lord Kelvin (1910), Vol. 1, Appendix to Chap. 5, 249.

Ohm found that the results could be summed up in such a simple law that he who runs may read it, and a schoolboy now can predict what a Faraday then could only guess at roughly. By Ohm's discovery a large part of the domain of electricity became annexed by Coulomb's discovery of the law of inverse squares, and completely annexed by Green's investigations. Poisson attacked the difficult problem of induced magnetisation, and his results, though differently expressed, are still the theory, as a most important first approximation. Ampere brought a multitude of phenomena into theory by his investigations of the mechanical forces between conductors supporting currents and magnets. Then there were the remarkable researches of Faraday, the prince of experimentalists, on electrostatics and electrodynamics and the induction of currents. These were rather long in being brought from the crude experimental state to a compact system, expressing the real essence. Unfortunately, in my opinion, Faraday was not a mathematician. It can scarely be doubted that had he been one, he would have anticipated much later work. He would, for instance, knowing Ampere's theory, by his own results have readily been led to NeumannŌĆÖs theory, and the connected work of Helmholtz and Thomson. But it is perhaps too much to expect a man to be both the prince of experimentalists and a competent mathematician.

Something is as little explained by means of a distinctive vital force as the attraction between iron and magnet is explained by means of the name magnetism. We must therefore firmly insist that in the organic natural sciences, and thus also in botany, absolutely nothing has yet been explained and the entire field is still open to investigation as long as we have not succeeded in reducing the phenomena to physical and chemical laws.

The magnetŌĆÖs name the observing Grecians drew
From the magnetic region where it grew.

The most convincing proof of the conversion of heat into living force [vis viva] has been derived from my experiments with the electro-magnetic engine, a machine composed of magnets and bars of iron set in motion by an electrical battery. I have proved by actual experiment that, in exact proportion to the force with which this machine works, heat is abstracted from the electrical battery. You see, therefore, that living force may be converted into heat, and that heat may be converted into living force, or its equivalent attraction through space.

The word ŌĆ£electromagneticŌĆØ which is used to characterize the phenomena produced by the conducting wires of the voltaic pile, ŌĆ” were those which M. Oersted discovered, exhibited by an electric current and a magnet. I have determined to use the word electrodynamic in order to unite under a common name all these phenomena, and particularly to designate those which I have observed between two voltaic conductors. It expresses their true character, that of being produced by electricity in motion: while the electric attractions and repulsions, which have been known for a long time, are electrostatic phenomena produced by the unequal distribution of electricity at rest in the bodies in which they are observed.

Attributed. Quoted in Speaking of Science: Notable Quotes on Science, Engineering, and the Environment (2000), 53.

Tyndall declared that he saw in Matter the promise and potency of all forms of life, and with his Irish graphic lucidity made a picture of a world of magnetic atoms, each atom with a positive and a negative pole, arranging itself by attraction and repulsion in orderly crystalline structure. Such a picture is dangerously fascinating to thinkers oppressed by the bloody disorders of the living world. Craving for purer subjects of thought, they find in the contemplation of crystals and magnets a happiness more dramatic and less childish than the happiness found by mathematicians in abstract numbers, because they see in the crystals beauty and movement without the corrupting appetites of fleshly vitality.

In 'Sir Isaac Newton', PeopleŌĆÖs Book of Biography: Or, Short Lives of the Most Interesting Persons of All Ages and Countries (1868), 255.

When Aloisio Galvani first stimulated the nervous fiber by the accidental contact of two heterogeneous metals, his contemporaries could never have anticipated that the action of the voltaic pile would discover to us, in the alkalies, metals of a silvery luster, so light as to swim on water, and eminently inflammable; or that it would become a powerful instrument of chemical analysis, and at the same time a thermoscope and a magnet.

When men are ignorant of the natural causes producing things, and cannot even explain them by analogy with similar things, they attribute their own nature to them. The vulgar, for example, say the magnet loves the iron.