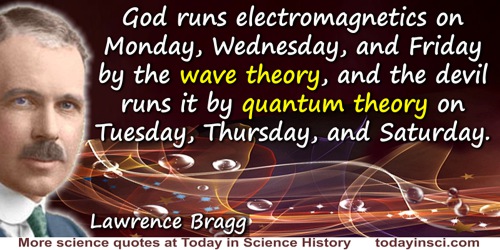 God runs electromagnetics on Monday, Wednesday, and Friday by the wave theory, and the devil runs it by quantum theory on Tuesday, Thursday, and Saturday.

I happen to have discovered a direct relation between magnetism and light, also electricity and light, and the field it opens is so large and I think rich.

I have long held an opinion, almost amounting to conviction, in common I believe with many other lovers of natural knowledge, that the various forms under which the forces of matter are made manifest have one common origin; or, in other words, are so directly related and mutually dependent, that they are convertible, as it were, one into another, and possess equivalents of power in their action.

Paper read to the Royal Institution (20 Nov 1845). 'On the Magnetization of Light and the Illumination of Magnetic Lines of Force', Series 19. In Experimental Researches in Electricity (1855), Vol. 3, 1. Reprinted from Philosophical Transactions (1846), 1.

In that memorable year, 1822: Oersted, a Danish physicist, held in his hands a piece of copper wire, joined by its extremities to the two poles of a Volta pile. On his table was a magnetized needle on its pivot, and he suddenly saw (by chance you will say, but chance only favours the mind which is prepared) the needle move and take up a position quite different from the one assigned to it by terrestrial magnetism. A wire carrying an electric current deviates a magnetized needle from its position. That, gentlemen, was the birth of the modern telegraph.
Le hasard favorise lesprit preparé

Inaugural Address as newly appointed Professor and Dean (Sep 1854) at the opening of the new Faculté des Sciences at Lille (7 Dec 1854). In René Vallery-Radot, The Life of Pasteur, translated by Mrs. R. L. Devonshire (1919), 76.

It appears, according to the reported facts, that the electric conflict is not restricted to the conducting wire, but that it has a rather extended sphere of activity around it  the nature of the circular action is such that movements that it produces take place in directions precisely contrary to the two extremities of a given diameter. Furthermore, it seems that the circular movement, combined with the progressive movement in the direction of the length of the conjunctive wire, should form a mode of action which is exerted as a helix around this wire as an axis.

It seems to me, he says, that the test of Do we or not understand a particular subject in physics? is, Can we make a mechanical model of it? I have an immense admiration for Maxwells model of electromagnetic induction. He makes a model that does all the wonderful things that electricity docs in inducing currents, etc., and there can be no doubt that a mechanical model of that kind is immensely instructive and is a step towards a definite mechanical theory of electromagnetism.

My theory of electrical forces is that they are called into play in insulating media by slight electric displacements, which put certain small portions of the medium into a state of distortion which, being resisted by the elasticity of the medium, produces an electromotive force ... I suppose the elasticity of the sphere to react on the electrical matter surrounding it, and press it downwards.
From the determination by Kohlrausch and Weber of the numerical relation between the statical and magnetic effects of electricity, I have determined the elasticity of the medium in air, and assuming that it is the same with the luminiferous ether I have determined the velocity of propagation of transverse vibrations.
The result is
193088 miles per second
(deduced from electrical & magnetic experiments).
Fizeau has determined the velocity of light
= 193118 miles per second
by direct experiment.
This coincidence is not merely numerical. I worked out the formulae in the country, before seeing Webers [sic] number, which is in millimetres, and I think we have now strong reason to believe, whether my theory is a fact or not, that the luminiferous and the electromagnetic medium are one.

Ohm found that the results could be summed up in such a simple law that he who runs may read it, and a schoolboy now can predict what a Faraday then could only guess at roughly. By Ohm's discovery a large part of the domain of electricity became annexed by Coulomb's discovery of the law of inverse squares, and completely annexed by Green's investigations. Poisson attacked the difficult problem of induced magnetisation, and his results, though differently expressed, are still the theory, as a most important first approximation. Ampere brought a multitude of phenomena into theory by his investigations of the mechanical forces between conductors supporting currents and magnets. Then there were the remarkable researches of Faraday, the prince of experimentalists, on electrostatics and electrodynamics and the induction of currents. These were rather long in being brought from the crude experimental state to a compact system, expressing the real essence. Unfortunately, in my opinion, Faraday was not a mathematician. It can scarely be doubted that had he been one, he would have anticipated much later work. He would, for instance, knowing Ampere's theory, by his own results have readily been led to Neumanns theory, and the connected work of Helmholtz and Thomson. But it is perhaps too much to expect a man to be both the prince of experimentalists and a competent mathematician.

Professor Ayrton said that we were gradually coming within thinkable distance of the realization of a prophecy he had ventured to make four years before, of a time when, if a person wanted to call to a friend he knew not where, he would call in a very loud electromagnetic voice, heard by him who had the electromagnetic ear, silent to him who had it not. Where are you? he would say. A small reply would come, I am at the bottom of a coalmine, or crossing the Andes, or in the middle of the Atlantic. Or, perhaps in spite of all the calling, no reply would come, and the person would then know that his friend was dead. Think of what this would mean ... a real communication from a distance based on true physical laws.
[His prophecy of cell phones, as a comment on Marconi's paper, 'Syntonic Wireless Telegraphy,' read before the Society of Arts, 15 May 1901, about his early radio signal experiments.]

From Engineering Magazine (Jul 1901) as described in 'Marconi and his Transatlantic Signal', The Century Illustrated Monthly Magazine (1902), Vol. 63, 782.

Science has thus, most unexpectedly, placed in our hands a new power of great but unknown energy. It does not wake the winds from their caverns; nor give wings to water by the urgency of heat; nor drive to exhaustion the muscular power of animals; nor operate by complicated mechanism; nor summon any other form of gravitating force, but, by the simplest means—the mere contact of metallic surfaces of small extent, with feeble chemical agents, a power everywhere diffused through nature, but generally concealed from our senses, is mysteriously evolved, and by circulation in insulated wires, it is still more mysteriously augmented, a thousand and a thousand fold, until it breaks forth with incredible energy.

Comment upon 'The Notice of the Electro-Magnetic Machine of Mr. Thomas Davenport, of Brandon, near Rutland, Vermont, U.S.', The Annals of Electricity, Magnetism, & Chemistry; and Guardian of Experimental Science (1838), 2, 263.

The importance of C.F. Gauss for the development of modern physical theory and especially for the mathematical fundament of the theory of relativity is overwhelming indeed; also his achievement of the system of absolute measurement in the field of electromagnetism. In my opinion it is impossible to achieve a coherent objective picture of the world on the basis of concepts which are taken more or less from inner psychological experience.

The most convincing proof of the conversion of heat into living force [vis viva] has been derived from my experiments with the electro-magnetic engine, a machine composed of magnets and bars of iron set in motion by an electrical battery. I have proved by actual experiment that, in exact proportion to the force with which this machine works, heat is abstracted from the electrical battery. You see, therefore, that living force may be converted into heat, and that heat may be converted into living force, or its equivalent attraction through space.

There is nothing in the world except empty curved space. Matter, charge, electromagnetism, and other fields are only manifestations of the curvature of space.

To cross the seas, to traverse the roads, and to work machinery by galvanism, or rather electro-magnetism, will certainly, if executed, be the most noble achievement ever performed by man.

In Elements of Electro-Metallurgy: or The Art of Working in Metals by the Galvanic Fluid (1841), 147.

We can scarcely avoid the inference that light consists in the transverse undulations of the same medium which is the cause of electric and magnetic phenomena.