Der bis zur Vorrede, die ihn abweist, gelangte Leser hat das Buch für baares Geld gekauft und frägt, was ihn schadlos hält?  Meine letzte Zuflucht ist jetzt, ihn zu erinnern, daß er ein Buch, auch ohne es gerade zu lesen, doch auf mancherlei Art zu benutzen weiß. Es kann, so gut wie viele andere, eine Lücke seiner Bibliothek ausfüllen, wo es sich, sauber gebunden, gewiß gut ausnehmen wird. Oder auch er kann es seiner gelehrten Freundin auf die Toilette, oder den Theetisch legen. Oder endlich er kann ja, was gewiß das Beste von Allem ist und ich besonders rathe, es recensiren.
The reader who has got as far as the preface and is put off by that, has paid money for the book, and wants to know how he is to be compensated. My last refuge now is to remind him that he knows of various ways of using a book without precisely reading it. It can, like many another, fill a gap in his library, where, neatly bound, it is sure to look well. Or he can lay it on the dressing-table or tea-table of his learned lady friend. Or finally he can review it; this is assuredly the best course of all, and the one I specially advise.

In Preface, written at Dresden in August 1818, first German edition, Die Welt als Wille und Vorstellung, 4 Bücher nebst einem Anhange der die Kritik der Kentischen Philosophie (1819), xv-xvi. As translated by E.F.J. Payne in The World as Will and Representation (1958, 1969), Vol. 1, xvii. In the preface, Schopenhauer is joking that some readers of his book may find his work does not interest them.

[About John Evershed] There is much in our medallists career which is a reminder of the scientific life of Sir William Huggins. They come from the same English neighbourhood and began as amateurs of the best kind. They both possess the same kind of scientific aptitude.

A mathematical problem should be difficult in order to entice us, yet not completely inaccessible, lest it mock at our efforts. It should be to us a guide post on the mazy paths to hidden truths, and ultimately a reminder of our pleasure in the successful solution.

As a reminder to the prospective observer of extraterrestrial radio noise, I shall conclude by offering the following motto for radio astronomers (with apologies to Gertrude Stein): Signals in the grass, alas!

Because basic learning takes place so earlyasthe classic musical South Pacific reminds us, You've got to be taught before its too late, before you are six or seven or eight; youve got to be carefully taught,we must strengthen our pre-school program, especially Headstart, Kindergarten and Day Care.

In address, to the Economic Club of Detroit (14 Jan 1990), 'Where Do We Go From Here?' on the massiechairs.com website. 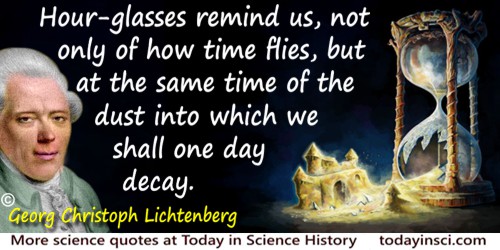 Hour-glasses remind us, not only of how time flies, but at the same time of the dust into which we shall one day decay.

It is not always the truth that tells us where to look for new knowledge. We dont search for the penny under the lamp post where the light is. We know we are more likely to find it out there in the darkness. My favorite way of expressing this notion to graduate students who are trying to do very hard experiments is to remind them that God loves the noise as much as he does the signal.

Lives of great men remind us
We can make our lives sublime,
And departing leave behind us
Footprints on the sands of time.

From poem, 'A Psalm of Life', collected in Poetical Works of Henry Wadsworth Longfellow (1856), 73.

One is constantly reminded of the infinite lavishness and fertility of Nature—inexhaustible abundance amid what seems enormous waste. And yet when we look into any of her operations that lie within reach of our minds, we learn that no particle of her material is wasted or worn out. It is eternally flowing from use to use, beauty to yet higher beauty; and we soon cease to lament waste and death, and rather rejoice and exult in the imperishable, unspendable wealth of the universe.

This speaker reminds me of my childhood in Budapest. There were gypsy magicians who came to town to entertain us children. But as I recollect, there was one important difference: the gypsy only seemed to violate the laws of nature, he never really violated them!

As quoted by William R. Sears in 'Some Recollections of Theodore von Kármán', Address to the Symposium in Memory of Theodore von Kármán, Society for Industrial and Applied Mathematics, National Meeting (13-14 May 1964), Washington, D.C. Printed in Journal of the Society for Industrial and Applied Mathematics (Mar 1965), 13>, No. 1, 178. These are likely not verbatim words of Karman, but as recollected by Sears giving an example of von Kármáns biting anecdotes at public meetings when criticizing a paper he thought really misleading pseudoscience.

To be whole. To be complete. Wildness reminds us what it means to be human, what we are connected to rather than what we are separate from.