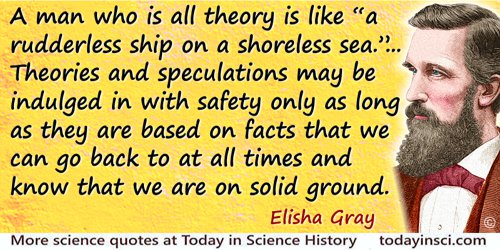 A man who is all theory is like â€śa rudderless ship on a shoreless sea.â€ť â€¦ Theories and speculations may be indulged in with safety only as long as they are based on facts that we can go back to at all times and know that we are on solid ground.

As I looked down, I saw a large river meandering slowly along for miles, passing from one country to another without stopping. I also saw huge forests, extending along several borders. And I watched the extent of one ocean touch the shores of separate continents. Two words leaped to mind as I looked down on all this: commonality and interdependence. We are one world.

I am the daughter of earth and water, And the nursling of the sky;
I pass through the pores of the ocean and shores;
I change, but I cannot die.
For after the rain when with never a stain,
The pavilion of Heaven is bare,
And the winds and sunbeams with their convex gleams,
Build up the blue dome of air,
I silently laugh at my own cenotaph, And out of the caverns of rain,
Like a child from the womb, like a ghost from the tomb,
I arise and unbuild it again.

I have sat by night beside a cold lake
And touched things smoother than moonlight on still water,
But the moon on this cloud sea is not human,
And here is no shore, no intimacy,
Only the start of space, the road to suns.

I should study Natureâ€™s laws in all their crossings and unions; I should follow magnetic streams to their source and follow the shores of our magnetic oceans. I should go among the rays of the aurora, and follow them to their beginnings, and study their dealings and communications with other powers and expressions of matter.

If you throw a stone in a pond... the waves which strike against the shores are thrown back towards the spot where the stone struck; and on meeting other waves they never intercept each otherâ€™s course... In a small pond one and the same stroke gives birth to many motions of advance and recoil.

Is it in Time to hide Eternity?
And why not in an Atom on the Shore,
To cover Ocean? or a Mote, the Sun?

Is this your triumphâ€”this your proud applause,
Children of Truth, and champions of her cause?
For this has Science searchâ€™d, on weary wing,
By shore and seaâ€”each mute and living thing!

It is impossible not to feel stirred at the thought of the emotions of man at certain historic moments of adventure and discoveryâ€”Columbus when he first saw the Western shore, Pizarro when he stared at the Pacific Ocean, Franklin when the electric spark came from the string of his kite, Galileo when he first turned his telescope to the heavens. Such moments are also granted to students in the abstract regions of thought, and high among them must be placed the morning when Descartes lay in bed and invented the method of co-ordinate geometry.

It is related of the Socratic philosopher Aristippus that, being shipwrecked and cast ashore on the coast of the Rhodians, he observed geometrical figures drawn thereon, and cried out to his companions:"Let us be of good cheer, for I see the traces of man."

Leave your home, O youth, and seek out alien shores. A wider range of life has been ordained for you.

Most people â€¦ do not know that when the white man came Honolulu was a treeless, sandy plain, with a fringe of cocoanut trees along the shore. Honolulu, as it is to-day, is the creation of the foreigner. It is his handiwork. Walk into one of the numerous yards where plants and trees and vines are growing, as though on their native soil, and you will find that every one of them has been imported within a comparatively recent period. â€¦ Here is the rubber tree, the banyan, the baobab, the litchee, the avocado, the mango, and palms innumerable.

In John Leavitt Stevens and W.B. Oleson, 'Honolulu, and Other Places of Interest', Picturesque Hawaii (1894), 50.

One doesnâ€™t discover new lands without consenting to lose sight of the shore for a very long time.

Quietly, like a night bird, floating, soaring, wingless.
We glide from shore to shore, curving and falling
but not quite touching;
Earth: a distant memory seen in an instant of repose,
crescent shaped, ethereal, beautiful,
I wonder which part is home, but I know it doesnâ€™t matter . . .
the bond is there in my mind and memory;
Earth: a small, bubbly balloon hanging delicately
in the nothingness of space.

The edge of the sea is a strange and beautiful place. All through the long history of Earth it has been an area of unrest where waves have broken heavily against the land, where the tides have pressed forward over the continents, receded, and then returned. For no two successive days is the shore line precisely the same. Not only do the tides advance and retreat in their eternal rhythms, but the level of the sea itself is never at rest. It rises or falls as the glaciers melt or grow, as the floor of the deep ocean basins shifts under its increasing load of sediments, or as the Earthâ€™s crust along the continental margins warps up or down in adjustment to strain and tension. Today a little more land may belong to the sea, tomorrow a little less. Always the edge of the sea remains an elusive and indefinable boundary.

The great object of all knowledge is to enlarge and purify the soul, to fill the mind with noble contemplations, to furnish a refined pleasure, and to lead our feeble reason from the works of nature up to its great Author and Sustainer. Considering this as the ultimate end of science, no branch of it can surely claim precedence of Astronomy. No other science furnishes such a palpable embodiment of the abstractions which lie at the foundation of our intellectual system; the great ideas of time, and space, and extension, and magnitude, and number, and motion, and power. How grand the conception of the ages on ages required for several of the secular equations of the solar system; of distances from which the light of a fixed star would not reach us in twenty millions of years, of magnitudes compared with which the earth is but a foot-ball; of starry hostsâ€”suns like our ownâ€”numberless as the sands on the shore; of worlds and systems shooting through the infinite spaces.

Oration at Inauguration of the Dudley Astronomical Observatory, Albany (28 Jul 1856). Text published as The Uses of Astronomy (1856), 36.

There is a pleasure in the pathless woods, there is a rapture on the lonely shore, there is society, where none intrudes. By the deep sea, and music in its roars; I love not man the less, but nature more.

Unlike the boundaries of the sea by the shorelines, the â€śocean of airâ€ť laps at the border of every state, city, town and home throughout the world.

We are not at the end of our progress but at the beginning. We have but reached the shores of a great unexplored continent. We cannot turn back. â€¦ It is manâ€™s destiny to ponder on the riddle of existence and, as a by-product of his wonderment, to create a new life on this earth.

We cannot take one step in geology without drawing upon the fathomless stores of by-gone time.

Letter 2 to William Wordsworth. Quoted in the appendix to W. Wordsworth, A Complete Guide to the Lakes, Comprising Minute Direction for the Tourist, with Mr Wordsworth's Description of the Scenery of the County and Three Letters upon the Geology of the Lake District (1842), 18-9.

We have found that where science has progressed the farthest, the mind has but regained from nature that which the mind has put into nature.
We have found a strange foot-print on the shores of the unknown. We have devised profound theories, one after another, to account for its origin. At last, we have succeeded in reconstructing the creature that made the foot-print. And Lo! it is our own.

Concluding sentences in Space, Time and Gravitation: An Outline of the General Relativity Theory (1921), 200-201