A person who is religiously enlightened appears to me to be one who has, to the best of his ability, liberated himself from the fetters of his selfish desires and is preoccupied with thoughts, feelings, and aspirations to which he clings because of their superpersonal value. It seems to me that what is important is the force of this superpersonal content and the depth of the conviction concerning its overpowering meaningfulness, regardless of whether any attempt is made to unite this content with a divine Being, for otherwise it would not be possible to count Buddha and Spinoza as religious personalities. Accordingly, a religious person is devout in the sense that he has no doubt of the significance and loftiness of those superpersonal objects and goals which neither require nor are capable of rational foundation. They exist with the same necessity and matter-of-factness as he himself. In this sense religion is the age-old endeavor of mankind to become clearly and completely conscious of these values and goals and constantly to strengthen and extend their effect. If one conceives of religion and science according to these definitions then a conflict between them appears impossible. For science can only ascertain what is, but not what should be, and outside of its domain value judgments of all kinds remain necessary.

Florey was not an easy personality. His drive and ambition were manifest from the day he arrived ... He could be ruthless and selfish; on the other hand, he could show kindliness, a warm humanity and, at times, sentiment and a sense of humour. He displayed utter integrity and he was scathing of humbug and pretence. His attitude was always—&ldqoYou must take me as you find me” But to cope with him at times, you had to do battle, raise your voice as high as his and never let him shout you down. You had to raise your pitch to his but if you insisted on your right he was always, in the end, very fair. I must say that at times, he went out of his way to cut people down to size with some very destructive criticism. But I must also say in the years I knew him he did not once utter a word of praise about himself.

Personal communication (1970) to Florey's Australian biographer, Lennard Bickel. By letter, Drury described his experience as a peer, being a research collaborator while Florey held a Studentship at Cambridge in the 1920s. This quote appears without naming Drury, in Eric Lax, The Mold in Dr. Florey's Coat: The Story of the Penicillin Miracle (2004), 40. Dury is cited in Lennard Bickel, Rise Up to Life: A Biography of Howard Walter Florey Who Gave Penicillin to the World (1972), 24. Also in Eric Lax

If entomologists have things backward, their errors have spawned a host of others central to modern evolutionary science.  E.O. Wilson is  the founder of a rich and fruitful disciplinesociobiology. And sociobiology has  helped lay the groundwork for the dogma of the selfish gene.

It is just as foolish to complain that people are selfish and treacherous as it is to complain that the magnetic field does not increase unless the electric field has a curl. Both are laws of nature.

Nature may be as selfishly studied as trade. Astronomy to the selfish becomes astrology; psychology, mesmerism (with intent to show where our spoons are gone); and anatomy and physiology become phrenology and palmistry.

Perhaps it is better in this present world of ours that a revolutionary idea or invention instead of being helped and patted be hampered and ill-treated in its adolescenceby want of means, by selfish interest, pedantry, stupidity and ignorance; that it be attacked and stifled; that it pass through bitter trials and tribulations, through the heartless strife of commercial existence. ... So all that was great in the past was ridiculed, condemned, combatted, suppressedonly to emerge all the more powerfully, all the more triumphantly from the struggle.

Shall an invention be patented or donated to the public freely? I have known some well-meaning scientific men to look askance at the patenting of inventions, as if it were a rather selfish and ungracious act, essentially unworthy. The answer is very simple. Publish an invention freely, and it will almost surely die from lack of interest in its development. It will not be developed and the world will not be benefited. Patent it, and if valuable, it will be taken up and developed into a business.

The late Alan Gregg pointed out that human population growth within the ecosystem was closely analogous to the growth of malignant tumor cells within an organism: that man was acting like a cancer on the biosphere. The multiplication of human numbers certainly seems wild and uncontrolled Four million a monththe equivalent of the population of Chicago We seem to be doing all right at the moment; but if you could ask cancer cells, I suspect they would think they were doing fine. But when the organism dies, so do they; and for our own, selfish, practical, utilitarian reasons, I think we should be careful about how we influence the rest of the ecosystem. 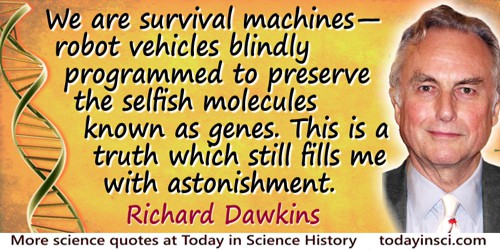 We are survival machinesrobot vehicles blindly programmed to preserve the selfish molecules known as genes. This is a truth which still fills me with astonishment.