Joseph B. Strauss
“Ask of the steel, each strut and wire, … What gave it force and power.” 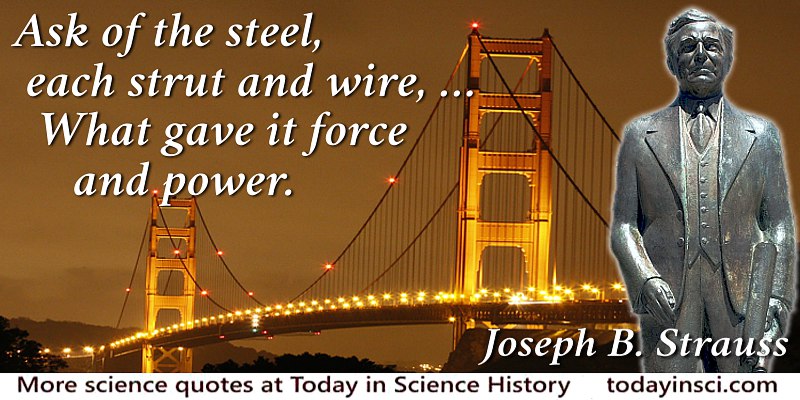 “At last the mighty task is done; / Resplendent in the western sun / The Bridge looms mountain high; … / Its towers pierce the sky. … / Ask of the steel, each strut and wire, / Ask of the searching, purging fire, … / Ask of each single, stalwart part, / What gave it force and power.”
— Joseph B. Strauss
Written upon completion of the building of the Golden Gate Bridge, May 1937.

In May 1937, the Golden Gate Bridge was completed. It was twenty years since Joseph Baermann Strauss had stood on the hill above Fort Point in San Francisco and dreamed of spanning the Golden Gate strait he viewed below stretching into the Pacific Ocean. He became the Chief Engineer for its construction. When it opened, the San Francisco and Bay Area celebrated with vibrant activities, and though Strauss was weak and palsied, he was the hero of the day. He had endured through obstacles, delays and increasing costs.

During his student days at the University of Cincinnati, Ohio, he was the class poet. So it was not usual for him to turn to writing poetry in celebration for opening day. His poem was published in a special section of the San Francisco News (26 May 1937)1. But he was exhausted; it would be his last. Strauss died from a heart attack just one year later, shortly after signing his final Engineer’s Report. He was 68.

A seven-foot-tall statue of Joseph B. Strauss, funded by his widow in 1941, now stands at the north tip of Golden Gate Park. (In life, he was actually five foot three inches tall.) His widow had the pedestal inscribed naming him "The Man Who Built the Bridge."

Strauss has been described as obsessed with claiming credit. Though it was his Strauss Engineering Corporation that was the contractor, in truth, it was two other visionary men, its vice president Charles Ellis, and Leon Moissief, who were the real engineers that made it possible. They solved the significant challenges of building what was then the world's longest span suspension bridge. Together, they mastered the equations to calculate the forces to accommodate.

Ellis created the design of the bridge at his home office in Chicago. He worked in tandem with Moissief, whom he had recruited, and communicated with him in New York by telegram. Ellis labored on the design in the initial critical three years. Strauss, not understanding the delays caused by the complexity of the work, grew impatient, and dismissed Ellis. Despite his essential contributions, he was not acknowledged at the opening of the bridge, and indeed, he never even saw the finished bridge.

Consulting architect, Irving Morrow, was responsible for the elegant small features (such as street lamps, railings) and the stylized Art Deco vertical fluting of the towers. It was he who insisted on the now-famous orange-red hue for the paint.

Finally, at the bridge opening, Strauss had silenced all the critics that had said it could not be done. He referred to those “sneers”in his poem, and hinted at the stress and emotions experienced to overcome the political and financial obstacles:


Introductory text by Webmaster. The poem can be found here.