Air Force Chief of Staff: Doctor, what do you think of our new creation, the ‚Ä¶ Corporation?
von K√°rm√°n: Why, General, I think that corporation has already had an effect on the whole industry.
Air Force Chief of Staff: I‚Äôm delighted. What effect is that?
von K√°rm√°n: Why, they‚Äôve upset the salary schedule of the whole industry.

As quoted by William R. Sears in 'Some Recollections of Theodore von K√°rm√°n', Address to the Symposium in Memory of Theodore von K√°rm√°n, Society for Industrial and Applied Mathematics, National Meeting (13-14 May 1964), Washington, D.C. Printed in Journal of the Society for Industrial and Applied Mathematics (Mar 1965), 13>, No. 1, 181. These are likely not verbatim words of Karman, but as recollected by Sears, giving an example of von K√°rm√°n‚Äôs willingness to speak truth to power.

After a duration of a thousand years, the power of astrology broke down when, with Copernicus, Kepler, and Galileo, the progress of astronomy overthrew the false hypothesis upon which the entire structure rested, namely the geocentric system of the universe. The fact that the earth revolves in space intervened to upset the complicated play of planetary influences, and the silent stars, related to the unfathomable depths of the sky, no longer made their prophetic voices audible to mankind. Celestial mechanics and spectrum analysis finally robbed them of their mysterious prestige.

Art is meant to upset people, science reassures them.

At this point, however, I have no intention whatever of criticizing the false teachings of Galen, who is easily first among the professors of dissection, for I certainly do not wish to start off by gaining a reputation for impiety toward him, the author of all good things, or by seeming insubordinate to his authority. For I am well aware how upset the practitioners (unlike the followers of Aristotle) invariably become nowadays, when they discover in the course of a single dissection that Galen has departed on two hundred or more occasions from the true description of the harmony, function, and action of the human parts, and how grimly they examine the dissected portions as they strive with all the zeal at their command to defend him. Yet even they, drawn by their love of truth, are gradually calming down and placing more faith in their own not ineffective eyes and reason than in Galen‚Äôs writings.

From De Humani Corporis Fabrica Libri Septem: (1543), Book I, iv, as translated by William Frank Richardson, in On The Fabric of the Human Body: Book I: The Bones and Cartilages (1998), Preface, liv.

Einstein, my upset stomach hates your theory [of General Relativity]‚Äîit almost hates you yourself! How am I to provide for my students? What am I to answer to the philosophers?!!

Error held as truth has much the effect of truth. In politics and religion this fact upsets many confident predictions.

Get a shot off fast. This upsets him long enough to let you make your second shot perfect.

Historical theories are, after all, intellectual apple carts. They are quite likely to be upset. Nor should it be forgotten that they tend to attract, when they gain ascendancy, a fair number of apple-polishers

I always feel like our descendants‚Äîthey're going to be upset with us for wrecking the planet anyway‚Äîbut they're really going to be mad that we didn't even bother to take a good picture. [On the importance of thorough research of even a little ant species.]

I have no doubt that certain learned men, now that the novelty of the hypotheses in this work has been widely reported‚Äîfor it establishes that the Earth moves, and indeed that the Sun is motionless in the middle of the universe‚Äîare extremely shocked, and think that the scholarly disciplines, rightly established once and for all, should not be upset. But if they are willing to judge the matter thoroughly, they will find that the author of this work has committed nothing which deserves censure. For it is proper for an astronomer to establish a record of the motions of the heavens with diligent and skilful observations, and then to think out and construct laws for them, or rather hypotheses, whatever their nature may be, since the true laws cannot be reached by the use of reason; and from those assumptions the motions can be correctly calculated, both for the future and for the past. Our author has shown himself outstandingly skilful in both these respects. Nor is it necessary that these hypotheses should be true, nor indeed even probable, but it is sufficient if they merely produce calculations which agree with the observations. ‚Ä¶ For it is clear enough that this subject is completely and simply ignorant of the laws which produce apparently irregular motions. And if it does work out any laws‚Äîas certainly it does work out very many‚Äîit does not do so in any way with the aim of persuading anyone that they are valid, but only to provide a correct basis for calculation. Since different hypotheses are sometimes available to explain one and the same motion (for instance eccentricity or an epicycle for the motion of the Sun) an astronomer will prefer to seize on the one which is easiest to grasp; a philosopher will perhaps look more for probability; but neither will grasp or convey anything certain, unless it has been divinely revealed to him. Let us therefore allow these new hypotheses also to become known beside the older, which are no more probable, especially since they are remarkable and easy; and let them bring with them the vast treasury of highly learned observations. And let no one expect from astronomy, as far as hypotheses are concerned, anything certain, since it cannot produce any such thing, in case if he seizes on things constructed for another other purpose as true, he departs from this discipline more foolish than he came to it.

Although this preface would have been assumed by contemporary readers to be written by Copernicus, it was unsigned. It is now believed to have been written and added at press time by Andreas Osiander (who was then overseeing the printing of the book). It suggests the earth‚Äôs motion as described was merely a mathematical device, and not to be taken as absolute reality. Text as given in 'To the Reader on the Hypotheses in this Work', Copernicus: On the Revolutions of the Heavenly Spheres (1543), translated by ‎Alistair Matheson Duncan (1976), 22-3. By adding this preface, Osiander wished to stave off criticism by theologians. See also the Andreas Osiander Quotes page of this website.

No. I have been teaching it all my life, and I do not want to have my ideas upset.

Reply when James Clerk Maxwell‚Äôs asked if he would like to see an experimental demonstration of conical refraction. As given in James G. Crowther, The Cavendish Laboratory, 1874-1974 (1974), 9.

Our emphasis on science has resulted in an alarming rise in world populations, the demand and ever-increasing emphasis of science to improve their standards and maintain their vigor. I have been forced to the conclusion that an over-emphasis of science weakens character and upsets life's essential balance. 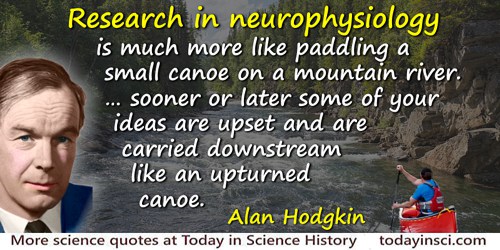 Research in neurophysiology is much more like paddling a small canoe on a mountain river. The river which is fed by many distant springs carries you along all right though often in a peculiar direction. You have to paddle quite hard to keep afloat. And sooner or later some of your ideas are upset and are carried downstream like an upturned canoe.

The apex of mathematical achievement occurs when two or more fields which were thought to be entirely unrelated turn out to be closely intertwined. Mathematicians have never decided whether they should feel excited or upset by such events.

The notion that the ‚Äúbalance of nature‚Äù is delicately poised and easily upset is nonsense. Nature is extraordinarily tough and resilient, interlaced with checks and balances, with an astonishing capacity for recovering from disturbances in equilibrium. The formula for survival is not power; it is symbiosis.

The politician ‚Ä¶ is sometimes tempted to encroach on the normal territory of the scientific estate. Sometimes he interferes directly with the scientist‚Äôs pursuit of basic science; but he is more likely to interfere when the scientist proposes to publish findings that upset the established political or economic order, or when he joins with the engineering or medical profession in proposing to translate the findings of science into new policies. ‚Ä¶ Who decides when the apparent consensus of scientific opinion on the relation of cigarettes to lung cancer is great enough to justify governmental regulatory action, and of what kind? In such issues the problem is less often whether politics will presume to dictate to science than it is how much politics is to be influenced by the new findings of science.

To the average mathematician who merely wants to know his work is securely based, the most appealing choice is to avoid difficulties by means of Hilbert's program. Here one regards mathematics as a formal game and one is only concerned with the question of consistency ... . The Realist position is probably the one which most mathematicians would prefer to take. It is not until he becomes aware of some of the difficulties in set theory that he would even begin to question it. If these difficulties particularly upset him, he will rush to the shelter of Formalism, while his normal position will be somewhere between the two, trying to enjoy the best of two worlds.