But how shall we this union well expresse?
Naught tyes the soule: her subtiltie is such
She moves the bodie, which she doth possesse.
Yet no part toucheth, but by Vertue's touch.
Then dwels she not therein as in a tent;
Nor as a pilot in his Ship doth sit;
Nor as the spider in his web is pent;
Nor as the Waxe retaines the print in it;
Nor as a Vessell water doth containe;
Nor as one Liquor in another shed;
Nor as the heate dath in the fire remaine;
Nor as a voice throughout the ayre is spred;
But as the faire and cheerfull morning light,
Doth here, and there, her silver beames impart,
And in an instant doth her selfe unite
To the transparent Aire, in all, and part:
Still resting whole, when blowes the Aire devide;
Abiding pure, when th' Aire is most corrupted;
Throughout the Aire her beames dispersing wide,
And when the Aire is tost, not interrupted:
So doth the piercing Soule the body fill;
Being all in all, and all in part diffus'd;
Indivisible, incorruptible still,
Not forc't, encountred, troubled or confus'd.
And as the Sunne above the light doth bring,
Tough we behold it in the Aire below;
So from th'eternall light the Soule doth spring,
Though in the Bodie she her powers do show. 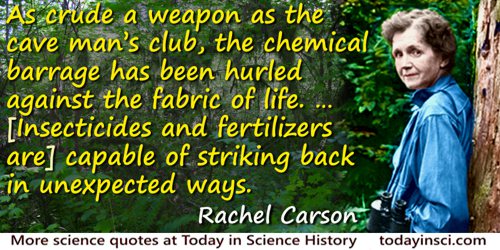 As crude a weapon as the cave mans club, the chemical barrage has been hurled against the fabric of lifea fabric on the one hand delicate and destructible, on the other miraculously tough and resilient, and capable of striking back in unexpected ways. [On the effect of chemical insecticides and fertilizers.]

As I have already mentioned, wherever cells are formed, this tough fluid precedes the first solid structures that indicate the presence of future cells. Moreover, we must assume that this substance furnishes the material for the formation of the nucleus and of the primitive sac, not only because these structures are closely apposed to it, but also because,they react to iodine in the same way. We must assume also that the organization of this substance is the process that inaugurates the formation of new cells. It therefore seems justifiable for me to propose a name that refers to its physiological function: I propose the word protoplasma.

Being a fish out of water is tough, but thats how you evolve. I think thats scientifically accurateI dont know, I had a liberal arts education.

Find out all you have to buck, and then breed 'em tough.
[About breeding hardier strains of disease-resistant wheat.]

Its a common occurrence in a forefront area of science, where the questions are tough and the measurements extremely difficult. You have different groups using different methods and they get different answers. You see it all the time, and the public rarely notices. But when it happens to be in cosmology, it makes headlines.

Religions are tough. Either they make no contentions which are subject to disproof or they quickly redesign doctrine after disproof.  near the core of the religious experience is something remarkably resistant to rational inquiry.

Surely the mitochondrion that first entered another cell was not thinking about the future benefits of cooperation and integration; it was merely trying to make its own living in a tough Darwinian world

The history of philosophy is to a great extent that of a certain clash of human temperaments I will write these traits down in two columns. I think you will practically recognize the two types of mental make-up that I mean if I head the columns by the titles tender-minded and tough-minded respectively.
THE TENDER-MINDED. Rationalistic (going by principles), Intellectualistic, Idealistic, Optimistic, Religious, Free-willist, Monistic, Dogmatical.
THE TOUGH-MINDED. Empiricist (going by facts), Sensationalistic, Materialistic, Pessimistic, Irreligious, Fatalistic, Pluralistic, Sceptical.

'The Present Dilemma in Philosophy', in Pragmatism: A New Way for Some Old Ways of Thinking, Popular Lectures on Philosophy (1907), 6, 12.

The National Health Service is rotting before our eyes, with a lack of political will to make the tough choices for a first-class service for an ever more demanding population.

The notion that the balance of nature is delicately poised and easily upset is nonsense. Nature is extraordinarily tough and resilient, interlaced with checks and balances, with an astonishing capacity for recovering from disturbances in equilibrium. The formula for survival is not power; it is symbiosis.

The vigorous branching of lifes tree, and not the accumulating valor of mythical marches to progress, lies behind the persistence and expansion of organic diversity in our tough and constantly stressful world. And if we do not grasp the fundamental nature of branching as the key to lifes passage across the geological stage, we will never understand evolution aright.

When its too easy to get money, then you get a lot of noise mixed in with the real innovation and entrepreneurship. Tough times bring out the best parts of Silicon Valley

As quoted by Jessica Guynn, reporting on a media roundtable at a conference on Googles campus, in 'Googles Schmidt, Page and Brin hold court at Zeitgeist', Los Angeles Times (17 Sep 2008). On latimesblogs.latimes.com webpage.

When we accept tough jobs as a challenge and wade into them with joy and enthusiasm, miracles can happen.

[The toughest part of being in charge is] killing ideas that are great but poorly timed. And delivering tough feedback thats difficult to hear but that I know will help peopleand the teamin the long term.