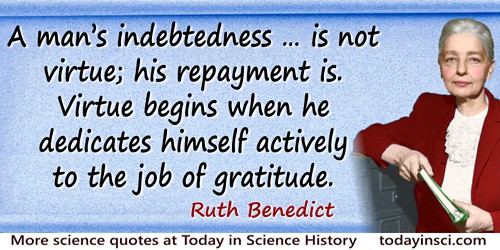 A manâ€™s indebtedness â€¦ is not virtue; his repayment is. Virtue begins when he dedicates himself actively to the job of gratitude.

But here it may be objected, that the present Earth looks like a heap of Rubbish and Ruines; And that there are no greater examples of confusion in Nature than Mountains singly or jointly considered; and that there appear not the least footsteps of any Art or Counsel either in the Figure and Shape, or Order and Disposition of Mountains and Rocks. Wherefore it is not likely they came so out of God's hands ... To which I answer, That the present face of the Earth with all its Mountains and Hills, its Promontaries and Rocks, as rude and deformed as they appear, seems to me a very beautiful and pleasant object, and with all the variety of Hills, and Valleys, and Inequalities far more grateful to behold, than a perfectly level Countrey without any rising or protuberancy, to terminate the sight: As anyone that hath but seen the Isle of Ely, or any the like Countrey must need acknowledge.

Miscellaneous Discourses Concerning the Dissolution and Changes of the World (1692), 165-6.

I am of the African race, and in the colour which is natural to them of the deepest dye; and it is under a sense of the most profound gratitude to the Supreme Ruler of the Universe.

I have a boundless admiration for the solitary genius which enabled [Hermann Oberth] to bring into focus all of the essential elements of a gigantic concept, together with the human greatness which allowed him, in shy reserve, to bear with equanimity the â€ścrucify himsâ€ť as well as the â€śhosannasâ€ť of public opinion. I myself owe him a debt of gratitude not only for being the guiding light of my life, but also for my first contact with the theoretical and practical aspects of rocket technology and space travel.

I have had a fairly long life, above all a very happy one, and I think that I shall be remembered with some regrets and perhaps leave some reputation behind me. What more could I ask? The events in which I am involved will probably save me from the troubles of old age. I shall die in full possession of my faculties, and that is another advantage that I should count among those that I have enjoyed. If I have any distressing thoughts, it is of not having done more for my family; to be unable to give either to them or to you any token of my affection and my gratitude is to be poor indeed.

It is impossible for us adequately to conceive the boldness of the measure which aimed at universal education through the establishment of free schools. ... it had no precedent in the world's history ... But time has ratified its soundness. Two centuries proclaim it to be as wise as it was courageous, as beneficient as it was disinterested. ... The establishment of free schools was one of those grand mental and moral experiments whose effects could not be developed and made manifest in a single generation. ... The sincerity of our gratitude must be tested by our efforts to perpetuate and improve what they established. The gratitude of the lips only is an unholy offering.

One looks back with appreciation to the brilliant teachers, but with gratitude to those who touched our human feelings. The curriculum is so much necessary raw material, but warmth is the vital element for the growing plant and for the soul of the child.

The bell ringing for church, we went thither immediately, and with hearts full of gratitude, returned sincere thanks to God for the mercies we had received: were I a Roman Catholic, perhaps I should on this occasion vow to build a chapel to some saint, but as I am not, if I were to vow at all, it should be to build a light-house. [Upon narrowly missing a shipwreck on the Scilly rocks.]
[Frequently seen summarized as, though not Franklin's own wording: Lighthouses are more helpful than churches.

The respect which in all ages and countries has ever been paid to inventors seems, indeed, to rest on something more profound than mere gratitude for the benefits which they have been the means of conferring on mankind; and to imply, if it does not express, a consciousness that by the grand and original conceptions of their minds they approach somewhat more nearly than their fellows to the qualities and pre-eminence of a higher order of being.

The Origin and Progress of the Mechanical Inventions of James Watt (1854), Vol.1, 2.

To be saved from the jaws of a wolf by a hungry bear is no great cause for gratitude.

Aphorism as given by the fictional character Dezhnev Senior, in Fantastic Voyage II: Destination Brain (1987), 227.

We owe our lives to the sun... How is it, then, that we feel no gratitude?

What is one to think of a man so asinine that he looks for gratitude in this world, or so puerilely egotistical that he enjoys it when found?