As soon as the art of Flying is Found out, some of their Nation will make one of the first Colonies, that shall Transplant into that other World.

At the origin, the [space travel] pioneers of the greatest adventure of all times were motivated by the drive to explore, by the pure spirit of conquest, by the lofty desire to open up new fields to human genius. â€¦ From their exceptional journeys, they all came back with the revelation of beauty. Beauty of the black sky, beauty and variety of our planet, beauty of the Earth seen from the Moon, girdled by a scintillating belt of equatorial thunderstorms. They all emphasize that our planet is one, that borderlines are artificial, that humankind is one single community on board spaceship Earth. They all insist that this fragile gem is at our mercy and that we must all endeavor to protect it.

Faced with the admitted difficulty of managing the creative process, we are doubling our efforts to do so. Is this because science has failed to deliver, having given us nothing more than nuclear power, penicillin, space travel, genetic engineering, transistors, and superconductors? Or is it because governments everywhere regard as a reproach activities they cannot advantageously control? They felt that way about the marketplace for goods, but trillions of wasted dollars later, they have come to recognize the efficiency of this self-regulating system. Not so, however, with the marketplace for ideas.

I believe as a matter of faith that the extension of space travel to the limits of the solar system will probably be accomplished in several decades, perhaps before the end of the century. Pluto is 4000 million miles from the sun. The required minimum launching velocity is about 10 miles per second and the transit time is 46 years. Thus we would have to make the velocity considerably higher to make the trip interesting to man. Travel to the stars is dependent on radically new discoveries in science and technology. The nearest star is 25 million million miles way and requires a travel time of more than four years at the speed of light. Prof. Dr. Ing. E. Sanger has speculated that velocities comparable with the speed of light might be attained in the next century, but such extrapolation of current technology is probably not very reliable.

I have a boundless admiration for the solitary genius which enabled [Hermann Oberth] to bring into focus all of the essential elements of a gigantic concept, together with the human greatness which allowed him, in shy reserve, to bear with equanimity the â€ścrucify himsâ€ť as well as the â€śhosannasâ€ť of public opinion. I myself owe him a debt of gratitude not only for being the guiding light of my life, but also for my first contact with the theoretical and practical aspects of rocket technology and space travel.

I think the rocket will end up doing for space travel what the balloon did for air travel: it got us there, but soon was superseded by something better.

I think we need someone in a responsible political position to have the courage to say, â€śLetâ€™s terminate human spaceflight.â€ť

In a dispassionate comparison of the relative values of human and robotic spaceflight, the only surviving motivation for continuing human spaceflight is the ideology of adventure. But only a tiny number of Earthâ€™s six billion inhabitants are direct participants. For the rest of us, the adventure is vicarious and akin to that of watching a science fiction movie.

In 'Is Human Spaceflight Obsolete?', Issues in Science and Technology (Summer 2004). [Note: published one year after the loss of seven lives in the Space Shuttle Columbia disaster. â€”Webmaster]

In the infancy of physical science, it was hoped that some discovery might be made that would enable us to emancipate ourselves from the bondage of gravity, and, at least, pay a visit to our neighbour the moon. The poor attempts of the aeronaut have shewn the hopelessness of the enterprise. The success of his achievement depends on the buoyant power of the atmosphere, but the atmosphere extends only a few miles above the earth, and its action cannot reach beyond its own limits. The only machine, independent of the atmosphere, we can conceive of, would be one on the principle of the rocket. The rocket rises in the air, not from the resistance offered by the atmosphere to its fiery stream, but from the internal reaction. The velocity would, indeed, be greater in a vacuum than in the atmosphere, and could we dispense with the comfort of breathing air, we might, with such a machine, transcend the boundaries of our globe, and visit other orbs.

It [space travel] will free man from his remaining chains, the chains of gravity which still tie him to this planet. It will open to him the gates of heaven.

Iâ€™m one of the most durable and fervent advocates of space exploration, but my take is that we could do it robotically at far less cost and far greater quantity and quality of results. 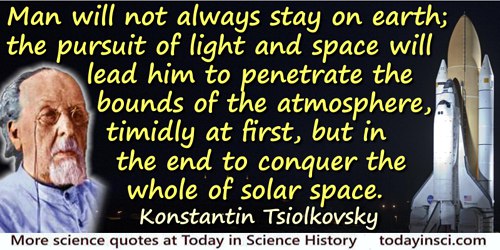 Man will not always stay on earth; the pursuit of light and space will lead him to penetrate the bounds of the atmosphere, timidly at first, but in the end to conquer the whole of solar space.

Epitaph he wrote for himself, engraved in bronze letters on the tall grey stone obelisk raised over his grave. As translated by Kenneth Syers and given in the English edition, Beyond the Planet Earth (1960) of K. Tsiolkovskyâ€™s original Russian book (1920). Also seen translated as, â€śMankind will not remain on the earth forever, but, in search of light and space, will at first timidly penetrate beyond the limits of the atmosphere and then finally conquer the spaces of the solar system.â€ť

My position is that it is high time for a calm debate on more fundamental questions. Does human spaceflight continue to serve a compelling cultural purpose and/or our national interest?

Space travel is at the frontier of my profession. It is going to be accomplished and I want to be in on it. There is also an element of simple duty involved. I am convinced that I have something to give this project.

As Astronomer Royal, Britain, in 1957, two weeks before the launch of Sputnik.

In 1956, one year before Sputnik. As quoted by Charles Hard Townes in essay, 'Unpredictability in Science and Technology', collected in Martin Moskovits (ed.), Science and Society, the John C. Polanyi Nobel Laureates Lectures (1995), 34.

The most important thing we can do is inspire young minds and to advance the kind of science, math and technology education that will help youngsters take us to the next phase of space travel.

The world we know at present is in no fit state to take over the dreariest little meteor ... If we have the courage and patience, the energy and skill, to take us voyaging to other planets, then let us use some of these to tidy up and civilize this earth. One world at a time, please.

Column in the London News Chronicle as quoted in article, 'Notions in Motion,' Time (24 Nov 1952).

Throughout history, engineers have served their neighbours, their towns and their countries by making tools, machines and countless other things that improve every aspect of life. From information technology to medical science and mining, from building roads to space travel, engineers are working to make a difference to our standard of living, and with it our health, wealth and happiness. At its heart, engineering is about using science to find creative, practical solutions. It is a noble profession.