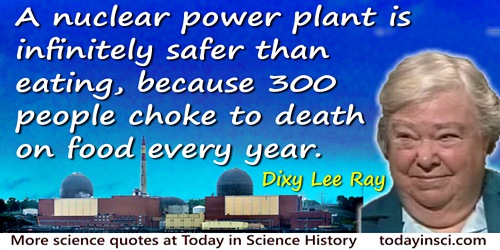 Boss: Dilbert, You have been chosen to design the worlds safest nuclear power plant.
Dilbert: This is the great assignment that any engineer could hope for. I'm flattered by the trust you have in me.
Boss: By safe I mean not near my house.

A nuclear power plant is infinitely safer than eating, because 300 people choke to death on food every year. (1977)

Adam, the first man, didnt know anything about the nucleus but Dr. George Gamow, visiting professor from George Washington University, pretends he does. He says for example that the nucleus is 0.00000000000003 feet in diameter. Nobody believes it, but that doesn't make any difference to him.
He also says that the nuclear energy contained in a pound of lithium is enough to run the United States Navy for a period of three years. But to get this energy you would have to heat a mixture of lithium and hydrogen up to 50,000,000 degrees Fahrenheit. If one has a little stove of this temperature installed at Stanford, it would burn everything alive within a radius of 10,000 miles and broil all the fish in the Pacific Ocean.
If you could go as fast as nuclear particles generally do, it wouldnt take you more than one ten-thousandth of a second to go to Miller's where you could meet Gamow and get more details.

Dr. Bhabha was a visionary. He had excellent command over electronics, physics and he saw the dream of India being a nuclear power.  He was a perfectionist and would leave no point of suspicion while working on any project. He was an inspiration.

Interview in newsletter of the Raja Ramanna Centre for Advanced Technology (Oct 2001), online.

Faced with the admitted difficulty of managing the creative process, we are doubling our efforts to do so. Is this because science has failed to deliver, having given us nothing more than nuclear power, penicillin, space travel, genetic engineering, transistors, and superconductors? Or is it because governments everywhere regard as a reproach activities they cannot advantageously control? They felt that way about the marketplace for goods, but trillions of wasted dollars later, they have come to recognize the efficiency of this self-regulating system. Not so, however, with the marketplace for ideas.

On May 7, a few weeks after the accident at Three-Mile Island, I was in Washington. I was there to refute some of that propaganda that Ralph Nader, Jane Fonda and their kind are spewing to the news media in their attempt to frighten people away from nuclear power. I am 71 years old, and I was working 20 hours a day. The strain was too much. The next day, I suffered a heart attack. You might say that I was the only one whose health was affected by that reactor near Harrisburg. No, that would be wrong. It was not the reactor. It was Jane Fonda. Reactors are not dangerous.

From statement, published as a two-page advertisement, 'I Was the Only Victim of Three-Mile Island', placed by Dresser Industries in The Wall Street Journal (31 Jul 1979), U.S. Representative Larry McDonald entered the entire content of the ad, as Extensions of Remarks, into the Congressional Record: Proceedings and Debates of the Congress (18 Dec 1979), 36876. [Note: The Three Mile Island accident happened on 28 Mar 1979. Webmaster]

That a shutdown of existing reactors would be catastrophic I believe is self-evident. It is not only the energy that we would lose, it is the $100 billion investment whose write-off would cause a violent shock to our financial institutions.

This new power, which has proved itself to be such a terrifying weapon of destruction, is harnessed for the first time for the common good of our community. [Upon opening Calder Hall nuclear power station in 1956.]

Those who came before us made certain that this country rode the first waves of the industrial revolution, the first waves of modern invention, and the first wave of nuclear power, and this generation does not intend to founder in the backwash of the coming age of space. We mean to be a part of itwe mean to lead it.

We are faced today with a social decision resulting from our progress in molecular genetics at least equal to, and probably greater than, that required of us twenty years ago with the maturity of nuclear power.

We ought to be using nuclear power. Its a renewable source of energy.

Remarks at the Associated Builders and Contractors National Legislative Conference (8 Jun 2005). In 41 WCPD 956, 'Administration of George W. Bush', 959. Note that at present, nuclear power depends on radioactive uranium, the supply of which on Earth is limited, and not renewable. There will be no more in this part of the universe until the next supernova.