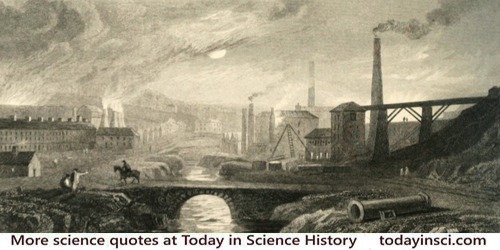 In the main, Bacon prophesied the direction of subsequent progress. But he anticipated the advance. He did not see that the new science was for a long time to be worked in the interest of old ends of human exploitation. He thought that it would rapidly give man new ends. Instead, it put at the disposal of a class the means to secure their old ends of aggrandizement at the expense of another class. The industrial revolution followed, as he foresaw, upon a revolution in scientific method. But it is taking the revolution many centuries to produce a new mind.

James Watt patented his steam engine on the eve of the American Revolution, consummating a relationship between coal and the new Promethean spirit of the age, and humanity made its first tentative steps into an industrial way of life that would, over the next two centuries, forever change the world.

In The Hydrogen Economy: The Creation of the Worldwide Energy Web and the Redistribution of Power on Earth (2002), 2.

Since [World War I] we have seen the atomic age, the computer age, the space age, and the bio-engineering age, each as epochal as the Bronze Age, the Iron Age, the Renaissance and the Industrial Revolution. And all these have occurred in one generation. Man has stood on the moon and looked back on the earth, that small planet now reduced to a neighbourhood. But our material achievements have exceeded the managerial capacities of our human minds and institutions.

Sooner or later in every talk, [David] Brower describes the creation of the world. He invites his listeners to consider the six days of Genesis as a figure of speech for what has in fact been 4 billion years. On this scale, one day equals something like six hundred and sixty-six million years, and thus, all day Monday and until Tuesday noon, creation was busy getting the world going. Life began Tuesday noon, and the beautiful organic wholeness of it developed over the next four days. At 4 p.m. Saturday, the big reptiles came on. At three minutes before midnight on the last day, man appeared. At one-fourth of a second before midnight Christ arrived. At one-fortieth of a second before midnight, the Industrial Revolution began. We are surrounded with people who think that what we have been doing for that one-fortieth of a second can go on indefinitely. They are considered normal, but they are stark. raving mad.

The development of science has produced an industrial revolution which has brought different peoples in such close contact with one another through colonization and commerce that no matter how some nations may still look down upon others, no country can harbor the illusion that its career is decided wholly within itself.

In Democracy and Education: An Introduction to the Philosophy of Education (1916), 337.

The Industrial Revolution as a whole was not designed. It took shape gradually as industrialists and engineers figured out how to make things. The result is that we put billions of pounds of toxic materials in the air, water and soil every year and generate gigantic amounts of waste. If our goal is to destroy the worldto produce global warming and toxicity and endocrine disruptionwe're doing great.

Those who came before us made certain that this country rode the first waves of the industrial revolution, the first waves of modern invention, and the first wave of nuclear power, and this generation does not intend to founder in the backwash of the coming age of space. We mean to be a part of itwe mean to lead it.