...I may perhaps venture a short word on the question much discussed in certain quarters, whether in the work of excavation it is a good thing to have cooperation between men and women ... Of a mixed dig ... I have seen something, and it is an experiment that I would be reluctant to try again. I would grant if need be that women are admirable fitted for the work, yet I would uphold that they should undertake it by themselves ... the work of an excavator on the dig and off it lays on those who share it a bond of closer daily intercourse than is conceivable ... between men and women, except in chance cases, I do not believe that such close and unavoidable companionship can ever be other than a source of irritation; at any rate, I believe that however it may affect women, the ordinary male at least cannot stand it ... A minor ... objection lies in one particular form of contraint ... moments will occur on the best regulated dig when you want to say just what you think without translation, which before the ladies, whatever their feelings about it, cannot be done.

A small cabin stands in the Glacier Peak Wilderness, about a hundred yards off a trail that crosses the Cascade Range. In midsummer, the cabin looked strange in the forest. It was only twelve feet square, but it rose fully two stories and then had a high and steeply peaked roof. From the ridge of the roof, moreover, a ten-foot pole stuck straight up. Tied to the top of the pole was a shovel. To hikers shedding their backpacks at the door of the cabin on a cold summer eveningas the five of us didit was somewhat unnerving to look up and think of people walking around in snow perhaps thirty-five feet above, hunting for that shovel, then digging their way down to the threshold.

All creation is a mine, and every man a miner.
The whole earth, and all within it, upon it, and round about it, including himself  are the infinitely various leads from which, man, from the first, was to dig out his destiny.

American archaeology has always attracted lots of amateurs ... They were digging up Indian pottery all over the place.

Boundaries which mark off one field of science from another are purely artificial, are set up only for temporary convenience. Let chemists and physicists dig deep enough, and they reach common ground.

But if you have seen the soil of India with your own eyes and meditate on its nature - if you consider the rounded stones found in the earth however deeply you dig, stones that are huge near the mountains and where the rivers have a violent current; stones that are of smaller size at greater distance from the mountains, and where the streams flow more slowly; stones that appear pulverised in the shape of sand where the streams begin to stagnate near their mouths and near the sea - if you consider all this, you could scarcely help thinking that India has once been a sea which by degrees has been filled up by the alluvium of the streams.

During the time of the Deluge, whilst the Water was out upon, and covered the Terrestrial Globe,  all Fossils whatever that had before obtained any Solidity, were totally dissolved, and their constituent Corpuscles all disjoyned, their Cohesion perfectly ceasing  [A]nd, to be short, all Bodies whatsoever that were either upon the Earth, or that constituted the Mass of it, if not quite down to the Abyss, yet at least to the greatest depth we ever dig: I say all these were assumed up promiscuously into the Water, and sustained in it, in such a manner that the Water, and Bodies in it, together made up one common confused Mass. That at length all the Mass that was thus borne up in the Water, was again precipitated and subsided towards the bottom. That this subsidence happened generally, and as near as possibly could be expected in so great a Confusion, according to the laws of Gravity.

Ever since we arrived on this planet as a species, weve cut them down, dug them up, burnt them and poisoned them. Today were doing so on a greater scale than ever.

If we make a couple of discoveries here and there we need not believe things will go like this for ever. An acrobat can leap higher than a farm-hand, and one acrobat higher than another, yet the height no man can overleap is still very low. Just as we hit water when we dig in the earth, so we discover the incomprehensible sooner or later.

If  you reward people for behavior thats actually bad  then youre going to encourage that behavior. Today, our [conservation] incentives arent set up well-you can make a lot of money burning fossil fuels, digging up wetlands, pumping fossil water out of aquifers that will take 10,000 years to recharge, overfishing species in international waters that are close to collapse, and so on.

From interview with Mark Tercek, 'Q&A With Ramez Naam: Dialogues on the Environment', Huffington Post (1 Jul 2013).

LOGIC, n. The art of thinking and reasoning in strict accordance with the limitations and incapacities of the human misunderstanding. The basic of logic is the syllogism, consisting of a major and a minor premise and a conclusionthus:
Major Premise: Sixty men can do a piece of work sixty times as quickly as one man.
Minor Premise: One man can dig a post-hole in sixty seconds; therefore
Conclusion: Sixty men can dig a post-hole in one second.
This may be called the syllogism arithmetical, in which, by combining logic and mathematics, we obtain a double certainty and are twice blessed.

Scientists come in two varieties, hedgehogs and foxes. I borrow this terminology from Isaiah Berlin (1953), who borrowed it from the ancient Greek poet Archilochus. Archilochus told us that foxes know many tricks, hedgehogs only one. Foxes are broad, hedgehogs are deep. Foxes are interested in everything and move easily from one problem to another. Hedgehogs are only interested in a few problems that they consider fundamental, and stick with the same problems for years or decades. Most of the great discoveries are made by hedgehogs, most of the little discoveries by foxes. Science needs both hedgehogs and foxes for its healthy growth, hedgehogs to dig deep into the nature of things, foxes to explore the complicated details of our marvelous universe. Albert Einstein and Edwin Hubble were hedgehogs. Charley Townes, who invented the laser, and Enrico Fermi, who built the first nuclear reactor in Chicago, were foxes.

In 'The Future of Biotechnology', A Many-Colored Glass: Reflections on the Place of Life in the Universe (2007), 1.

The archaeologist is digging up, not things, but people. Unless the bits and pieces with which he deals be alive to him, unless he have himself the common touch, he had better seek out other disciplines for his exercise.

The best place to find God is in a garden. You can dig for Him there.

The mortality of those who dig minerals is very great, and women who marry men of this sort marry again and again. According to Agricola, at the mines in the Carpathian mountains, women have been known to marry seven times. 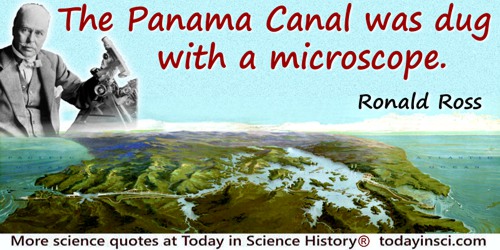 The Panama Canal was dug with a microscope.

Attributed. He wrote I have said elsewhere that the Panama Canal is being dug with a microscope, in his Preface to Malcolm Watson, The Prevention of Malaria in the Federated Malay States (1921), x.

Theres no value in digging shallow wells in a hundred places. Decide on one place and dig deep ... If you leave that to dig another well, all the first effort is wasted and there is no proof you wont hit rock again.