I have no patience with attempts to identify science with measurement, which is but one of its tools, or with any definition of the scientist which would exclude a Darwin, a Pasteur or a Kekulé. The scientist is a practical man and his are practical aims. He does not seek the ultimate but the proximate. He does not speak of the last analysis but rather of the next approximation. His are not those beautiful structures so delicately designed that a single flaw may cause the collapse of the whole. The scientist builds slowly and with a gross but solid kind of masonry. If dissatisfied with any of his work, even if it be near the very foundations, he can replace that part without damage to the remainder. On the whole, he is satisfied with his work, for while science may never be wholly right it certainly is never wholly wrong; and it seems to be improving from decade to decade.

If all mankind were to disappear, the world would regenerate back to the rich state of equilibrium that existed ten thousand years ago. If insects were to vanish, the environment would collapse into chaos.

In Rosemarie Jarski, Words From The Wise (2007), 269. [Contact webmaster if you know the primary print source.]

If we and the rest of the backboned animals were to disappear overnight, the rest of the world would get on pretty well. But if [the invertebrates] were to disappear, the worlds ecosystems would collapse. disappear, the lands ecosystems would collapse. The soil would lose its fertility. Many of the plants would no longer be pollinated. Lots of animals, amphibians, reptiles, birds, mammals would have nothing to eat. And our fields and pastures would be covered with dung and carrion.

If you're overfishing at the top of the food chain, and acidifying the ocean at the bottom, you're creating a squeeze that could conceivably collapse the whole system.

If  you reward people for behavior thats actually bad  then youre going to encourage that behavior. Today, our [conservation] incentives arent set up well-you can make a lot of money burning fossil fuels, digging up wetlands, pumping fossil water out of aquifers that will take 10,000 years to recharge, overfishing species in international waters that are close to collapse, and so on.

From interview with Mark Tercek, 'Q&A With Ramez Naam: Dialogues on the Environment', Huffington Post (1 Jul 2013).

It is both a sad and a happy fact of engineering history that disasters have been powerful instruments of change. Designers learn from failure. Industrial society did not invent grand works of engineering, and it was not the first to know design failure. What it did do was develop powerful techniques for learning from the experience of past disasters. It is extremely rare today for an apartment house in North America, Europe, or Japan to fall down. Ancient Rome had large apartment buildings too, but while its public baths, bridges and aqueducts have lasted for two thousand years, its big residential blocks collapsed with appalling regularity. Not one is left in modern Rome, even as ruin.

In Why Things Bite Back: Technology and the Revenge of Unintended Consequences (1997), 23.

It is well known that theoretical physicists cannot handle experimental equipment; it breaks whenever they touch it. Pauli was such a good theoretical physicist that something usually broke in the lab whenever he merely stepped across the threshold. A mysterious event that did not seem at first to be connected with Pauli's presence once occurred in Professor J. Franck's laboratory in Göttingen. Early one afternoon, without apparent cause, a complicated apparatus for the study of atomic phenomena collapsed. Franck wrote humorously about this to Pauli at his Zürich address and, after some delay, received an answer in an envelope with a Danish stamp. Pauli wrote that he had gone to visit Bohr and at the time of the mishap in Franck's laboratory his train was stopped for a few minutes at the Göttingen railroad station. You may believe this anecdote or not, but there are many other observations concerning the reality of the Pauli Effect!

From Thirty Years That Shook Physics: The Story of Quantum Theory (1966), 64. Note the so-called Pauli Effect is merely anecdotal to provide humor about supposed parapsychology phenomena in coincidences involving Pauli; it should not be confused with scientifically significant Pauli Exclusion Principle.

Maxwell's equations originally consisted of eight equations. These equations are not beautiful. They do not possess much symmetry. In their original form, they are ugly. However, when rewritten using time as the fourth dimension, this rather awkward set of eight equations collapses into a single tensor equation. This is what a physicist calls beauty.

In 'Quantum Heresy', Hyperspace: A Scientific Odyssey Through Parallel Universes, Time Warps, and the Tenth Dimension (1995), 130. Note: For two beauty criteria, unifying symmetry and economy of expression, see quote on this page beginning When physicists

Most loss of life and property has been due to the collapse of antiquated and unsafe structures, mostly of brick and other masonry. ... There is progress of California toward building new construction according to earthquake-resistant design. We would have less reason to ask for earthquake prediction if this was universal.

From interview with Henry Spall, as in an abridged version of Earthquake Information Bulletin (Jan-Feb 1980), 12, No. 1, that was on the USGS website.

The dog writhing in the gutter, its back broken by a passing car, knows what it is to be alive. So too with the aged elk of the far north woods, slowly dying in the bitter cold of winter. The asphalt upon which the dog lies knows no pain. The snow upon which the elk has collapsed knows not the cold. But living beings do.  Are you conscious? Then you can feel more pain.  Perhaps we even suffer more than the dumb animals.

The great artifice of regarding small deviations from the truth as being the truth itself is at the same time the foundation of wit, where the whole thing would often collapse if we were to regard these deviations in a spirit of philosophical rigor.

Aphorism from Georg Christoph Lichtenberg and R.J. Hollingdale (trans.) 'Notebook A: 1765-1770', The Waste Books (1990), 4. Also seen translated as, The great trick of regarding small departures from the truth as the truth itselfon which is founded the entire integral calculusis also the basis of our witty speculations, where the whole thing would often collapse if we considered the departures with philosophical rigour, for example, as quoted in FractalVision: Put Fractals to Work For You (1992), 5, citing Aphorisms: 1764-1799.

The land! That is where our roots are. There is the basis of our physical life. The farther we get away from the land, the greater our insecurity. From the land comes everything that supports life, everything we use for the service of physical life. The land has not collapsed or shrunk in either extent or productivity. It is there waiting to honor all the labor we are willing to invest in it, and able to tide us across any dislocation of economic conditions. 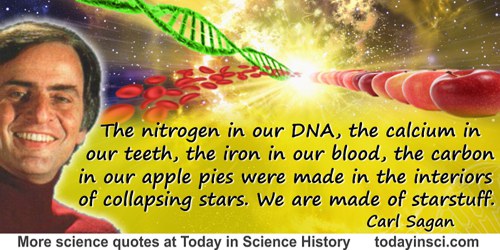 The nitrogen in our DNA, the calcium in our teeth, the iron in our blood, the carbon in our apple pies were made in the interiors of collapsing stars. We are made of starstuff.

The ocean is like a checking account where everybody withdraws but nobody makes a deposit. This is what's happening because of overfishing. Many fisheries have collapsed, and 90 percent of the large fish, sharks and tuna and cod, are gone.

From interview with Terry Waghorn, 'Can We Eat Our Fish and Protect Them Too?', Forbes (21 Feb 2012)

Well-established theories collapse under the weight of new facts and observations which cannot be explained, and then accumulate to the point where the once useful theory is clearly obsolete.
[Using Thomas S. Kuhn's theories to frame his argument about the relationship beween science and technology: as new facts continue to accumulate, a new, more accurate paradigm must replace the old one.]

When ever we turn in these days of iron, steam and electricity we find that Mathematics has been the pioneer. Were its back bone removed, our material civilization would inevitably collapse. Modern thought and belief would have been altogether different, had Mathematics not made the various sciences exact.

The Teaching of Mathematics in the Elementary and the Secondary School (1907), 13.