Almost daily we shudder as prophets of doom announce the impending end of civilization and universe. We are being asphyxiated, they say, by the smoke of the industry; we are suffocating in the ever growing mountain of rubbish. Every new project depicts its measureable effects and is denounced by protesters screaming about catastrophe, the upsetting of the land, the assault on nature. If we accepted this new mythology we would have to stop pushing roads through the forest, harnessing rivers to produce the electricity, breaking grounds to extract metals, enriching the soil with chemicals, killing insects, combating viruses  But progressbasically, an effort to organise a corner of land and make it more favourable for human lifecannot be baited. Without the science of pomiculture, for example, trees will bear fruits that are small, bitter, hard, indigestible, and sour. Progress is desirable.

An empty head is not really empty; it is stuffed with rubbish. Hence the difficulty of forcing anything into an empty head.

But here it may be objected, that the present Earth looks like a heap of Rubbish and Ruines; And that there are no greater examples of confusion in Nature than Mountains singly or jointly considered; and that there appear not the least footsteps of any Art or Counsel either in the Figure and Shape, or Order and Disposition of Mountains and Rocks. Wherefore it is not likely they came so out of God's hands ... To which I answer, That the present face of the Earth with all its Mountains and Hills, its Promontaries and Rocks, as rude and deformed as they appear, seems to me a very beautiful and pleasant object, and with all the variety of Hills, and Valleys, and Inequalities far more grateful to behold, than a perfectly level Countrey without any rising or protuberancy, to terminate the sight: As anyone that hath but seen the Isle of Ely, or any the like Countrey must need acknowledge.

Miscellaneous Discourses Concerning the Dissolution and Changes of the World (1692), 165-6.

In Nature nothing can be lost, nothing wasted, nothing thrown away, there is no such thing as rubbish. 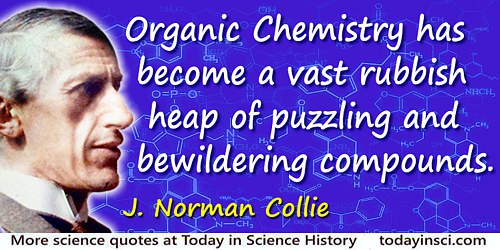 Organic Chemistry has become a vast rubbish heap of puzzling and bewildering compounds.

Tedious as it may appear to some to dwell on the discovery of odds and ends that have, no doubt, been thrown away by the owner as rubbish ... yet it is by the study of such trivial details that Archaeology is mainly dependent for determining the date of earthworks. ... Next to coins fragments of pottery afford the most reliable of all evidence ... In my judgement, a fragment of pottery, if it throws light on the history of our own country and people, is of more interest to the scientific collector of evidence in England, than even a work of art and merit that is associated only with races that we are remotely connected with.
On the importance of pottery to an archaeologist.

The Commonwealth of Learning is not at this time without Master-Builders, whose mighty Designs, in advancing the Sciences, will leave lasting Monuments to the Admiration of Posterity; But every one must not hope to be a Boyle, or a Sydenham; and in an Age that produces such Masters, as the Great-Huygenius, and the incomparable Mr. Newton, with some other of that Strain; 'tis Ambition enough to be employed as an Under-Labourer in clearing Ground a little, and removing some of the Rubbish, that lies in the way to Knowledge.

They say that every formula halves the sales of a popular science book. This is rubbishif it was true, then The Emperors New Mind by Roger Penrose would have sold one-eighth of a copy, whereas its actual sales were in the hundreds of thousands.

In Terry Pratchett, Ian Stewart and Jack Cohen, The Science of Discworld (2014), 23.