Original German as quoted by Paul Krische, Wie Studiert man Chemie? (1904), 67, who also stated that Peter Reiss was a friend of Friedrich WÃ¶hler (both chemists). English version as given in Chemisch Weekblad (1925), 22, 363. In more recent books, the quote is cited as by physicist Johann Philipp Reis. This confusion appears, for example in Ralph Oesper, The Human Side of Scientists (1975), 116.

Webmaster believes this quote should be attributed to Peter Reiss, having found the following example cited for Peter Reiss. Original German as quoted by Paul Krische, Wie Studiert man Chemie? (1904), 67, who also stated that Peter Reiss was a friend of Friedrich WÃ¶hler (both chemists). English version as given in Chemisch Weekblad (1925), 22, 363. In various recent books, the quote is cited as by physicist Johann Philipp Reis. This confusion appears, for example in Ralph Oesper, The Human Side of Scientists (1975), 116.

As quoted in Arthur Koestler, The Sleep Walkers: A History of Manâ€™s Changing Vision of the Universe (1959), 243, citing De Stella Nova in Pede Serpentarii (1606).

Anything worth doing is worth doing twice, the first time quick and dirty and the second time the best way you can.

As quoted in Steven Chu and Charles H. Townes, 'Arthur Schawlow', Biographical Memoirs of the National Academy of Sciences (2003), Vol. 83, 201.

Engineering stimulates the mind. Kids get bored easily. They have got to get out and get their hands dirty: make things, dismantle things, fix things. When schools can offer that, youâ€™ll have an engineer for life.

As quoted on imdb.com biography page for Bruce Dickinson. Webmaster has not yet found a primary source for this quote. Can you help?

Feeling weightlessâ€¦ itâ€™s so many things together. A feeling of pride, of healthy solitude, of dignified freedom from everything thatâ€™s dirty, sticky. You feel exquisitely comfortable . . . and you feel you have so much energy, such an urge to do things, such an ability to do things. And you work well, yes, you think well, without sweat, without difficulty as if the biblical curse in the sweat of thy face and in sorrow no longer exists, As if youâ€™ve been born again.

I mean, if 10 years from now, when you are doing something quick and dirty, you suddenly visualize that I am looking over your shoulders and say to yourself â€˜Dijkstra would not have liked thisâ€™, well, that would be enough immortality for me.

Iron and coal dominated everywhere, from grey to black: the black boots, the black stove-pipe hat, the black coach or carriage, the black iron frame of the hearth, the black cooking pots and pans and stoves. Was it a mourning? Was it protective coloration? Was it mere depression of the senses? No matter what the original color of the paleotechnic milieu might be it was soon reduced by reason of the soot and cinders that accompanied its activities, to its characteristic tones, grey, dirty-brown, black.

Reductionism is a dirty word, and a kind of 'holistier than thou' self-righteousness has become fashionable.

Something will have gone out of us as a people if we ever let the remaining wilderness be destroyed; if we permit the last virgin forests to be turned into comic books and plastic cigarette cases; if we drive the few remaining members of the wild species into zoos or to extinction; if we pollute the last clean air and dirty the last clean streams and push our paved roads through the last of the silence, so that never again will Americans be free in their own country from the noise, the exhausts, the stinks of human and automotive waste.

There is a point of view among astronomical researchers that is generally referred to as the Principle of Mediocrity. ... If the Sun and its retinue of worlds is only one system among many, then many other systems will be like ours: home to life. Indeed, to the extent that this is true, we should be prepared for the possibility that, even in the Milky Way galaxy, billions of planets may be carpeted by the dirty, nasty business known as life. 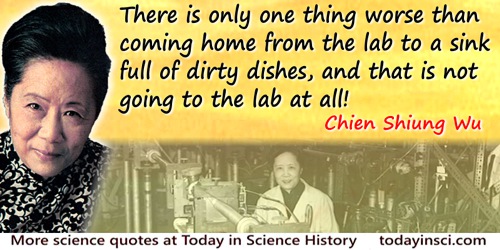 There is only one thing worse than coming home from the lab to a sink full of dirty dishes, and that is not going to the lab at all!

This is the question
Marry
Childrenâ€”(if it Please God)â€”Constant companion (& friend in old age) who will feel interested in oneâ€”object to be beloved and played withâ€”better than a dog anyhow. Home, & someone to take care of houseâ€”Charms of music and female chit-chat.â€”These things good for oneâ€™s health.â€”but terrible loss of time.â€”
My God, it is Intolerable to think of spending ones whole life, like a neuter bee, working, workingâ€”& nothing after all.â€”No, no, wonâ€™t do. Imagine living all oneâ€™s day solitary in smoky dirty London House.â€”Only picture to yourself a nice soft wife on a sofa with good fire, & books & music perhaps-â€”Compare this vision with the dingy reality of Grt. Marlbroâ€™ Street.
Not Marry
Freedom to go where one likedâ€”choice of Society and little of it. â€”Conversation of clever men at clubsâ€”Not forced to visit relatives, & to bend in every trifle. â€”to have the expense and anxiety of childrenâ€”perhaps quarrelingâ€”Loss of time. â€”cannot read in the Eveningsâ€”fatness & idlenessâ€”Anxiety & responsibilityâ€”less money for books &câ€”if many children forced to gain oneâ€™s bread. â€”(but then it is very bad for ones health to work too much)
Perhaps my wife wonâ€™t like London; then the sentence is banishment & degradation into indolent, idle fool.
Marryâ€”Marryâ€”Marry Q.E.D.
It being proved necessary to Marry When? Soon or late?

We can continue to try and clean up the gutters all over the world and spend all of our resources looking at just the dirty spots and trying to make them clean. Or we can lift our eyes up and look into the skies and move forward in an evolutionary way.

[In early mill designs, from repeated handling, the flour was mixed with a] great quantity of dirt â€¦ from the dirty feet of every one who trampled in it, trailing it over the whole Mill and wasting much â€¦ [for] people did not even then like to eat dirt, if they could see it.

As quoted in Dave DeWitt, The Founding Foodies: How Washington, Jefferson, and Franklin Revolutionized American Cuisine (2010), 82. Shorter quote cited in Carroll Pursell, The Machine in America: A Social History of Technology (1995), Notes, 322, as being quoted from Greeville and Dorothy Bathe, Oliver Evans: A Chronicle of Early American Engineering (1935), 12.

[Smoking is] a dirty habit that should be banned from America by the Government, instead of moderate alcoholic drinking.

As quoted by Gobind Behari Lal, Universal Service Science Editor, as printed in Syracuse Journal (13 Jan 1933), 4. At the time, there was Prohibition of alcoholic drinks in America. Piccard was interviewed in New York on his arrival from Brussels onboard the Champlain by newspaper and motion picture men. Because he was so vigorously opposed to smoking, he required that nobody smoked during the interview in the childrenâ€™s dining room.