The Annotated Alice, of course, does tie in with math, because Lewis Carroll was, as you know, a professional mathematician. So it wasnt really too far afield from recreational math, because the two books are filled with all kinds of mathematical jokes. I was lucky there in that I really didnt have anything new to say in The Annotated Alice because I just looked over the literature and pulled together everything in the form of footnotes. But it was a lucky idea because thats been the best seller of all my books.

At first he who invented any art that went beyond the common perceptions of man was naturally admired by men, not only because there was something useful in the inventions, but because he was thought wise and superior to the rest. But as more arts were invented, and some were directed to the necessities of life, others to its recreation, the inventors of the latter were always regarded as wiser than the inventors of the former, because their branches of knowledge did not aim at utility.

Be very vigilent over thy Childe  If he chuse the profession of a Scholler, advise him to study the most profitable Arts: Poetry, and the Mathematichs, take up too great a latitude of the Soule, and moderately used, are good Recreations, but bad Callings, bring nothing but their owne Reward.

Büchsel in his reminiscences from the life of a country parson relates that he sought his recreation in Lacroixs Differential Calculus and thus found intellectual refreshment for his calling. Instances like this make manifest the great advantage which occupation with mathematics affords to one who lives remote from the city and is compelled to forego the pleasures of art. The entrancing charm of mathematics, which captivates every one who devotes himself to it, and which is comparable to the fine frenzy under whose ban the poet completes his work, has ever been incomprehensible to the spectator and has often caused the enthusiastic mathematician to be held in derision. A classic illustration is the example of Archimedes. 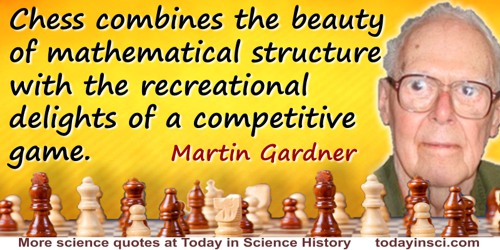 Chess combines the beauty of mathematical structure with the recreational delights of a competitive game.

He who gives a portion of his time and talent to the investigation of mathematical truth will come to all other questions with a decided advantage over his opponents. He will be in argument what the ancient Romans were in the field: to them the day of battle was a day of comparative recreation, because they were ever accustomed to exercise with arms much heavier than they fought; and reviews differed from a real battle in two respects: they encountered more fatigue, but the victory was bloodless.

I should like to urge some arguments for wilderness preservation that involve recreation,. Hunting, fishing, hiking, mountain-climbing, camping, photography, and the enjoyment of natural scenery will all, surely, figure in your report. So will the wilderness as a genetic reserve, a scientific yardstick by which we may measure the world in its natural balance against the world in its man-made imbalance.

If we range through the whole territory of nature, and endeavour to extract from each department the rich stores of knowledge and pleasure they respectively contain, we shall not find a more refined or purer source of amusement, or a more interesting and unfailing subject for recreation, than that which the observation and examination of the structure, affinities, and habits of plants and vegetables, afford.

In A Practical Treatise on the Cultivation of the Dahlia (1838), 2.

In our time this search [for extraterrestrial life] will eventually change our laws, our religions, our philosophies, our arts, our recreations, as well as our sciences. Space, the mirror, waits for life to come look for itself there.

Leaving those [exercises] of the Body, I shall proceed to such Recreations as adorn the Mind; of which those of the Mathematicks are inferior to none.

In Pleasure with Profit: Consisting of Recreations of Divers Kinds (1694), v.

Nature, who is a great economist, converts the recreation of one animal to the support of another.

Science is the labor and handicraft of the mind; poetry can only be considered its recreation.

The Europeans and the Americans are not throwing $10 billion down this gigantic tube for nothing. We're exploring the very forefront of physics and cosmology with the Large Hadron Collider because we want to have a window on creation, we want to recreate a tiny piece of Genesis to unlock some of the greatest secrets of the universe.

These are some of the things wilderness can do for us. That is the reason we need to put into effect, for its preservation, some other principle that the principles of exploitation or usefulness or even recreation. We simply need that wild country available to us, even if we never do more than drive to its edge and look in. For it can be a means of reassuring ourselves of our sanity as creatures, a part of the geography of hope.

This is a huge step toward unraveling Genesis Chapter 1, Verse 1—what happened in the beginning. This is a Genesis machine. It'll help to recreate the most glorious event in the history of the universe.
[Comment on a milestone experiment, the collision of two proton beams at higher energy than ever before, upon the restarting of the Large Hadron Collider after a major failure and shutdown for repair.]

When he had a few moments for diversion, he [Napoleon] not unfrequently employed them over a book of logarithms, in which he always found recreation.