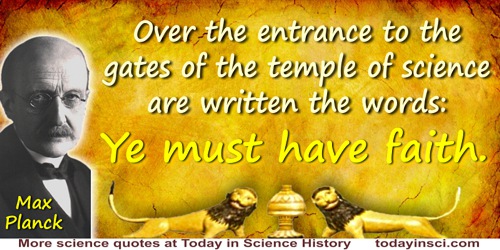 According to my views, aiming at quantitative investigations, that is at establishing relations between measurements of phenomena, should take first place in the experimental practice of physics. By measurement to knowledge [door meten tot weten] I should like to write as a motto above the entrance to every physics laboratory.

'The Significance of Quantitative Research in Physics', Inaugural Address at the University of Leiden (1882). In Hendrik Casimir, Haphazard Reality: Half a Century of Science (1983), 160-1.

Anybody who has been seriously engaged in scientific work of any kind realizes that over the entrance to the gates of the temple of science are written the words: Ye must have faith. It is a quality which the scientist cannot dispense with.

At the entrance to the observatory Stjerneborg located underground, Tycho Brahe built a Ionic portal. On top of this were three sculptured lions. On both sides were inscriptions and on the backside was a longer inscription in gold letters on a porfyr stone: Consecrated to the all-good, great God and Posterity. Tycho Brahe, Son of Otto, who realized that Astronomy, the oldest and most distinguished of all sciences, had indeed been studied for a long time and to a great extent, but still had not obtained sufficient firmness or had been purified of errors, in order to reform it and raise it to perfection, invented and with incredible labour, industry, and expenditure constructed various exact instruments suitable for all kinds of observations of the celestial bodies, and placed them partly in the neighbouring castle of Uraniborg, which was built for the same purpose, partly in these subterranean rooms for a more constant and useful application, and recommending, hallowing, and consecrating this very rare and costly treasure to you, you glorious Posterity, who will live for ever and ever, he, who has both begun and finished everything on this island, after erecting this monument, beseeches and adjures you that in honour of the eternal God, creator of the wonderful clockwork of the heavens, and for the propagation of the divine science and for the celebrity of the fatherland, you will constantly preserve it and not let it decay with old age or any other injury or be removed to any other place or in any way be molested, if for no other reason, at any rate out of reverence to the creators eye, which watches over the universe. Greetings to you who read this and act accordingly. Farewell!

(Translated from the original in Latin)

Büchsel in his reminiscences from the life of a country parson relates that he sought his recreation in Lacroixs Differential Calculus and thus found intellectual refreshment for his calling. Instances like this make manifest the great advantage which occupation with mathematics affords to one who lives remote from the city and is compelled to forego the pleasures of art. The entrancing charm of mathematics, which captivates every one who devotes himself to it, and which is comparable to the fine frenzy under whose ban the poet completes his work, has ever been incomprehensible to the spectator and has often caused the enthusiastic mathematician to be held in derision. A classic illustration is the example of Archimedes.

In a word, I consider hospitals only as the entrance to scientific medicine; they are the first field of observation which a physician enters; but the true sanctuary of medical science is a laboratory; only there can he seek explanations of life in the normal and pathological states by means of experimental analysis.

In the beginning God created Heaven and Earth  Which beginning of time, according to our Cronologie, fell upon the entrance of the night preceding the twenty third day of Octob. in the year of the Julian Calendar, 710 [or 4004 B.C.]. Upon the first day therefore of the world, or Octob. 23. being our Sunday, God, together with the highest Heaven, created the Angels. Then having finished, as it were, the roofe of this building, he fell in hand with the foundation of this wonderfull Fabrick of the World, he fashioned this lowermost Globe, consisting of the Deep, and of the Earth; all the Quire of Angels singing together and magnifying his name therefore  And when the Earth was void and without forme, and darknesse covered the face of the Deepe, on the very middle of the first day, the light was created; which God severing from the darknesses, called the one day, and the other night.

In the beginning of the year 1665 I found the Method of approximating series & the Rule for reducing any dignity of any Bionomial into such a series. The same year in May I found the method of Tangents of Gregory & Slusius, & in November had the direct method of fluxions & the next year in January had the Theory of Colours & in May following I had entrance into ye inverse method of fluxions. And the same year I began to think of gravity extending to ye orb of the Moon & (having found out how to estimate the force with wch [a] globe revolving within a sphere presses the surface of the sphere) from Keplers rule of the periodic times of the Planets being in sesquialterate proportion of their distances from the center of their Orbs, I deduced that the forces wch keep the Planets in their Orbs must [be] reciprocally as the squares of their distances from the centers about wch they revolve: & thereby compared the force requisite to keep the Moon in her Orb with the force of gravity at the surface of the earth, & found them answer pretty nearly. All this was in the two plague years of 1665-1666. For in those days I was in the prime of my age for invention & minded Mathematicks & Philosophy more then than at any time since.

Said to have been inscribed above the door of Plato's Academy. As stated in A.S. Riginos, Platonica: the Anecdotes concerning the Life and Writings of Plato (1976), 38-40.

On entering a temple we assume all signs of reverence. How much more reverent then should we be before the heavenly bodies, the stars, the very nature of God!

One rarely hears of the mathematical recitation as a preparation for public speaking. Yet mathematics shares with these studies [foreign languages, drawing and natural science] their advantages, and has another in a higher degree than either of them.
Most readers will agree that a prime requisite for healthful experience in public speaking is that the attention of the speaker and hearers alike be drawn wholly away from the speaker and concentrated upon the thought. In perhaps no other classroom is this so easy as in the mathematical, where the close reasoning, the rigorous demonstration, the tracing of necessary conclusions from given hypotheses, commands and secures the entire mental power of the student who is explaining, and of his classmates. In what other circumstances do students feel so instinctively that manner counts for so little and mind for so much? In what other circumstances, therefore, is a simple, unaffected, easy, graceful manner so naturally and so healthfully cultivated? Mannerisms that are mere affectation or the result of bad literary habit recede to the background and finally disappear, while those peculiarities that are the expression of personality and are inseparable from its activity continually develop, where the student frequently presents, to an audience of his intellectual peers, a connected train of reasoning.
One would almost wish that our institutions of the science and art of public speaking would put over their doors the motto that Plato had over the entrance to his school of philosophy: Let no one who is unacquainted with geometry enter here.

The only equipment lack in the modern hospital? Somebody to meet you at the entrance with a handshake!

We are quite ignorant of the condition of energy in bodies generally. We know how much gas goes in, and how much comes out, and know whether at entrance and exit it is in the form of heat or of work. That is all.

Winter opened its vaults last night, flinging fistfuls of crystalline diamonds into the darkening sky. Like white-tulled ballerinas dancing gracefully on heavens stage, silent stars stood entranced by their intricate beauty. Motionless, I watched each lacy gem drift softly by my upturned face, as winters icy hands guided them gently on their swirling lazy way, and blanketed the waiting earth in cold splendor. The shivering rustling of reeds, the restless fingers of the trees snapping in the frosty air, broke the silent stillness, as winter quietly pulled up its white coverlet over the sleepy earth.