At the entrance to the observatory Stjerneborg located underground, Tycho Brahe built a Ionic portal. On top of this were three sculptured lions. On both sides were inscriptions and on the backside was a longer inscription in gold letters on a porfyr stone: Consecrated to the all-good, great God and Posterity. Tycho Brahe, Son of Otto, who realized that Astronomy, the oldest and most distinguished of all sciences, had indeed been studied for a long time and to a great extent, but still had not obtained sufficient firmness or had been purified of errors, in order to reform it and raise it to perfection, invented and with incredible labour, industry, and expenditure constructed various exact instruments suitable for all kinds of observations of the celestial bodies, and placed them partly in the neighbouring castle of Uraniborg, which was built for the same purpose, partly in these subterranean rooms for a more constant and useful application, and recommending, hallowing, and consecrating this very rare and costly treasure to you, you glorious Posterity, who will live for ever and ever, he, who has both begun and finished everything on this island, after erecting this monument, beseeches and adjures you that in honour of the eternal God, creator of the wonderful clockwork of the heavens, and for the propagation of the divine science and for the celebrity of the fatherland, you will constantly preserve it and not let it decay with old age or any other injury or be removed to any other place or in any way be molested, if for no other reason, at any rate out of reverence to the creatorâ€™s eye, which watches over the universe. Greetings to you who read this and act accordingly. Farewell!

(Translated from the original in Latin)

For if there is any truth in the dynamical theory of gases the different molecules in a gas at uniform temperature are moving with very different velocities. Put such a gas into a vessel with two compartments [A and B] and make a small hole in the wall about the right size to let one molecule through. Provide a lid or stopper for this hole and appoint a doorkeeper, very intelligent and exceedingly quick, with microscopic eyes but still an essentially finite being.
Whenever he sees a molecule of great velocity coming against the door from A into B he is to let it through, but if the molecule happens to be going slow he is to keep the door shut. He is also to let slow molecules pass from B to A but not fast ones ... In this way the temperature of B may be raised and that of A lowered without any expenditure of work, but only by the intelligent action of a mere guiding agent (like a pointsman on a railway with perfectly acting switches who should send the express along one line and the goods along another).
I do not see why even intelligence might not be dispensed with and the thing be made self-acting.
Moral The 2nd law of Thermodynamics has the same degree of truth as the statement that if you throw a tumblerful of water into the sea you cannot get the same tumblerful of water out again.

In all cases where work is produced by heat, a quantity of heat proportional to the work done is expended; and inversely, by the expenditure of a like quantity of work, the same amount of heat may be produced.

'On the Moving Force of Heat, and the Laws regarding the Nature of Heat itself which are deducible therefrom', Philosophical Magazine, 1851, 2, 4.

It is one of the laws of life that each acquisition has its cost. No organism can exercise power without yielding up part of its substance. The physiological law of Transfer of Energy is the basis of human success and happiness. There is no action without expenditure of energy and if energy be not expended the power to generate it is lost. This law shows itself in a thousand ways in the life of man. The arm which is not used becomes palsied. The wealth which comes by chance weakens and destroys. The good which is unused turns to evil. The charity which asks no effort cannot relieve the misery she creates.

In The Strength of Being Clean: A Study of the Quest for Unearned Happiness (1900), 6.

It is supposed that the ancients were ignorant of the law in hydraulics, by which water, in a tube, will rise as high as the fountain-head; and hence they carried their stupendous aqueducts horizontally, from hill-top to hill-top, upon lofty arches, with an incredible expenditure of labor and money. The knowledge of a single law, now familiar to every well-instructed school-boy,— namely, that water seeks a level, and, if not obstructed, will find it,—enables the poorest man of the present day to do what once demanded the wealth of an empire. The beautiful fragments of the ancient Roman aqueducts, which have survived the ravage of centuries, are often cited to attest the grandeur and power of their builders. To me, they are monuments, not of their power, but of their weakness.

Look at life as an energy economy game. Each day, ask yourself, Are my energy expenditures (actions, reactions, thoughts, and feelings) productive or nonproductive? During the course of my day, have I accumulated more stress or more peace?

Science by itself produces a very badly deformed man who becomes rounded out into a useful creative being only with great difficulty and large expenditure of time. â€¦ It is a much smaller matter to both teach and learn pure science than it is to intelligently apply this science to the solution of problems as they arise in daily life. 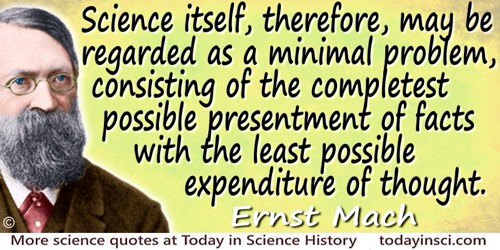 Science itself, therefore, may be regarded as a minimal problem, consisting of the completest possible presentment of facts with the least possible expenditure of thought.

Ernst Mach and Thomas Joseph McCormick (trans.), The Science of Mechanics: a Critical and Historical Account of its Development (1919), 490.

Sweat silently. Let's have no squawking about a little expenditure of energy.

The animal frame, though destined to fulfill so many other ends, is as a machine more perfect than the best contrived steam-engineâ€”that is, is capable of more work with the same expenditure of fuel.

The expenditure [on building railways] of ÂŁ286,000,000 by the people has secured to us the advantages of internal communication all but perfect,â€”of progress in science and arts unexampled at any period of the history of the world,â€”of national progress almost unchecked, and of prosperity and happiness increased beyond all precedent.

From 'Railway System and its Results' (Jan 1856) read to the Institution of Civil Engineers, reprinted in Samuel Smiles, Life of George Stephenson (1857), 512.

There is another ground of hope that must not be omitted. Let men but think over their infinite expenditure of understanding, time, and means on matters and pursuits of far less use and value; whereof, if but a small part were directed to sound and solid studies, there is no difficulty that might not be overcome.

Thou canst not make water flow uphill but by expenditure of greater force than draws it down. The spirit of fire can do this,â€”converting it to steam. Spiritualise water, and it ascends in spite of itself.

To the distracting occupations belong especially my lecture courses which I am holding this winter for the first time, and which now cost much more of my time than I like. Meanwhile I hope that the second time this expenditure of time will be much less, otherwise I would never be able to reconcile myself to it, even practical (astronomical) work must give far more satisfaction than if one brings up to B a couple more mediocre heads which otherwise would have stopped at A.