All war is murder, robbery, trickery, and no nation ever escaped losses of men, prosperity and virility. War knows no victor.

As the world has seen its age of stone, its age of bronze, and its age of iron, so it may before long have embarked on a new and even more prosperous erathe age of aluminium.

Concluding remark in uncredited 'Topics of the Day' article, 'The Future of Aluminium', The Spectator (15 Jul 1893), 77. 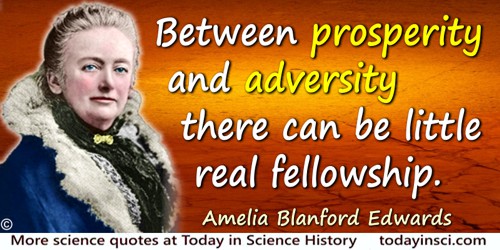 Between prosperity and adversity there can be little real fellowship.

England was nothing, compared to continental nations until she had become commercial  until about the middle of the last century, when a number of ingenious and inventive men, without apparent relation to each other, arose in various parts of the kingdom, succeeded in giving an immense impulse to all the branches of the national industry; the result of which has been a harvest of wealth and prosperity, perhaps without a parallel in the history of the world.

He who contemplates nature finds an inexhaustible source of wonder and pleasure in considering, among the class of insects, their forms, their colours, the different offensive and defensive weapons with which they are provided, their curious habitudes, the bond of union which is shewn in some kinds, and the prudence and industry which they employ, less indeed for their individual preservation than with a view to secure the perpetuity of the species, while yielding to the soft and powerful impulse of nature. But if this innumerable family of little animals furnishes ample matter for the curious researches of the naturalist, it affords also a subject of meditation for public economy, since some kinds of these beings cause even national calamities, while on the contrary other species greatly contribute to the prosperity of states and individuals.

I am confident that if we recommit ourselves to discovery; if we support science education to create the next generation of scientists and engineers right here in America; if we have the vision to believe and invest in things unseen, then we can lead the world into a new future of peace and prosperity.

If we are to follow in the wake of other countries in the pursuit of material prosperity, we must give up aimless activities and bring our ideals into line with the standards of the West, namely, to spread education in all grades, multiply occupations and increase production and wealth. All other activities should conform themselves to the economic ideal.

In our warm climate, we have not got the same incentive to exertion and we may never be able to attain the same level of prosperity as Western people.

Man cannot have an effect on nature, cannot adopt any of her forces, if he does not know the natural laws in terms of measurement and numerical relations. Here also lies the strength of the national intelligence, which increases and decreases according to such knowledge. Knowledge and comprehension are the joy and justification of humanity; they are parts of the national wealth, often a replacement for the materials that nature has too sparcely dispensed. Those very people who are behind us in general industrial activity, in application and technical chemistry, in careful selection and processing of natural materials, such that regard for such enterprise does not permeate all classes, will inevitably decline in prosperity; all the more so were neighbouring states, in which science and the industrial arts have an active interrelationship, progress with youthful vigour.

Our civilization is an engineering civilization, and the prosperous life of the large population, which our earth now supports has become possible only by the work of the engineer. Engineering, however, is the application of science to the service of man, and so to-day science is the foundation, not only of our prosperity, but of our very existence, and thus necessarily has become the dominant power in our human society.

Problems in human engineering will receive during the coming years the same genius and attention which the nineteenth century gave to the more material forms of engineering.
We have laid good foundations for industrial prosperity, now we want to assure the happiness and growth of the workers through vocational education, vocational guidance, and wisely managed employment departments. A great field for industrial experimentation and statemanship is opening up.

Letter printed in Engineering Magazine (Jan 1917), cover. Quoted in an article by Meyer Bloomfield, 'Relation of Foremen to the Working Force', reproduced in Daniel Bloomfield, Selected Articles on Employment Management (1919), 301.

Progress on modern lines is a necessity. We cannot afford to ignore scientific discoveries which have almost vivified material nature. Past ideals were for past times. We must adapt ourselves to the everlasting conditions of existence or be content to be left behind in the race for material prosperity.

The advancement and perfection of mathematics are intimately connected with the prosperity of the State.

The expenditure [on building railways] of £286,000,000 by the people has secured to us the advantages of internal communication all but perfect,of progress in science and arts unexampled at any period of the history of the world,of national progress almost unchecked, and of prosperity and happiness increased beyond all precedent.

From 'Railway System and its Results' (Jan 1856) read to the Institution of Civil Engineers, reprinted in Samuel Smiles, Life of George Stephenson (1857), 512.

The future of humanity is uncertain, even in the most prosperous countries, and the quality of life deteriorates; and yet I believe that what is being discovered about the infinitely large and the infinitely small is sufficient to absolve this end of the century and millennium. What a very few are acquiring in knowledge of the physical world will perhaps cause this period not to be judged as a pure return to barbarism.

The Pacific coral reef, as a kind of oasis in a desert, can stand as an object lesson for man who must now learn that mutualism between autotrophic and heterotrophic components, and between producers and consumers in the societal realm, coupled with efficient recycling of materials and use of energy, are the keys to maintaining prosperity in a world of limited resources.

The progression of physical science is much more connected with your prosperity than is usually imagined. You owe to experimental philosophy some of the most important and peculiar of your advantages. It is not by foreign conquests chiefly that you are become great, but by a conquest of nature in your own country.

The road to happiness and prosperity lies in an organized diminution of work.

This is a moment to seize. The kaleidoscope has been shaken. The pieces are in flux. Soon they will settle again. Before they do, let us re-order this world around us. Today, humankind has the science and technology to destroy itself or to provide prosperity to all. Yet science cant make that choice for us. Only the moral power of a world acting as a community can.

Unless we [practice conservation], those who come after us will have to pay the price of misery, degradation, and failure for the progress and prosperity of our day.

We have before us the restoration of that ancient land whose name was a synonym for abundance, prosperity, and grandeur for many generations. Records as old as those of Egypt and as well attested tell of fertile lands and teeming populations, mighty kings and warriors, sages and wise men, over periods of thousands of years. ... A land such as this is worth resuscitating. Once we have apprehended the true cause of its present desolate and abandoned condition, we are on our way to restoring it to its ancient fertility. A land which so readily responded to ancient science, and gave a return which sufficed for the maintenance of a Persian Court in all its splendor, will surely respond to the efforts of modern science and return manifold the money and talent spent on its regeneration.

From The Restoration of the Ancient Irrigation Works on the Tigris: or, The Re-creation of Chaldea (1903), 30.

We may fairly judge of the commercial prosperity of a country from the amount of sulphuric acid it consumes.

Whether its the science to slow global warming; the technology to protect our troops and confront bioterror and weapons of mass destruction; the research to find life-saving cures; or the innovations to remake our industries and create twenty-first century jobsToday, more than ever before, science holds the key to our survival as a planet and our security and prosperity as a nation. Its time we once again put science at the top of our agenda and work to restore Americas place as the world leader in science and technology.