Aluminiumâ€™s sixty-year reign as the worldâ€™s most precious substance was glorious, but soon an American chemist [Charles Hall] ruined everything.

In The Disappearing Spoon: And Other True Tales of Madness, Love, and the History of the World from the Periodic Table of the Elements (2010), 235. 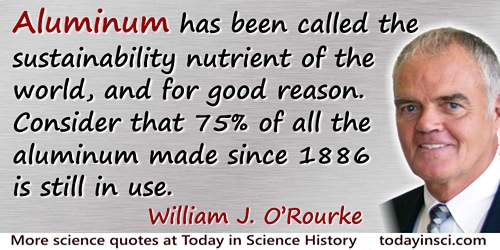 Aluminum has been called the sustainability nutrient of the world, and for good reason. Consider that 75% of all the aluminum made since 1886 is still in use. So from a sustainability standpoint alone, yes, [Charles] Hall really did become that benefactor to humanityâ€”big time.

Aluminum is at once as white as silver, as incorrodible as gold, as tenacious as iron, as fusible as copper, and as light as glass. It is easily worked; it is widely spread in nature, alumina forming the bases of most rocks; it is three times lighter than iron; in short, it seems to have been created expressly to furnish material for our projectile!

As the world has seen its age of stone, its age of bronze, and its age of iron, so it may before long have embarked on a new and even more prosperous eraâ€”the age of aluminium.

Concluding remark in uncredited 'Topics of the Day' article, 'The Future of Aluminium', The Spectator (15 Jul 1893), 77.

Believe me, this planet has put up with much worse than us. Itâ€™s been through earthquakes, volcanoes, plate tectonics, solar flares, sun-spots, magnetic storms, pole reversals, planetary floods, worldwide fires, tidal waves, wind and water erosion, cosmic rays, ice ages, and hundreds of thousands of years of bombardment by comets, asteroids, and meteors. And people think a few plastic bags and aluminum cans are going to make a difference?

I read about Devilleâ€™s work in France, and found the statement that every clay bank was a mine of aluminum, and that the metal was as costly as silver. I soon after began to think of processes for making aluminum cheaply.

Some months ago we discovered that certain light elements emit positrons under the action of alpha particles. Our latest experiments have shown a very striking fact: when an aluminium foil is irradiated on a polonium preparation [alpha ray emitter], the emission of positrons does not cease immediately when the active preparation is removed: the foil remains radioactive and the emission of radiation decays exponentially as for an ordinary radio-element. We observed the same phenomenon with boron and magnesium.
[Co-author with IrĂ¨ne Joliot-Curie. This one-page paper reported their discovery of artificial radioactivity for which they were awarded the 1935 Nobel Prize for Chemistry.]

The idea formed itself in my mind that if I could get a solution of alumina in something which contained no water, and in a solvent which was chemically more stable than the alumina, this would probably give a bath from which aluminum could be obtained by electrolysis.

We bombarded aluminum with alpha rays â€¦ then after a certain period of irradiation, we removed the source of alpha rays. We now observed that the sheet of aluminum continued to emit positive electrons over a period of several minutes.

Describing the crucial experiment made in 1934 that discovered artificial radioactivity. As quoted in John Daintith and Derek Gjertsen, A Dictionary of Scientists (1999), 287.

We do live in a conceptual trough that encourages such yearning for unknown and romanticized greener pastures of other times. The future doesnâ€™t seem promising, if only because we can extrapolate some disquieting present trends in to further deterioration: pollution, nationalism, environmental destruction, and aluminum bats. Therefore, we tend to take refuge in a rose-colored past ... I do not doubt the salutary, even the essential, properties of this curiously adaptive human trait, but we must also record the down side. Legends of past golden ages become impediments when we try to negotiate our current dilemma.

When first discovered, [aluminum was a precious metal that] cost about 270 dollars a pound; then it fell to 27 dollars, and today a pound of aluminum is worth about nine dollars.