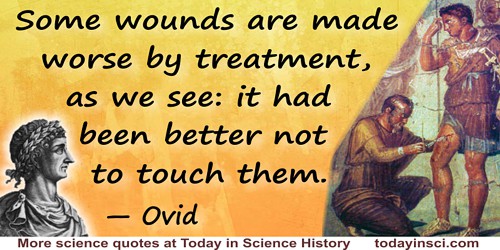 Wall mural uncovered at Pompeii shows a Roman army medic using pinchers to remove an object from a soldierâ€™s wound from before 79 a.d. (source)

Curando fieri quaedam majora videmus vulnera, quae melius non tetigisse fuit.
Some wounds are made worse by treatment, as we see: it had been better not to touch them.

From Epistolae ex Ponto, III., 7, 25. Original Latin and translation in Arthur Leslie Wheeler (trans.), Ovid: With an English Translation: Tristia, Ex Ponto (1939), 416-417. Also seen translated as â€śSome wounds grow worse beneath the surgeonâ€™s hand; â€™Twere better that they were not touched at allâ€ť as in Thomas Benfield Harbottle, Dictionary of Quotations (Classical) (1897), 39. [However, note that this is an artistic translation, not very literal; the words for surgeon or hand do not appear in the Latin text. The Google translation engine outputs this translation of the Latin: â€śWe see greater things to be done taking care of the kind of wounds, which would be better not to touch them.â€ť â€”Webmaster]

Quaedam remedia graviora ipsis periculis sunt.
Some cures are worse than the dangers they combat.

An enthusiastic philosopher, of whose name we are not informed, had constructed a very satisfactory theory on some subject or other, and was not a little proud of it. â€śBut the facts, my dear fellow,â€ť said his friend, â€śthe facts do not agree with your theory.â€ťâ€”â€śDon't they?â€ť replied the philosopher, shrugging his shoulders, â€śthen, tant pis pour les faits;â€ťâ€”so much the worse for the facts!

Anything that the private sector can do, the government can do worse.

Archaeology is the science of digging in the earth to try and find a civilization worse than ours.

Believe me, this planet has put up with much worse than us. Itâ€™s been through earthquakes, volcanoes, plate tectonics, solar flares, sun-spots, magnetic storms, pole reversals, planetary floods, worldwide fires, tidal waves, wind and water erosion, cosmic rays, ice ages, and hundreds of thousands of years of bombardment by comets, asteroids, and meteors. And people think a few plastic bags and aluminum cans are going to make a difference? 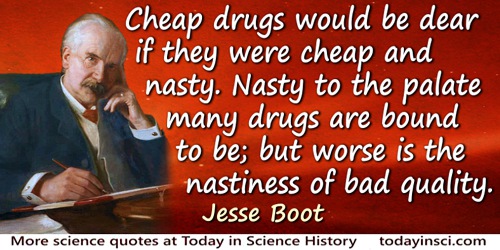 Cheap drugs would be dear if they were cheap and nasty. Nasty to the palate many drugs are bound to be; but worse is the nastiness of bad quality.

During the last two centuries and a half, physical knowledge has been gradually made to rest upon a basis which it had not before. It has become mathematical. The question now is, not whether this or that hypothesis is better or worse to the pure thought, but whether it accords with observed phenomena in those consequences which can be shown necessarily to follow from it, if it be true

In all likelihood, it is the local conditions of society, which determine the form of the disease, and we can so far think of it as a fairly general result, that the simplest form is the more common, the more paltry and unbalanced the food, and the worse the dwellings are.

In the wilderness, people think of danger from Indians, alligators, and jaguars. They are not the things you mind. It is the mosquitoes, the poisonous ants, the maribondo wasps that are perfectly awful. It is the borrachudos and plum fliesâ€”like the black flies of the north woods, only worse â€¦ The day after I threw away my spare clothing ants ate up all my underwear. These were white ants. The driver ants try to eat the man instead of his clothes.

In National Geographic, Great Adventures with National Geographic: Exploring Land, Sea, and Sk (1963), 109. The last sentences about the white and driver ants, with slightly different wording, also appear in Theodore Roosevelt, 'A Journey in Central Brazil', The Geographical Journey (Feb 1915), 45, No. 2, 104, previously read to the Royal Geographic Society (16 Jun 1914).

It is bad when the mind survives the body; and worse still when the body survives the mind; but, when both these survive our spirits, our hopes, and our health, this is worst of all.

It is hard to fail, but it is worse never to have tried to succeed.

Mr. Hillaire Belloc has pointed out that science has changed greatly, and for the worse, since it became popular. Some hundred years ago, or more, only very unusual, highly original spirits were attracted to science at all; scientific work was therefore carried out by men of exceptional intelligence. Now, scientists are turned out by mass production in our universities.

Revolutions of ages do not oft recover the loss of a rejected truth, for the want of which whole nations fare the worse.

In Areopagitica: A speech of Mr John Milton for the Liberty of Unlicenced printing to the Parliament of England (23 Nov 1644), 4.

Science can be introduced to children well or poorly. If poorly, children can be turned away from science; they can develop a lifelong antipathy; they will be in a far worse condition than if they had never been introduced to science at all.

Technology, when misused, poisons air, soil, water and lives. But a world without technology would be prey to something worse: the impersonal ruthlessness of the natural order, in which the health of a species depends on relentless sacrifice of the weak.

The observer is not he who merely sees the thing which is before his eyes, but he who sees what parts the thing is composed of. To do this well is a rare talent. One person, from inattention, or attending only in the wrong place, overlooks half of what he sees; another sets down much more than he sees, confounding it with what he imagines, or with what he infers; another takes note of the kind of all the circumstances, but being inexpert in estimating their degree, leaves the quantity of each vague and uncertain; another sees indeed the whole, but makes such an awkward division of it into parts, throwing into one mass things which require to be separated, and separating others which might more conveniently be considered as one, that the result is much the same, sometimes even worse than if no analysis had been attempted at all.

Though all the winds of doctrine were let loose to play upon the earth, so Truth be in the fieldâ€¦. Let her and Falsehood grapple; who ever knew Truth put to the worse, in a free and open encounter?

We seem ambitious God's whole work to undo.
...With new diseases on ourselves we war,
And with new physic, a worse engine far.

When they have discovered truth in nature they fling it into a book, where it is in even worse hands.

You tell your doctor, that yâ€™are ill
and what does he, but write a bill?
Of which you need not read one letter;
The worse the scrawl, the dose the better,
For if you knew but what you take,
Though you recover, he must break.

[To the cultures of Asia and the continent of Africa] it is the Western impact which has stirred up the winds of change and set the processes of modernization in motion. Education brought not only the idea of equality but also another belief which we used to take for granted in the West—the idea of progress, the idea that science and technology can be used to better human conditions. In ancient society, men tended to believe themselves fortunate if tomorrow was not worse than today and anyway, there was little they could do about it.