Another great and special excellence of mathematics is that it demands earnest voluntary exertion. It is simply impossible for a person to become a good mathematician by the happy accident of having been sent to a good school; this may give him a preparation and a start, but by his own individual efforts alone can he reach an eminent position. 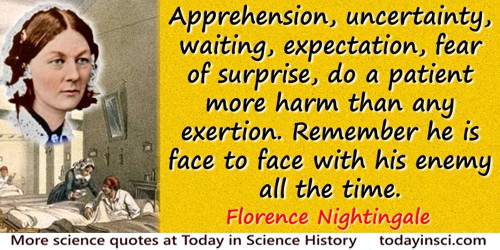 Apprehension, uncertainty, waiting, expectation, fear of surprise, do a patient more harm than any exertion. Remember he is face to face with his enemy all the time.

As there is no study which may be so advantageously entered upon with a less stock of preparatory knowledge than mathematics, so there is none in which a greater number of uneducated men have raised themselves, by their own exertions, to distinction and eminence.  Many of the intellectual defects which, in such cases, are commonly placed to the account of mathematical studies, ought to be ascribed to the want of a liberal education in early youth.

I have come to the conclusion that the exertion, without which a knowledge of mathematics cannot be acquired, is not materially increased by logical rigor in the method of instruction.

I would be the last to deny that the greatest scientific pioneers belonged to an aristocracy of the spirit and were exceptionally intelligent, something that we as modest investigators will never attain, no matter how much we exert ourselves. Nevertheless  I continue to believe that there is always room for anyone with average intelligence  to utilize his energy and  any man could, if he were so inclined, be the sculptor of his own brain, and that even the least gifted may, like the poorest land that has been well-cultivated and fertilized, produce an abundant harvest..

If the term education may be understood in so large a sense as to include all that belongs to the improvement of the mind, either by the acquisition of the knowledge of others or by increase of it through its own exertions, we learn by them what is the kind of education science offers to man. It teaches us to be neglectful of nothing  not to despise the small beginnings, for they precede of necessity all great things in the knowledge of science, either pure or applied.

In our warm climate, we have not got the same incentive to exertion and we may never be able to attain the same level of prosperity as Western people.

It is curious to observe how differently these great men [Plato and Bacon] estimated the value of every kind of knowledge. Take Arithmetic for example. Plato, after speaking slightly of the convenience of being able to reckon and compute in the ordinary transactions of life, passes to what he considers as a far more important advantage. The study of the properties of numbers, he tells us, habituates the mind to the contemplation of pure truth, and raises us above the material universe. He would have his disciples apply themselves to this study, not that they may be able to buy or sell, not that they may qualify themselves to be shop-keepers or travelling merchants, but that they may learn to withdraw their minds from the ever-shifting spectacle of this visible and tangible world, and to fix them on the immutable essences of things.
Bacon, on the other hand, valued this branch of knowledge only on account of its uses with reference to that visible and tangible world which Plato so much despised. He speaks with scorn of the mystical arithmetic of the later Platonists, and laments the propensity of mankind to employ, on mere matters of curiosity, powers the whole exertion of which is required for purposes of solid advantage. He advises arithmeticians to leave these trifles, and employ themselves in framing convenient expressions which may be of use in physical researches.

Science quickens and cultivates directly the faculty of observation, which in very many persons lies almost dormant through life, the power of accurate and rapid generalizations, and the mental habit of method and arrangement; it accustoms young persons to trace the sequence of cause and effect; it familiarizes then with a kind of reasoning which interests them, and which they can promptly comprehend; and it is perhaps the best corrective for that indolence which is the vice of half-awakened minds, and which shrinks from any exertion that is not, like an effort of memory, merely mechanical.

The advancement of agriculture, commerce and manufactures, by all proper means, will not, I trust, need recommendation. But I cannot forbear intimating to you the expediency of giving effectual encouragement as well to the introduction of new and useful inventions from abroad, as to the exertions of skill and genius in producing them at home.

Early suggestion for awarding patent protection. In First Annual Message to Congress on the State of the Union (8 Jan 1790).

The existence of an extensive Science of Mathematics, requiring the highest scientific genius in those who contributed to its creation, and calling for the most continued and vigorous exertion of intellect in order to appreciate it when created, etc.

The necessary has never been mans top priority. The passionate pursuit of the nonessential and the extravagant is one of the chief traits of human uniqueness. Unlike other forms of life, mans greatest exertions are made in the pursuit not of necessities but of superfluities. Man is the only creature that strives to surpass himself, and yearns for the impossible.

Commenting on the first moon landing. In 'Reactions to Mans Landing on the Moon Show Broad Variations in Opinions', The New York Times (21 Jul 1969), 6.

The scientific method is a potentiation of common sense, exercised with a specially firm determination not to persist in error if any exertion of hand or mind can deliver us from it. Like other exploratory processes, it can be resolved into a dialogue between fact and fancy, the actual and the possible; between what could be true and what is in fact the case. The purpose of scientific enquiry is not to compile an inventory of factual information, nor to build up a totalitarian world picture of Natural Laws in which every event that is not compulsory is forbidden. We should think of it rather as a logically articulated structure of justifiable beliefs about nature. It begins as a story about a Possible World—a story which we invent and criticise and modify as we go along, so that it ends by being, as nearly as we can make it, a story about real life.

Induction and Intuition in Scientific Thought (1969), 59.

The theoretical side of physical chemistry is and will probably remain the dominant one; it is by this peculiarity that it has exerted such a great influence upon the neighboring sciences, pure and applied, and on this ground physical chemistry may be regarded as an excellent school of exact reasoning for all students of the natural sciences.

Truth is something that we can attempt to doubt, and then perhaps, after much exertion, discover that part of the doubt is not justified.