About the year 1821, I undertook to superintend, for the Government, the construction of an engine for calculating and printing mathematical and astronomical tables. Early in the year 1833, a small portion of the machine was put together, and was found to perform its work with all the precision which had been anticipated. At that period circumstances, which I could not control, caused what I then considered a temporary suspension of its progress; and the Government, on whose decision the continuance or discontinuance of the work depended, have not yet communicated to me their wishes on the question.

Boundaries which mark off one field of science from another are purely artificial, are set up only for temporary convenience. Let chemists and physicists dig deep enough, and they reach common ground.

Evolution is a theory of organic change, but it does not imply, as many people assume, that ceaseless flux is the irreducible state of nature and that structure is but a temporary incarnation of the moment. Change is more often a rapid transition between stable states than a continuous transformation at slow and steady rates. We live in a world of structure and legitimate distinction. Species are the units of natures morphology.

Happily, facts have become so multiplied, that Geology is daily emerging from that state when an hypothesis, provided it were brilliant and ingenious, was sure of advocates and temporary success, when when it sinned against the laws of physics and the facts themselves.

Hence when a person is in great pain, the cause of which he cannot remove, he sets his teeth firmly together, or bites some substance between them with great vehemence, as another mode of violent exertion to produce a temporary relief. Thus we have the proverb where no help can be has in pain, 'to grin and abide;' and the tortures of hell are said to be attended with 'gnashing of teeth.'Describing a suggestion of the origin of the grin in the present form of a proverb, 'to grin and bear it.'

How many times did the sun shine, how many times did the wind howl over the desolate tundras, over the bleak immensity of the Siberian taigas, over the brown deserts where the Earths salt shines, over the high peaks capped with silver, over the shivering jungles, over the undulating forests of the tropics! Day after day, through infinite time, the scenery has changed in imperceptible features. Let us smile at the illusion of eternity that appears in these things, and while so many temporary aspects fade away, let us listen to the ancient hymn, the spectacular song of the seas, that has saluted so many chains rising to the light.

In science its main worth is temporary, as a stepping-stone to something beyond. Even the Principia, as Newton with characteristic modesty entitled his great work, is truly but the beginning of a natural philosophy, and no more an ultimate work, than Watts steam-engine, or Arkwright's spinning-machine.

Co-author with his brother Augustus William Hare Guesses At Truth, By Two Brothers: Second Edition: With Large Additions (1848), Second Series, 46. (The volume is introduced as more than three fourths new. This quote is identified as by Julius; Augustus had died in 1833.)

It is tempting to wonder if our present universe, large as it is and complex though it seems, might not be merely the result of a very slight random increase in order over a very small portion of an unbelievably colossal universe which is virtually entirely in heat-death. Perhaps we are merely sliding down a gentle ripple that has been set up, accidently and very temporarily, in a quiet pond, and it is only the limitation of our own infinitesimal range of viewpoint in space and time that makes it seem to ourselves that we are hurtling down a cosmic waterfall of increasing entropy, a waterfall of colossal size and duration.

Many consider that the conflict of religion and science is a temporary phase, and that in due course the two mighty rivers of human understanding will merge into an even mightier Amazon of comprehension. I take the opposite view, that reconciliation is impossible. I consider that Science is mightier than the Word, and that the river of religion will (or, at least, should) atrophy and die.

No creature is too bulky or formidable for man's destructive energiesnone too minute and insignificant for his keen detection and skill of capture. It was ordained from the beginning that we should be the masters and subduers of all inferior animals. Let us remember, however, that we ourselves, like the creatures we slay, subjugate, and modify, are the results of the same Almighty creative willtemporary sojourners here, and co-tenants with the worm and the whale of one small planet. In the exercise, therefore, of those superior powers that have been intrusted to us, let us ever bear in mind that our responsibilities are heightened in proportion.

Lecture to the London Society of Arts, 'The Raw Materials of the Animal Kingdom', collected in Lectures on the Results of the Great Exhibition of 1851' (1852), 131.

Such is the tendency of the human mind to speculation, that on the least idea of an analogy between a few phenomena, it leaps forward, as it were, to a cause or law, to the temporary neglect of all the rest; so that, in fact, almost all our principal inductions must be regarded as a series of ascents and descents, and of conclusions from a few cases, verified by trial on many.

The actions of bad men produce only temporary evil, the actions of good men only temporary good ; and eventually the good and the evil altogether subside, are neutralized by subsequent generations, absorbed by the incessant movements of future ages. But the discoveries of great men never leave us; they are immortal; they contain those eternal truths which survive the shock of empires, outlive the struggles of rival creeds, and witness the decay of successive religions.

The epoch of intense cold which preceded the present creation has been only a temporary oscillation of the earths temperature, more important than the century-long phases of cooling undergone by the Alpine valleys. It was associated with the disappearance of the animals of the diluvial epoch of the geologists, as still demonstrated by the Siberian mammoths; it preceded the uplifting of the Alps and the appearance of the present-day living organisms, as demonstrated by the moraines and the existence of fishes in our lakes. Consequently, there is complete separation between the present creation and the preceding ones, and if living species are sometimes almost identical to those buried inside the earth, we nevertheless cannot assume that the former are direct descendants of the latter or, in other words, that they represent identical species.

From Discours de Neuchâtel (1837), as translated by Albert V. Carozzi in Studies on Glaciers: Preceded by the Discourse of Neuchâtel (1967), lviii.

The great basic thought that the world is not to be comprehended as a complex of ready-made things, but as a complex of processes, in which the things apparently stable no less than their mind-images in our heads, the concepts, go through an uninterrupted change of coming into being and passing away, in which, in spite of all seeming accidents and of all temporary retrogression, a progressive development asserts itself in the endthis great fundamental thought has, especially since the time of Hegel, so thoroughly permeated ordinary consciousness that in this generality it is scarcely ever contradicted. 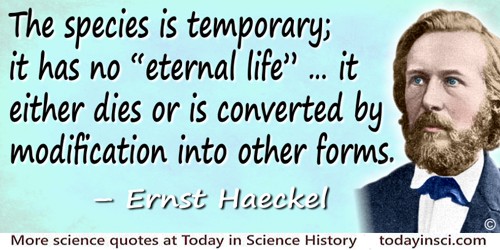 The succession of individuals, connected by reproduction and belonging to a species, makes it possible for the specific form itself to last for ages. In the end, however, the species is temporary; it has no eternal life. After existing for a certain period, it either dies or is converted by modification into other forms.

As translated by Joseph McCabe in Haeckel's The Wonders of Life: a Popular Study of Biological Philosophy (1904), 248.

We often observe in lawyers, who as Quicquid agunt homines is the matter of law suits, are sometimes obliged to pick up a temporary knowledge of an art or science, of which they understood nothing till their brief was delivered, and appear to be much masters of it.