A possible explanation for the observed excess noise is the one given by Dicke, Peebles, Roll, and Wilkinson (1965) in a companion letter in this issue.
[The low-key announcement of the detection of the cosmic microwave background radiation which is the afterglow of the Big Bang. Co-author with Robert Wilson. They received the 1978 Nobel Prize for their discovery.] 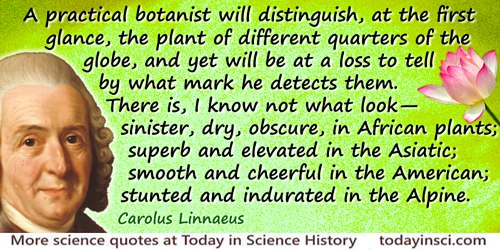 A practical botanist will distinguish, at the first glance, the plant of different quarters of the globe, and yet will be at a loss to tell by what mark he detects them. There is, I know not what looksinister, dry, obscure, in African plants; superb and elevated in the Asiatic; smooth and cheerful in the American; stunted and indurated in the Alpine.

Detection is, or ought to be, an exact science, and should be treated in the same cold unemotional manner. You have attempted to tinge it with romanticism, which produces the same effect as if you worked a love-story into the fifth proposition of Euclid.

By Sherlock Holmes to Dr. Watson, fictional characters in The Sign of Four (1890), 6.

Every detection of what is false directs us towards what is true: every trial exhausts some tempting form of error.

Experiments on ornamental plants undertaken in previous years had proven that, as a rule, hybrids do not represent the form exactly intermediate between the parental strains. Although the intermediate form of some of the more striking traits, such as those relating to shape and size of leaves, pubescence of individual parts, and so forth, is indeed nearly always seen, in other cases one of the two parental traits is so preponderant that it is difficult or quite impossible, to detect the other in the hybrid. The same is true for Pisum hybrids. Each of the seven hybrid traits either resembles so closely one of the two parental traits that the other escapes detection, or is so similar to it that no certain distinction can be made. This is of great importance to the definition and classification of the forms in which the offspring of hybrids appear. In the following discussion those traits that pass into hybrid association entirely or almost entirely unchanged, thus themselves representing the traits of the hybrid, are termed dominating and those that become latent in the association, recessive. The word 'recessive' was chosen because the traits so designated recede or disappear entirely in the hybrids, but reappear unchanged in their progeny, as will be demonstrated later.

If it be urged that the action of the potato is chemical and mechanical only, and that it is due to the chemical and mechanical effects of light and heat, the answer would seem to lie in an enquiry whether every sensation is not chemical and mechanical in its operation? Whether those things which we deem most purely spiritual are anything but disturbances of equilibrium in an infinite series of levers, beginning with those that are too small for microscopic detection, and going up to the human arm and the appliances which it makes use of? Whether there be not a molecular action of thought, whence a dynamical theory of the passions shall be deducible?

No creature is too bulky or formidable for man's destructive energiesnone too minute and insignificant for his keen detection and skill of capture. It was ordained from the beginning that we should be the masters and subduers of all inferior animals. Let us remember, however, that we ourselves, like the creatures we slay, subjugate, and modify, are the results of the same Almighty creative willtemporary sojourners here, and co-tenants with the worm and the whale of one small planet. In the exercise, therefore, of those superior powers that have been intrusted to us, let us ever bear in mind that our responsibilities are heightened in proportion.

Lecture to the London Society of Arts, 'The Raw Materials of the Animal Kingdom', collected in Lectures on the Results of the Great Exhibition of 1851' (1852), 131.

Inborn Errors of Metabolism. The Croonian Lectures delivered before the Royal College of Physicians of London, in June, 1908 (1909), 2-3.

Professor von Pirquet has come to this country exactly at the right time to aid us. He has shown us how to detect tuberculosis before it has become so developed as to be contagious and has so taken hold of the individual as to be recognized by any other means. In thousands of cases I for my part am unable to detect tuberculosis in infancy or early childhood without the aid of the tuberculin test which Prof. von Pirquet has shown to be the best. He has taught us how by tubercular skin tests, to detect it. ... What Dr. von Pirquet has done already will make his name go down to posterity as one of the great reformers in tuberculin tests and as one who has done an immense amount of good to humanity. The skin test in twenty-four hours will show you whether the case is tubercular.

The discoverer and the poet are inventors; and they are so because their mental vision detects the unapparent, unsuspected facts, almost as vividly as ocular vision rests on the apparent and familiar.

The Historic Method may be described as the comparison of the forms of an idea, or a usage, or a belief, at any given time, with the earlier forms from which they were evolved, or the later forms into which they were developed and the establishment from such a comparison, of an ascending and descending order among the facts. It consists in the explanation of existing parts in the frame of society by connecting them with corresponding parts in some earlier frame; in the identification of present forms in the past, and past forms in the present. Its main process is the detection of corresponding customs, opinions, laws, beliefs, among different communities, and a grouping of them into general classes with reference to some one common feature. It is a certain way of seeking answers to various questions of origin, resting on the same general doctrine of evolution, applied to moral and social forms, as that which is being applied with so much ingenuity to the series of organic matter.

The unprecedented identification of the spectrum of an apparently stellar object in terms of a large red-shift suggests either of the two following explanations.
The stellar object is a star with a large gravitational red-shift. Its radius would then be of the order of 10km. Preliminary considerations show that it would be extremely difficult, if not impossible, to account for the occurrence of permitted lines and a forbidden line with the same red-shift, and with widths of only 1 or 2 per cent of the wavelength.
The stellar object is the nuclear region of a galaxy with a cosmological red-shift of 0.158, corresponding to an apparent velocity of 47,400 km/sec. The distance would be around 500 megaparsecs, and the diameter of the nuclear region would have to be less than 1 kiloparsec. This nuclear region would be about 100 times brighter optically than the luminous galaxies which have been identified with radio sources thus far. If the optical jet and component A of the radio source are associated with the galaxy, they would be at a distance of 50 kiloparsecs implying a time-scale in excess of 105 years. The total energy radiated in the optical range at constant luminosity would be of the order of 1059 ergs.
Only the detection of irrefutable proper motion or parallax would definitively establish 3C 273 as an object within our Galaxy. At the present time, however, the explanation in terms of an extragalactic origin seems more direct and less objectionable.