A discovery must be, by definition, at variance with existing knowledge. During my lifetime, I made two. Both were rejected offhand by the popes of the field. Had I predicted these discoveries in my applications, and had those authorities been my judges, it is evident what their decisions would have been.

Geologists have not been slow to admit that they were in error in assuming that they had an eternity of past time for the evolution of the earth's history. They have frankly acknowledged the validity of the physical arguments which go to place more or less definite limits to the antiquity of the earth. They were, on the whole, disposed to acquiesce in the allowance of 100 millions of years granted to them by Lord Kelvin, for the transaction of the whole of the long cycles of geological history. But the physicists have been insatiable and inexorable. As remorseless as Lear's daughters, they have cut down their grant of years by successive slices, until some of them have brought the number to something less than ten millions. In vain have the geologists protested that there must somewhere be a flaw in a line of argument which tends to results so entirely at variance with the strong evidence for a higher antiquity, furnished not only by the geological record, but by the existing races of plants and animals. They have insisted that this evidence is not mere theory or imagination, but is drawn from a multitude of facts which become hopelessly unintelligible unless sufficient time is admitted for the evolution of geological history. They have not been able to disapprove the arguments of the physicists, but they have contended that the physicists have simply ignored the geological arguments as of no account in the discussion.

It will be noticed that the fundamental theorem proved above bears some remarkable resemblances to the second law of thermodynamics. Both are properties of populations, or aggregates, true irrespective of the nature of the units which compose them; both are statistical laws; each requires the constant increase of a measurable quantity, in the one case the entropy of a physical system and in the other the fitness, measured by m, of a biological population. As in the physical world we can conceive the theoretical systems in which dissipative forces are wholly absent, and in which the entropy consequently remains constant, so we can conceive, though we need not expect to find, biological populations in which the genetic variance is absolutely zero, and in which fitness does not increase. Professor Eddington has recently remarked that The law that entropy always increasesthe second law of thermodynamicsholds, I think, the supreme position among the laws of nature. It is not a little instructive that so similar a law should hold the supreme position among the biological sciences. While it is possible that both may ultimately be absorbed by some more general principle, for the present we should note that the laws as they stand present profound differences-(1) The systems considered in thermodynamics are permanent; species on the contrary are liable to extinction, although biological improvement must be expected to occur up to the end of their existence. (2) Fitness, although measured by a uniform method, is qualitatively different for every different organism, whereas entropy, like temperature, is taken to have the same meaning for all physical systems. (3) Fitness may be increased or decreased by changes in the environment, without reacting quantitatively upon that environment. (4) Entropy changes are exceptional in the physical world in being irreversible, while irreversible evolutionary changes form no exception among biological phenomena. Finally, (5) entropy changes lead to a progressive disorganization of the physical world, at least from the human standpoint of the utilization of energy, while evolutionary changes are generally recognized as producing progressively higher organization in the organic world.

Mr Justus Liebig is no doubt a very clever gentleman and a most profound chemist, but in our opinion he knows as much of agriculture as the horse that ploughs the ground, and there is not an old man that stands between the stilts of a plough in Virginia, that cannot tell him of facts totally at variance with his finest spun theories.

Inborn Errors of Metabolism: The Croonian Lectures delivered before the Royal College of Physicians of London, in June, 1908 (1909), 2-3.

The analysis of variance is not a mathematical theorem, but rather a convenient method of arranging the arithmetic.

Remarking on the paper, Statistics in Agricultural Research by J. Wishart, Journal of the Royal Statistical Society, Supplement (1934), 1, 52. As cited in Michael Cowle, Statistics in Psychology: An Historical Perspective (2005), 210.

The function of mutation is to maintain the stock of genetic variance at a high level.

The individual within the collective is never, or hardly ever, conscious of the prevailing thought style, which almost always exerts an absolutely compulsive force upon his thinking and with which it is not possible to be at variance. 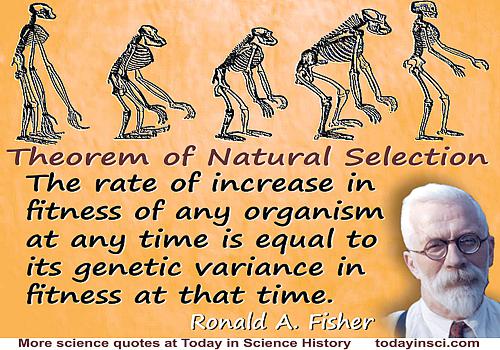 We may consequently state the fundamental theorem of Natural Selection in the form: The rate of increase in fitness of any organism at any time is equal to its genetic variance in fitness at that time.

'The Correlation between Relatives on the Supposition of Mendelian Inheritance,' Transactions of the Royal Society of Edinburgh, 1918, 52, 399.