After Gibbs, one the most distinguished [American scientists] was Langley, of the Smithsonian.  He had the physicists heinous fault of professing to know nothing between flashes of intense perception.  Rigidly denying himself the amusement of philosophy, which consists chiefly in suggesting unintelligible answers to insoluble problems, and liked to wander past them in a courteous temper, even bowing to them distantly as though recognizing their existence, while doubting their respectability. 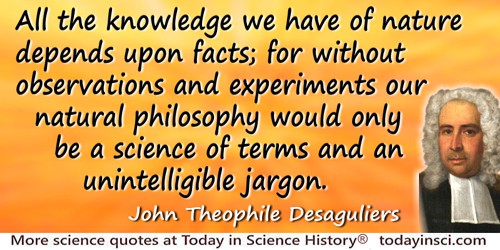 All the knowledge we have of nature depends upon facts; for without observations and experiments our natural philosophy would only be a science of terms and an unintelligible jargon.

Deprived, therefore, as regards this period, of any assistance from history, but relieved at the same time from the embarrassing interference of tradition, the archaeologist is free to follow the methods which have been so successfully pursued in geologythe rude bone and stone implements of bygone ages being to the one what the remains of extinct animals are to the other. The analogy may be pursued even further than this. Many mammalia which are extinct in Europe have representatives still living in other countries. Our fossil pachyderms, for instance, would be almost unintelligible but for the species which still inhabit some parts of Asia and Africa; the secondary marsupials are illustrated by their existing representatives in Australia and South America; and in the same manner, if we wish clearly to understand the antiquities of Europe, we must compare them with the rude implements and weapons still, or until lately, used by the savage races in other parts of the world. In fact, the Van Diemaner and South American are to the antiquary what the opossum and the sloth are to the geologist.

Few will deny that even in the first scientific instruction in mathematics the most rigorous method is to be given preference over all others. Especially will every teacher prefer a consistent proof to one which is based on fallacies or proceeds in a vicious circle, indeed it will be morally impossible for the teacher to present a proof of the latter kind consciously and thus in a sense deceive his pupils. Notwithstanding these objectionable so-called proofs, so far as the foundation and the development of the system is concerned, predominate in our textbooks to the present time. Perhaps it will be answered, that rigorous proof is found too difficult for the pupils power of comprehension. Should this be anywhere the case,which would only indicate some defect in the plan or treatment of the whole,the only remedy would be to merely state the theorem in a historic way, and forego a proof with the frank confession that no proof has been found which could be comprehended by the pupil; a remedy which is ever doubtful and should only be applied in the case of extreme necessity. But this remedy is to be preferred to a proof which is no proof, and is therefore either wholly unintelligible to the pupil, or deceives him with an appearance of knowledge which opens the door to all superficiality and lack of scientific method.

Geologists have not been slow to admit that they were in error in assuming that they had an eternity of past time for the evolution of the earth's history. They have frankly acknowledged the validity of the physical arguments which go to place more or less definite limits to the antiquity of the earth. They were, on the whole, disposed to acquiesce in the allowance of 100 millions of years granted to them by Lord Kelvin, for the transaction of the whole of the long cycles of geological history. But the physicists have been insatiable and inexorable. As remorseless as Lear's daughters, they have cut down their grant of years by successive slices, until some of them have brought the number to something less than ten millions. In vain have the geologists protested that there must somewhere be a flaw in a line of argument which tends to results so entirely at variance with the strong evidence for a higher antiquity, furnished not only by the geological record, but by the existing races of plants and animals. They have insisted that this evidence is not mere theory or imagination, but is drawn from a multitude of facts which become hopelessly unintelligible unless sufficient time is admitted for the evolution of geological history. They have not been able to disapprove the arguments of the physicists, but they have contended that the physicists have simply ignored the geological arguments as of no account in the discussion.

How have people come to be taken in by The Phenomenon of Man? Just as compulsory primary education created a market catered for by cheap dailies and weeklies, so the spread of secondary and latterly of tertiary education has created a large population of people, often with well-developed literary and scholarly tastes who have been educated far beyond their capacity to undertake analytical thought  [The Phenomenon of Man] is written in an all but totally unintelligible style, and this is construed as prima-facie evidence of profundity.

Medawars book review of The Phenomenon of Man by Teilhard de Chardin first appeared as 'Critical Notice' in the journal Mind (1961), 70, No. 277, 105. The book review was reprinted in The Art of the Soluble: Creativity and Originality in Science (1967).

If any philosopher had been asked for a definition of infinity, he might have produced some unintelligible rigmarole, but he would certainly not have been able to give a definition that had any meaning at all.

If it is true as Whewell says, that the essence of the triumphs of Science and its progress consists in that it enables us to consider evident and necessary, views which our ancestors held to be unintelligible and were unable to comprehend, then the extension of the number concept to include the irrational, and we will at once add, the imaginary, is the greatest forward step which pure mathematics has ever taken.

Metaphysics: An attempt to prove the incredible by an appeal to the unintelligible.

Obviously, what our age has in common with the age of the Reformation is the fallout of disintegrating values. What needs explaining is the presence of a receptive audience. More significant than the fact that poets write abstrusely, painters paint abstractly, and composers compose unintelligible music is that people should admire what they cannot understand; indeed, admire that which has no meaning or principle.

Physics tries to discover the pattern of events which controls the phenomena we observe. But we can never know what this pattern means or how it originates; and even if some superior intelligence were to tell us, we should find the explanation unintelligible.

In Physics And Philosophy: the Revolution In Modern Science (1942), 16.

To consider the matter aright, reason is nothing but a wonderful and unintelligible instinct in our souls, which carries us along a certain train of ideas, and endows them with particular qualities, according to their particular situations and relations. This instinct, 'tis true, arises from past observation and experience; but can anyone give the ultimate reason, why past experience and observation produces such an effect, any more than why nature alone should produce it?