Every teacher certainly should know something of non-euclidean geometry. Thus, it forms one of the few parts of mathematics which, at least in scattered catch-words, is talked about in wide circles, so that any teacher may be asked about it at any moment. ‚Ä¶ Imagine a teacher of physics who is unable to say anything about R√∂ntgen rays, or about radium. A teacher of mathematics who could give no answer to questions about non-euclidean geometry would not make a better impression.
On the other hand, I should like to advise emphatically against bringing non-euclidean into regular school instruction (i.e., beyond occasional suggestions, upon inquiry by interested pupils), as enthusiasts are always recommending. Let us be satisfied if the preceding advice is followed and if the pupils learn to really understand euclidean geometry. After all, it is in order for the teacher to know a little more than the average pupil.

A people that were to honor falsehood, defamation, fraud, and murder would be unable, indeed, to subsist for very long.

According to the theory of aerodynamics, as may be readily demonstrated through wind tunnel experiments, the bumblebee is unable to fly. This is because the size, weight and shape of his body in relation to the total wingspread make flying impossible. But the bumblebee, being ignorant of these scientific truths, goes ahead and flies anyway‚Äîand makes a little honey every day.

Every mathematician worthy of the name has experienced, if only rarely, the state of lucid exaltation in which one thought succeeds another as if miraculously‚Ä¶ this feeling may last for hours at a time, even for days. Once you have experienced it, you are eager to repeat it but unable to do it at will, unless perhaps by dogged work‚Ä¶.

Here I am at the limit which God and nature has assigned to my individuality. I am compelled to depend upon word, language and image in the most precise sense, and am wholly unable to operate in any manner whatever with symbols and numbers which are easily intelligible to the most highly gifted minds.

If it is true as Whewell says, that the essence of the triumphs of Science and its progress consists in that it enables us to consider evident and necessary, views which our ancestors held to be unintelligible and were unable to comprehend, then the extension of the number concept to include the irrational, and we will at once add, the imaginary, is the greatest forward step which pure mathematics has ever taken.

If one be bird-witted, that is easily distracted and unable to keep his attention as long as he should, mathematics provides a remedy; for in them if the mind be caught away but a moment, the demonstration has to be commenced anew.

In our days everything seems pregnant with its contrary. Machinery, gifted with the wonderful power of shortening and fructifying human labor, we behold starving and overworking it‚Ä¶ . At the same pace that mankind masters nature, man seems to become enslaved to other men or his own infamy. Even the pure light of science seems unable to shine but on the dark background of ignorance.

In the case of a Christian clergyman, the tragic-comical is found in this: that the Christian religion demands love from the faithful, even love for the enemy. This demand, because it is indeed superhuman, he is unable to fulfill. Thus intolerance and hatred ring through the oily words of the clergyman. The love, which on the Christian side is the basis for the conciliatory attempt towards Judaism is the same as the love of a child for a cake. That means that it contains the hope that the object of the love will be eaten up.

It is known that the mathematics prescribed for the high school [Gymnasien] is essentially Euclidean, while it is modern mathematics, the theory of functions and the infinitesimal calculus, which has secured for us an insight into the mechanism and laws of nature. Euclidean mathematics is indeed, a prerequisite for the theory of functions, but just as one, though he has learned the inflections of Latin nouns and verbs, will not thereby be enabled to read a Latin author much less to appreciate the beauties of a Horace, so Euclidean mathematics, that is the mathematics of the high school, is unable to unlock nature and her laws.

It must be borne in mind that the tragedy of life doesn‚Äôt lie in not reaching your goal. The tragedy lies in having no goal to reach. It isn‚Äôt a calamity to die with dreams unfulfilled, but it is a calamity not to dream. It is not a disaster to be unable to capture your idea, but it is disaster to have no idea to capture. It is not a disgrace not to reach for the stars, but it is a disgrace to have no stars to reach for. Not failure, but low aim is a sin.

Mathematics is the gate and key of the sciences. ... Neglect of mathematics works injury to all knowledge, since he who is ignorant of it cannot know the other sciences or the things of this world. And what is worse, men who are thus ignorant are unable to perceive their own ignorance and so do not seek a remedy.

Nature offers us a thousand simple pleasures‚Äîplays of light and color, fragrance in the air, the sun‚Äôs warmth on skin and muscle, the audible rhythm of life‚Äôs stir and push‚Äîfor the price of merely paying attention. What joy! But how unwilling or unable many of us are to pay this price in an age when manufactured sources of stimulation and pleasure are everywhere at hand. For me, enjoying nature‚Äôs pleasures takes conscious choice, a choice to slow down to seed time or rock time, to still the clamoring ego, to set aside plans and busyness, and to simply to be present in my body, to offer myself up.

Often referred to as osteoporosis of the ocean, [ocean acidification] prevents shell building creatures such as lobster, oyster, crab, shrimp, and coral from extracting the calcium carbonate from the water that they need to build their shells and are thus unable to survive. 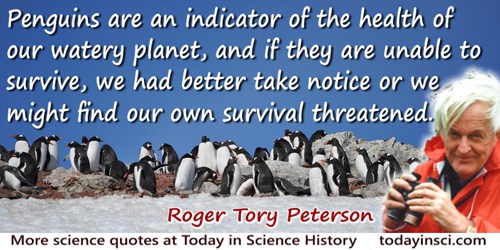 Penguins are an indicator of the health of our watery planet, and if they are unable to survive, we had better take notice or we might find our own survival threatened.

The moral attitudes of a people that is supported by religion need always aim at preserving and promoting the sanity and vitality of the community and its individuals, since otherwise this community is bound to perish. A people that were to honor falsehood, defamation, fraud, and murder would be unable, indeed, to subsist for very long.

The weeping philosopher too often impairs his eyesight by his woe, and becomes unable from his tears to see the remedies for the evils which he deplores. Thus it will often be found that the man of no tears is the truest philanthropist, as he is the best physician who wears a cheerful face, even in the worst of cases.

There is something sublime in the secrecy in which the really great deeds of the mathematician are done. No popular applause follows the act; neither contemporary nor succeeding generations of the people understand it. The geometer must be tried by his peers, and those who truly deserve the title of geometer or analyst have usually been unable to find so many as twelve living peers to form a jury. Archimedes so far outstripped his competitors in the race, that more than a thousand years elapsed before any man appeared, able to sit in judgment on his work, and to say how far he had really gone. And in judging of those men whose names are worthy of being mentioned in connection with his,‚ÄîGalileo, Descartes, Leibnitz, Newton, and the mathematicians created by Leibnitz and Newton‚Äôs calculus,‚Äîwe are forced to depend upon their testimony of one another. They are too far above our reach for us to judge of them.

We have become a people unable to comprehend the technology we invent.

[The National Academy of Sciences] would be unable to give a unanimous decision if asked whether the sun would rise tomorrow.

In David M. Rorvik, 'Ecology‚Äôs Angry Lobbyist: Dr. Paul Ehrlich Argues That the Chief Cause of Pollution Is Overpopulation', Look (21 Apr 1970). As quoted and cited in Columbia World of Quotations (1966).