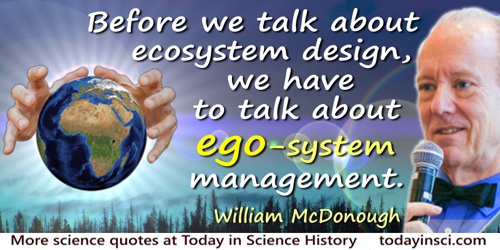 Dilbert: Maybe Im unlucky in love because Im so knowledgeable about science that I intimidate people. Their intimidation becomes low self-esteem, then they reject me to protect their egos.
Dogbert: Occams Razor.
Dilbert: What is Occam's Razor?
Dogbert: A guy named Occam had a rule about the world. Basically he said that when there are multiple explanations for something the simplest explanation is usually correct. The simplest explanation for your poor love life is that youre immensely unattractive.
Dilbert: Maybe Occam had another rule that specifically exempted this situation, but his house burned down with all his notes. Then he forgot.
Dogbert: Occams Razor.
Dilbert: Im an idiot.
Dogbert: I dont think we can rule it out at this point.

Ego cogito, ergo sum.
I think, therefore I am.

From the original Latin in Principia Philosophiæ (1644), Pars Prima, as collected in Charles Adam and Paul Tannery, uvres de Descartes (1905), Vol. 8, Proposition VII, 7. English version as given in John Veitch (trans.), The Method, Meditations, and Selections from the Principles of Descartes (1880), 195.

In the course of centuries the naïve self-love of men has had to submit to two major blows at the hands of science. The first was when they learnt that our earth was not the centre of the universe but only a tiny fragment of a cosmic system of scarcely imaginable vastness... the second blow fell when biological research destroyed man's supposedly privileged place in creation and proved his descent from the animal kingdom and his ineradicable animal nature But human megalomania will have suffered its third and most wounding blow from the psychological research of the present time which seeks to prove to the ego that it is not even master in its own house, but must content itself with scanty information of what is going on unconsciously in its mind.

Man is not only part of a field, but a part and member of his group. When people are together, as when they are at work, then the most unnatural behavior, which only appears in late stages or abnormal cases, would be to behave as separate Egos. Under normal circumstances they work in common, each a meaningfully functioning part of the whole.

Nirvana is a state of pure blissful knowledge ... It has nothing to do with the individual. The ego or its separation is an illusion. Indeed in a certain sense two Is are identical namely when one disregards all special contentstheir Karma. The goal of man is to preserve his Karma and to develop it further ... when man dies his Karma lives and creates for itself another carrier.

One may understand the cosmos, but never the ego; the self is more distant than any star.

The dream is a little hidden door in the innermost and most secret recesses of the psyche, opening into the cosmic night which was psyche long before there was any ego-consciousness, and which will remain psyche no matter how far our ego-consciousness may extend. 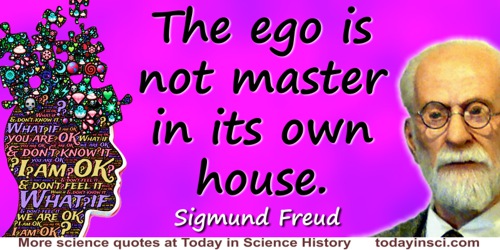 The ego is not master in its own house.

They tend to be suspicious, bristly, paranoid-type people with huge egos they push around like some elephantiasis victim with his distended testicles in a wheelbarrow terrified no doubt that some skulking ingrate of a clone student will sneak into his very brain and steal his genius work.

To be great, a surgeon must have a fierce determination to be the leader in his field. He must have a driving ego, a hunger beyond money. He must have a passion for perfectionism. He is like the actor who wants his name in lights.

We wanted to fly. We also had such big egos that we felt that we could fly the crates they shipped these things in. We honestly felt that, with things that were wrong, we always had a mental workaround on them.

Where id was, there ego shall be.

You cant have a big ego and be a great inventor. You constantly have to be listening and evaluating.