As pure truth is the polar star of our science [mathematics], so it is the great advantage of our science over others that it awakens more easily the love of truth in our pupils.  If Hegel justly said, Whoever does not know the works of the ancients, has lived without knowing beauty, Schellbach responds with equal right, Who does not know mathematics, and the results of recent scientific investigation, dies without knowing truth.

Finally, since I thought that we could have all the same thoughts, while asleep, as we have while we are awake, although none of them is true at that time, I decided to pretend that nothing that ever entered my mind was any more true than the illusions of my dreams. But I noticed, immediately afterwards, that while I thus wished to think that everything was false, it was necessarily the case that I, who was thinking this, was something. When I noticed that this truth I think, therefore I am was so firm and certain that all the most extravagant assumptions of the sceptics were unable to shake it, I judged that I could accept it without scruple as the first principle of the philosophy for which I was searching. Then, when I was examining what I was, I realized that I could pretend that I had no body, and that there was no world nor any place in which I was present, but I could not pretend in the same way that I did not exist. On the contrary, from the very fact that I was thinking of doubting the truth of other things, it followed very evidently and very certainly that I existed; whereas if I merely ceased to think, even if all the rest of what I had ever imagined were true, I would have no reason to believe that I existed. I knew from this that I was a substance, the whole essence or nature of which was to think and which, in order to exist, has no need of any place and does not depend on anything material. Thus this selfthat is, the soul by which I am what I amis completely distinct from the body and is even easier to know than it, and even if the body did not exist the soul would still be everything that it is.

Gather, ye nations, gather!
From forge, and mine, and mill!
Come, Science and Invention;
Come, Industry and Skill!

From poem, 'The Festival of Labour' (1851), collected in The Poetical Works of Charles Mackay: Now for the First Time Collected Complete in One Volume (1876), 539. Written for the opening of the Great Exhibition.

I heard  xenon was a good anesthesia.  I thought, How can xenon, which doesnt form any chemical compounds, serve as a general anesthetic?  I lay awake at night for a few minutes before going to sleep, and during the next couple of weeks each night I would think, how do anesthetic agents work?" Then I forgot to do it after a while, but Id trained my unconscious mind to keep this question alive and to call [it] to my consciousness whenever a new idea turned up. So seven years went by. [One day I] put my feet up on the desk and started reading my mail, and here was a letter from George Jeffrey  an x-ray crystallographer, on his determination of the structure of a hydrate crystal. Immediately I sat up, took my feet off the desk, and said, I understand anesthesia!  I spent a year [and] determined the structure of chloroform hydrate, and then I wrote my paper published in June of 1961.

I like a deep and difficult investigation when I happen to have made it easy to myself, if not to all others; and there is a spirit of gambling in this, whether, as by the cast of a die, a calculation è perte de vue shall bring out a beautiful and perfect result or shall be wholly thrown away. Scientific investigations are a sort of warfare carried on in the closet or on the couch against all one's contemporaries and predecessors; I have often gained a signal victory when I have been half asleep, but more frequently have found, upon being thoroughly awake, that the enemy had still the advantage of me, when I thought I had him fast in a corner, and all this you see keeps me alive.

I spend a great deal of the hours that Im awake within myself. You never want to stop doing it, especially when its a pleasure. Its vital to my existence and I couldnt live if I wasnt an inventor.

It is not improbable that some of the presentations which come before the mind in sleep may even be causes of the actions cognate to each of them. For as when we are about to act [in waking hours], or are engaged in any course of action, or have already performed certain actions, we often find ourselves concerned with these actions, or performing them, in a vivid dream.

In Mortimer Jerome Adler, Charles Lincoln Van Doren (eds.) Great Treasury of Western Thought: A Compendium of Important Statements on Man and His Institutions by the Great Thinkers in Western History (1977), 352

It took Galileo 16 years to master the universe. You have one night. It seems unfair. The genius had all that time. While you have a few short hours to learn sun spots from your satellites before the dreaded astronomy exam. On the other hand, Vivarin [caffeine tablets] help you keep awake and mentally alert So even when the subject matters dull, your mind will remain razor sharp. If Galileo had used Vivarin, maybe he could have mastered the solar system faster, too.

Observation is so wide awake, and facts are being so rapidly added to the sum of human experience, that it appears as if the theorizer would always be in arrears, and were doomed forever to arrive at imperfect conclusion; but the power to perceive a law is equally rare in all ages of the world, and depends but little on the number of facts observed.

The chairs and tables around us which broadcast to us incessantly those signals which affect our sight and touch cannot in their nature be like unto the signals or to the sensations which the signals awake at the end of their journey.

The sun-awakened avalanche! whose mass,
Thrice sifted by the storm, had gathered there
Flake after flake, in heaven-defying minds
As thought by thought is piled, till some great truth
Is loosened, and the nations echo round,
Shaken to their roots, as do the mountains now.

Thought once awakened does not again slumber; unfolds itself into a System of Thought; grows, in man after man, generation after generation,till its full stature is reached, and such System of Thought can grow no farther, and must give place to another.

Time is awake when all things sleep.
Time stands straight when all things fall.
Time shuts in all and will not be shut.
Is, was, and shall be are Times children.
O Reason! be witness! be stable!

What struck me most in England was the perception that only those works which have a practical tendency awake attention and command respect, while the purely scientific, which possess far greater merit are almost unknown. And yet the latter are the proper source from which the others flow. Practice alone can never lead to the discovery of a truth or a principle. In Germany it is quite the contrary. Here in the eyes of scientific men no value, or at least but a trifling one, is placed upon the practical results. The enrichment of science is alone considered worthy attention.

When important decisions have to be taken, the natural anxiety to come to a right decision will often keep us awake. Nothing, however, is more conducive to healthful sleep than plenty of open air. 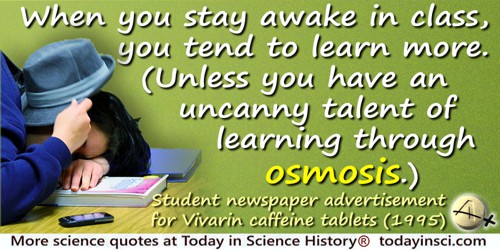 When you stay awake in class, you tend to learn more. (Unless you have an uncanny talent of learning through osmosis.)

Why does the eye see a thing more clearly in dreams than the imagination when awake?