At the Egyptian city of Naucratis there was a famous old god whose name was Theuth; the bird which is called the Ibis was sacred to him, and he was the inventor of many arts, such as arithmetic and calculation and geometry and astronomy and draughts and dice, but his great discovery was the use of letters.

In the Phaedrus. Collected in Plato the Teacher (1897), 171. A footnote gives that Naucratis was a city in the Delta of Egypt, on a branch of the Nile.

By these pleasures it is permitted to relax the mind with play, in turmoils of the mind, or when our labors are light, or in great tension, or as a method of passing the time. A reliable witness is Cicero, when he says (De Oratore, 2): 'men who are accustomed to hard daily toil, when by reason of the weather they are kept from their work, betake themselves to playing with a ball, or with knucklebones or with dice, or they may also contrive for themselves some new game at their leisure.' 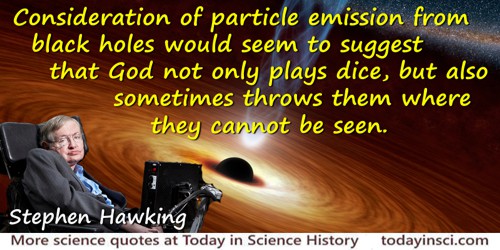 Consideration of particle emission from black holes would seem to suggest that God not only plays dice, but also sometimes throws them where they cannot be seen.

Einstein never accepted quantum mechanics because of this element of chance and uncertainty. He said: God does not play dice. It seems that Einstein was doubly wrong. The quantum effects of black holes suggests that not only does God play dice, He sometimes throws them where they cannot be seen.

Einstein was wrong when he said, 'God does not play dice'. Consideration of black holes suggests, not only that God does play dice, but that he sometimes confuses us by throwing them where they can't be seen.

God not only plays dice. He also sometimes throws the dice where they cannot be seen.

God plays dice with the universe, but theyre loaded dice. And the main objective of physics now is to find out by what rules were they loaded and how can we use them for our own ends.

I like a deep and difficult investigation when I happen to have made it easy to myself, if not to all others; and there is a spirit of gambling in this, whether, as by the cast of a die, a calculation è perte de vue shall bring out a beautiful and perfect result or shall be wholly thrown away. Scientific investigations are a sort of warfare carried on in the closet or on the couch against all one's contemporaries and predecessors; I have often gained a signal victory when I have been half asleep, but more frequently have found, upon being thoroughly awake, that the enemy had still the advantage of me, when I thought I had him fast in a corner, and all this you see keeps me alive.

If the world may be thought of as a certain definite quantity of force and as a certain definite number of centers of force—and every other representation remains indefinite and therefore useless—it follows that, in the great dice game of existence, it must pass through calculable number of combinations. In infinite time, every possible combination would at some time or another be realized; more: it would be realized an infinite number of times. And since between every combination and its next recurrence all other possible combinations would have to take place, and each of these combination conditions of the entire sequence of combinations in the same series, a circular movement of absolutely identical series is thus demonstrated: the world as a circular movement that has already repeated itself infinitely often and plays its game in infinitum. This conception is not simply a mechanistic conception; for if it were that, it would not condition an infinite recurrence of identical cases, but a final state. Because the world has not reached this, mechanistic theory must be considered an imperfect and merely provisional hypothesis.

It is hard to sneak a look at Gods cards. But that he would choose to play dice with the world  is something I cannot believe for a single moment.

On quantum theory. In Letter (21 Mar 1942) to his student-colleague, Cornel Lanczos. In Yale Book of Quotations (2006), 229. Also seen paraphrased as, I cannot believe that God would choose to play dice with the universe.

Neither in the subjective nor in the objective world can we find a criterion for the reality of the number concept, because the first contains no such concept, and the second contains nothing that is free from the concept. How then can we arrive at a criterion? Not by evidence, for the dice of evidence are loaded. Not by logic, for logic has no existence independent of mathematics: it is only one phase of this multiplied necessity that we call mathematics.
How then shall mathematical concepts be judged? They shall not be judged. Mathematics is the supreme arbiter. From its decisions there is no appeal. We cannot change the rules of the game, we cannot ascertain whether the game is fair. We can only study the player at his game; not, however, with the detached attitude of a bystander, for we are watching our own minds at play.

In Number: The Language of Science; a Critical Survey Written for the Cultured Non-Mathematician (1937), 244-245.

Quantum mechanics is certainly imposing. But an inner voice tells me that this is not yet the real thing. The theory says a lot, but does not bring us any closer to the secrets of the Old One. I, at any rate, am convinced that He is not playing at dice.

Quantum mechanics is very imposing.  I, at any rate, am convinced that He [God] is not playing at dice.

The dice of God are always loaded.
[A fragment from a lost play of Sophocles, Ever the dice of Zeus fall well.]

A colloquial translation, presumably ironic, from the original Greek phrase (preceding it), as given in 'Compensation', collected in The Complete Works of Ralph Waldo Emerson (1903), 102. The more literal translation of the original Greek is discussed in the added Notes section by Joseph Slater in The Collected Works of Ralph Waldo Emerson: First Series, Essays (1979), 234. Fragment translation from Paul Shorey, 'The Influence of Classics on American Literature', The Chautauquan (1906), 43, 129.

The picture of scientific method drafted by modern philosophy is very different from traditional conceptions. Gone is the ideal of a universe whose course follows strict rules, a predetermined cosmos that unwinds itself like an unwinding clock. Gone is the ideal of the scientist who knows the absolute truth. The happenings of nature are like rolling dice rather than like revolving stars; they are controlled by probability laws, not by causality, and the scientist resembles a gambler more than a prophet. He can tell you only his best positshe never knows beforehand whether they will come true. He is a better gambler, though, than the man at the green table, because his statistical methods are superior. And his goal is staked higherthe goal of foretelling the rolling dice of the cosmos. If he is asked why he follows his methods, with what title he makes his predictions, he cannot answer that he has an irrefutable knowledge of the future; he can only lay his best bets. But he can prove that they are best bets, that making them is the best he can doand if a man does his best, what else can you ask of him?

These duplicates in those parts of the body, without which a man might have very well subsisted, though not so well as with them, are a plain demonstration of an all-wise Contriver, as those more numerous copyings which are found among the vessels of the same body are evident demonstrations that they could not be the work of chance. This argument receives additional strength if we apply it to every animal and insect within our knowledge, as well as to those numberless living creatures that are objects too minute for a human eye: and if we consider how the several species in this whole world of life resemble one another in very many particulars, so far as is convenient for their respective states of existence, it is much more probable that a hundred millions of dice should be casually thrown a hundred millions of times in the same number than that the body of any single animal should be produced by the fortuitous concourse of matter.

Unlike any creature that lived before, humans have become a geophysical force, swiftly changing the atmosphere and climate as well as the composition of the worlds fauna and flora.  Darwins dice have rolled badly for Earth.

We believe in the possibility of a theory which is able to give a complete description of reality, the laws of which establish relations between the things themselves and not merely between their probabilities ... God does not play dice.

You believe in the God who plays dice, and I in complete law and order in a world that objectively exists, and which I, in a wildly speculative way, am trying to capture.  Even the great initial success of the quantum theory does not make me believe in the fundamental dice-game, although I am well aware that our younger colleagues interpret this as a consequence of senility. No doubt the day will come when we will see whose instinctive attitude was the correct one.