1122 ‚Ä¶ Thereafter there were many sailors on the sea and on inland water who said that they had seen a great and extensive fire near the ground in the northeast which continuously increased in width as it mounted to the sky. And the heavens opened into four parts and fought against it as if determined to put it out, and the fire stopped rising upwards. They saw that fire at the first streak of dawn, and it lasted until full daylight: this happened on 7 December.

Qui ergo munitam vult habere navem habet etiam acum jaculo suppositam. Rotabitur enim et circumvolvetur acus, donec cuspis acus respiciat orientem sicque comprehendunt quo tendere debeant nautaw cum Cynosura latet in aeris turbatione; quamvis ad occasum numquam tendat, propter circuli brevitatem.
If then one wishes a ship well provided with all things, then one must have also a needle mounted on a dart. The needle will be oscillated and turn until the point of the needle directs itself to the East* [North], thus making known to sailors the route which they should hold while the Little Bear is concealed from them by the vicissitudes of the atmosphere; for it never disappears under the horizon because of the smallness of the circle it describes.

Latin text from Thomas Wright, 'De Utensilibus', A Volume of Vocabularies, (1857) as cited with translation in Park Benjamin, The Intellectual Rise in Electricity: A History (1895), 129.

Even now, the imprisoned winds which the earliest poet made the Grecian warrior bear for the protection of his fragile bark; or those which, in more modern times, the Lapland wizards sold to the deluded sailors;‚Äîthese, the unreal creations of fancy or of fraud, called, at the command of science, from their shadowy existence, obey a holier spell: and the unruly masters of the poet and the seer become the obedient slaves of civilized man.

Exact science and its practical movements are no checks on the greatest poet, but always his encouragement and support ‚Ä¶ The sailor and traveller, the anatomist, chemist, astronomer, geologist, phrenologist, spiritualist, mathematician, historian and lexicographer are not poets, but they are the lawgivers of poets and their construction underlies the structure of every perfect poem.

In Walt Whitman and William Michael Rossetti (ed.), 'Preface to the First Edition of Leaves of Grass', Poems By Walt Whitman (1868), 46. 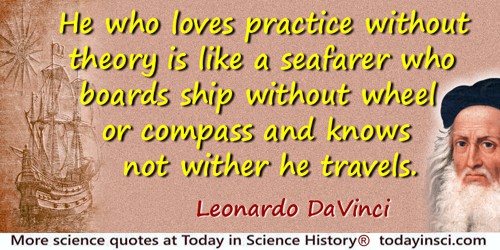 He who loves practice without theory is like a seafarer who boards ship without wheel or compass and knows not wither he travels.

His mind illumined the Past and the Future and wrought greatly for the present. By his genius distant lands converse and men sail unafraid upon the deep.

Inscription on the tomb of Reginald and Helen Fessenden in Bermuda. In Frederick Seitz, The Cosmic Inventor: Reginald Aubrey Fessenden (1866-1932) (1999), 61, being Transactions of the American Philosophical Society, Held at Philadelphia For Promoting Useful Knowledge, Vol. 86, Pt. 6.

However baby man may brag of his science and skill, and however much, in a flattering future, that science and skill may augment; yet for ever and for ever, to the crack of doom, the sea will insult and murder him, and pulverise the stateliest, stiffest frigate he can make; nevertheless, by the continual repetition of these very impressions, man has lost that sense of the full awfulness of the sea which aboriginally belongs to it.

It is not easy to name another Voyager or Traveller who has given more useful information to the world; to whom the Merchant and Mariner are so much indebted; or who has communicated his information in a more unembarrassed and intelligible manner. And this he has done in a style perfectly unassuming, equally free from affectation and from the most distant appearance of invention.

Describing Captain William Dampier in A Chronological History of the Voyages and Discoveries in the South Sea or Pacific Ocean: Vol. 4(1816), 486. [A similar quote found on the web is ‚ÄúIt is not easy to name another sailor who has supplied such valuable information to the world; he had a passion for reporting exactly as he saw it, with a delicate and perfect style; he felt an unending curiosity that made his accounts have a unique delicate touch.‚Äù For this, Webmaster has so far not identified it in a primary source by Burney. Please contact if you know it. ‚ÄîWebmaster.]

March 24, 1672. I saw the surgeon cut off the leg of a wounded sailor, the stout and gallant man enduring it with incredible patience without being bound to his chair as usual on such painful occasions. I had hardly courage enough to be present. Not being cut off high enough, the gangrene prevailed, and the second operation cost the poor creature his life.

See with what entire freedom the whaleman takes his handful of lamps‚Äîoften but old bottles and vials, though. ‚Ä¶ He burns, too, the purest of oil. ‚Ä¶ It is sweet as early grass butter in April. He goes and hunts for his oil, so as to be sure of its freshness and genuineness, even as the traveler on the prairie hunts up his own supper of game.

The mathematician can afford to leave to his clients, the engineers, or perhaps the popular philosophers, the emotion of belief: for himself he keeps the lyrical pleasure of metre and of evolving equations: and it is a pleasant surprise to him and an added problem if he finds that the arts can use his calculations, or that the senses can verify them, much as if a composer found that sailors could heave better when singing his songs.

The morning was hardly propitious
When sailors discovered Mauritius
They killed off the lot Stewed them up in a pot
And pronounced them extinct, but delicious.

The role of hypothesis in research can be discussed more effectively if we consider first some examples of discoveries which originated from hypotheses. One of the best illustrations of such a discovery is provided by the story of Christopher Columbus‚Äô voyage; it has many of the features of a classic discovery in science. (a) He was obsessed with an idea‚Äîthat since the world is round he could reach the Orient by sailing West, (b) the idea was by no means original, but evidently he had obtained some additional evidence from a sailor blown off his course who claimed to have reached land in the west and returned, (c) he met great difficulties in getting someone to provide the money to enable him to test his idea as well as in the actual carrying out of the experimental voyage, (d) when finally he succeeded he did not find the expected new route, but instead found a whole new world, (e) despite all evidence to the contrary he clung to the bitter end to his hypothesis and believed that he had found the route to the Orient, (f) he got little credit or reward during his lifetime and neither he nor others realised the full implications of his discovery, (g) since his time evidence has been brought forward showing that he was by no means the first European to reach America.

The Royal Navy‚Äôs unique ability to combat scurvy was said by one naval physician to have doubled its performance and contributed directly to Britain‚Äôs eventual defeat of the French and Spanish fleets at Trafalgar in 1805. (It also meant that British sailors became known as ‚Äúlimeys.‚Äù)

To me the sea is a continual miracle,
The fishes that swim‚Äîthe rocks‚Äîthe motion of the waves‚Äî the ships with men in them,
What stranger miracles are there?

We intend to say something about the structure of the atom but lack a language in which we can make ourselves understood. We are in much the same position as a sailor, marooned on a remote island where conditions differ radically from anything he has ever known and where, to make things worse, the natives speak a completely alien tongue.

In conversation during first meeting with Werner Heisenberg (summer 1920), as quoted in William H. Cropper, Great Physicists: The Life and Times of Leading Physicists from Galileo to Hawking (2001), 249-250.

‚ÄúThe Ancient Mariner‚Äù ‚Äî This poem would not have taken so well if it had been called ‚ÄúThe Old Sailor,‚Äù so that Wardour Street has its uses.

Samuel Butler, Henry Festing Jones (ed.), The Note-Books of Samuel Butler (1917), 229. Note: ‚ÄúWardour Street prose‚Äù implies the use of near-obsolete words for effect, and derives from former times when the street was known for its many antique shops.