But how is one to determine what is pleasing to God? ... Whatever is unpleasant to man is pleasant to God. The test is the natural instinct of man. If there arises within ones dark recesses a hot desire to do this or that, then it is the paramount duty of a Christian to avoid doing this or that. And if, on the contrary, one cherishes an abhorrence of the business, then one must tackle it forthwith, all the time shouting Hallelujah! A simple enough religion, surelysimple, satisfying and idiotic.

Enhydros is a variety of geode. The name comes from the water it contains. It is always round, smooth, and very white but will sway back and forth when moved. Inside it is a liquid just as in an egg, as Pliny, our Albertus, and others believed, and it may even drip water. Liquid bitumen, sometimes with a pleasant odor, is found enclosed in rock just as in a vase.

As translated by Mark Chance Bandy and Jean A. Bandy from the first Latin Edition of 1546 in De Natura Fossilium: (Textbook of Mineralogy) (2004), 104. Originally published by Geological Society of America as a Special Paper (1955). There are other translations with different wording.

Experience hobbles progress and leads to abandonment of difficult problems; it encourages the initiated to walk on the shady side of the street in the direction of experiences that have been pleasant. Youth without experience attacks the unsolved problems which maturer age with experience avoids, and from the labors of youth comes progress. Youth has dreams and visions, and will not be denied.

I always love geology. In winter, particularly, it is pleasant to listen to theories about the great mountains one visited in the summer; or about the Flood or volcanoes; about great catastrophes or about blisters; above all about fossils  Everywhere there are hypotheses, but nowhere truths; many workmen, but no experts; priests, but no God. In these circumstances each man can bring his hypothesis like a candle to a burning altar, and on seeing his candle lit declare Smoke for smoke, sir, mine is better than yours. It is precisely for this reason that I love geology.

I have a friendly feeling towards pigs generally, and consider them the most intelligent of beasts, not excepting the elephant and the anthropoid apethe dog is not to be mentioned in this connection. I also like his disposition and attitude towards all other creatures, especially man. He is not suspicious, or shrinkingly submissive, like horses, cattle, and sheep; nor an impudent devil-may-care like the goat; nor hostile like the goose; nor condescending like the cat; nor a flattering parasite like the dog. He views us from a totally different, a sort of democratic, standpoint as fellow-citizens and brothers, and takes it for granted, or grunted, that we understand his language, and without servility or insolence he has a natural, pleasant, camerados-all or hail-fellow-well-met air with us.

It is not merely as an investigator and discoverer, but as a high-principled and unassuming man, that Scheele merits our warmest admiration. His aim and object was the discovery of truth. The letters of the man reveal to us in the most pleasant way his high scientific ideal, his genuinely philosophic temper, and his simple mode of thought. It is the truth alone that we desire to know, and what joy there is in discovering it! With these words he himself characterizes his own efforts.

It is obvious that man dwells in a splendid universe, a magnificent expanse of earth and sky and heaven, which manifestly is built on a majestic plan, maintains some mighty design, though man himself cannot grasp it. Yet for him it is not a pleasant or satisfying world. In his few moments of respite from labor or from his enemies, he dreams that this very universe might indeed be perfect, its laws operating just as now they seem to do, and yet he and it somehow be in full accord. The very ease with which he can frame this image to himself makes the reality all the more mocking. ... It is only too clear that man is not at home in this universe, and yet he is not good enough to deserve a better.

It is so easy to believe in pleasant impossibilities.

Aphorism as given by the fictional character Dezhnev Senior, in Fantastic Voyage II: Destination Brain (1987), 71.

Marly 30 July 1705. From all I hear of Leibniz he must be very intelligent, and pleasant company in consequence. It is rare to find learned men who are clean, do not stink and have a sense of humour.

Science which is acquired unwillingly, soon disappears; that which is instilled into the mind in a pleasant and agreeable manner, is more lasting. 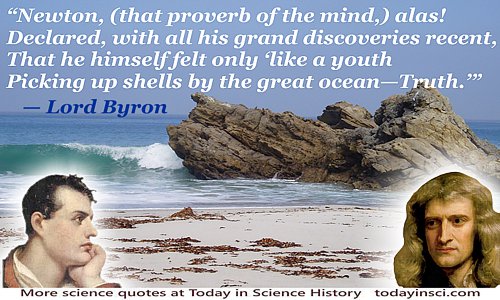 The history of science should not be an instrument to defend any kind of social or philosophic theory; it should be used only for its own purpose, to illustrate impartially the working of reason against unreason, the gradual unfolding of truth, in all its forms, whether pleasant or unpleasant, useful of useless, welcome or unwelcome.

In A History of Science: Volume 1: Ancient Science Through the Golden Age of Greece (1952), xiv.

The mathematician can afford to leave to his clients, the engineers, or perhaps the popular philosophers, the emotion of belief: for himself he keeps the lyrical pleasure of metre and of evolving equations: and it is a pleasant surprise to him and an added problem if he finds that the arts can use his calculations, or that the senses can verify them, much as if a composer found that sailors could heave better when singing his songs.

The power that produced Man when the monkey was not up to the mark, can produce a higher creature than Man if Man does not come up to the mark. What it means is that if Man is to be saved, Man must save himself. There seems no compelling reason why he should be saved. He is by no means an ideal creature. At his present best many of his ways are so unpleasant that they are unmentionable in polite society, and so painful that he is compelled to pretend that pain is often a good. Nature holds no brief for the human experiment: it must stand or fall by its results. If Man will not serve, Nature will try another experiment.

Back to Methuselah: a Metabiological Pentateuch (1921), xvii.

To awaken quite alone in a strange town is one of the pleasantest sensations in the world.

Upon the whole, Chymistry is as yet but an opening science, closely connected with the usefull and ornamental arts, and worthy the attention of the liberal mind. And it must always become more and more so: for though it is only of late, that it has been looked upon in that light, the great progress already made in Chymical knowledge, gives us a pleasant prospect of rich additions to it. The Science is now studied on solid and rational grounds. While our knowledge is imperfect, it is apt to run into error: but Experiment is the thread that will lead us out of the labyrinth.

We all know, from what we experience with and within ourselves, that our conscious acts spring from our desires and our fears. Intuition tells us that that is true also of our fellows and of the higher animals. We all try to escape pain and death, while we seek what is pleasant. We are all ruled in what we do by impulses; and these impulses are so organized that our actions in general serve for our self preservation and that of the race. Hunger, love, pain, fear are some of those inner forces which rule the individuals instinct for self preservation. At the same time, as social beings, we are moved in the relations with our fellow beings by such feelings as sympathy, pride, hate, need for power, pity, and so on. All these primary impulses, not easily described in words, are the springs of mans actions. All such action would cease if those powerful elemental forces were to cease stirring within us. Though our conduct seems so very different from that of the higher animals, the primary instincts are much alike in them and in us. The most evident difference springs from the important part which is played in man by a relatively strong power of imagination and by the capacity to think, aided as it is by language and other symbolical devices. Thought is the organizing factor in man, intersected between the causal primary instincts and the resulting actions. In that way imagination and intelligence enter into our existence in the part of servants of the primary instincts. But their intervention makes our acts to serve ever less merely the immediate claims of our instincts.

When coming to close quarters with a skunk  one has to fear from an encounter; the worst is that effluvium, after which crushed garlic is lavender, which tortures the olfactory nerves, and appears to pervade the whole system like a pestilent ether, nauseating one until sea-sickness seems almost a pleasant sensation in comparison.