A Miracle is a Violation of the Laws of Nature; and as a firm and unalterable Experience has established these Laws, the Proof against a Miracle, from the very Nature of the Fact, is as entire as any Argument from Experience can possibly be imagined. Why is it more than probable, that all Men must die; that Lead cannot, of itself, remain suspended in the Air; that Fire consumes Wood, and is extinguished by Water; unless it be, that these Events are found agreeable to the Laws of Nature, and there is required a Violation of these Laws, or in other Words, a Miracle to prevent them? Nothing is esteem'd a Miracle, if it ever happen in the common Course of Nature... There must, therefore, be a uniform Experience against every miraculous Event, otherwise the Event would not merit that Appellation. And as a uniform Experience amounts to a Proof, there is here a direct and full Proof, from the Nature of the Fact, against the Existence of any Miracle; nor can such a Proof be destroy'd, or the Miracle render'd credible, but by an opposite Proof, which is superior.

A nose which varies from the ideal of straightness to a hook or snub may still be of good shape and agreeable to the eye. 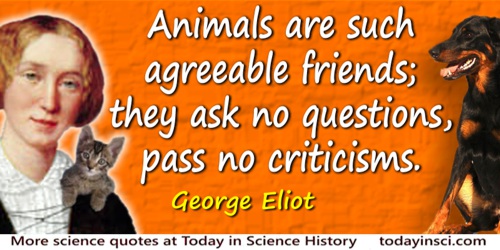 Animals are such agreeable friends; they ask no questions, pass no criticisms.

As to what Simplicius said last, that to contend whether the parts of the Sun, Moon, or other celestial body, separated from their whole, should naturally return to it, is a vanity, for that the case is impossible, it being clear by the demonstrations of Aristotle that the celestial bodies are impassible, impenetrable, unpartable, etc., I answer that none of the conditions whereby Aristotle distinguishes the celestial bodies from the elementary has any foundation other than what he deduces from the diversity of their natural motions; so that, if it is denied that the circular motion is peculiar to celestial bodies, and affirmed instead that it is agreeable to all naturally moveable bodies, one is led by necessary confidence to say either that the attributes of generated or ungenerated, alterable or unalterable, partable or unpartable, etc., equally and commonly apply to all bodies, as well to the celestial as to the elementary, or that Aristotle has badly and erroneously deduced those from the circular motion which he has assigned to celestial bodies.

Chagrined a little that we have been hitherto able to produce nothing in this way of use to mankind; and the hot weather coming on, when electrical experiments are not so agreeable, it is proposed to put an end to them for this season, somewhat humorously, in a party of pleasure, on the banks of Skuylkil. Spirits, at the same time, are to be fired by a spark sent from side to side through the river, without any other conductor that the water; an experiment which we some time since performed, to the amazement of many. A turkey is to be killed for our dinner by the electrified bottle: when the healths of all the famous electricians in England, Holland, France, and Germany are to be drank in electrified bumpers, under the discharge of guns from the electrical battery.

Facts are to the mind the same thing as food to the body. On the due digestion of facts depends the strength and wisdom of the one, just as vigor and health depend on the other. The wisest in council, the ablest in debate, and the most agreeable in the commerce of life is that man who has assimilated to his understanding the greatest number of facts.

Finally, I aim at giving denominations to things, as agreeable to truth as possible. I am not ignorant that words, like money, possess an ideal value, and that great danger of confusion may be apprehended from a change of names; in the mean time it cannot be denied that chemistry, like the other sciences, was formerly filled with improper names. In different branches of knowledge, we see those matters long since reformed: why then should chemistry, which examines the real nature of things, still adopt vague names, which suggest false ideas, and favour strongly of ignorance and imposition? Besides, there is little doubt but that many corrections may be made without any inconvenience.

Histology is an exotic meal, but can be as repulsive as a dose of medicine for students who are obliged to study it, and little loved by doctors who have finished their study of it all too hastily. Taken compulsorily in large doses it is impossible to digest, but after repeated tastings in small draughts it becomes completely agreeable and even addictive. Whoever possesses a refined sensitivity for artistic manifestations will appreciate that, in the science of histology, there exists an inherent focus of aesthetic emotions.

I was introduced to Mr. Davy, who has rooms adjoining mine (in the Royal Institution); he is a very agreeable and intelligent young man, and we have interesting conversation in an evening; the principal failing in his character as a philosopher is that he does not smoke.

If a child left school at ten, knowing nothing of detailed information, but knowing the pleasure that comes from agreeable music, from reading, from making things, from finding things out, it would be better off than a man who left university at twenty-two, full of facts but without any desire to enquire further into such dry domains.

My thoughts  are like persons met upon a journey; I think them very agreeable at first but soon find, as a rule, that I am tired of them.

Reflexion is careful and laborious thought, and watchful attention directed to the agreeable effect of ones plan. Invention, on the other hand, is the solving of intricate problems and the discovery of new principles by means of brilliancy and versatility.

Science which is acquired unwillingly, soon disappears; that which is instilled into the mind in a pleasant and agreeable manner, is more lasting.

The history of mathematics may be instructive as well as agreeable; it may not only remind us of what we have, but may also teach us to increase our store. Says De Morgan, The early history of the mind of men with regards to mathematics leads us to point out our own errors; and in this respect it is well to pay attention to the history of mathematics. It warns us against hasty conclusions; it points out the importance of a good notation upon the progress of the science; it discourages excessive specialization on the part of the investigator, by showing how apparently distinct branches have been found to possess unexpected connecting links; it saves the student from wasting time and energy upon problems which were, perhaps, solved long since; it discourages him from attacking an unsolved problem by the same method which has led other mathematicians to failure; it teaches that fortifications can be taken by other ways than by direct attack, that when repulsed from a direct assault it is well to reconnoiter and occupy the surrounding ground and to discover the secret paths by which the apparently unconquerable position can be taken.

The human understanding when it has once adopted an opinion (either as being the received opinion or as being agreeable to itself) draws all things else to support and agree with it. And though there be a greater number and weight of instances to be found on the other side, yet these it either neglects and despises, or else by some distinction sets aside and rejects, in order that by this great and pernicious predetermination the authority of its former conclusions may remain inviolate.

To be always poring over the same Object, dulls the Intellects and tires the Mind, which is delighted and improved by a Variety: and therefore it ought, at times, to be relaxed from the more severe mathematical Contemplations, and to be employed upon something more light and agreeable, as Poetry, Physic, History, &c

We must raise the salaries of our operators or they will all be taken from us, that is, all that are good for anything. You will recollect that, at the first meeting of the Board of Directors, I took the ground that 'it was our policy to make the office of operator desirable, to pay operators well and make their situation so agreeable that intelligent men and men of character will seek the place and dread to lose it.' I still think so, and, depend upon it, it is the soundest economy to act on this principle.

What is common sense? That which attracts the least opposition: that which brings most agreeable and worthy results