From paper read at the Section on State Medicine and Public Hygiene of the State Medical Association of Texas at El Paso (11 May 1922), 'The Use Of Scopolamine In Criminology', published in Texas State Journal of Medicine (Sep 1922). Reprinted in The American Journal of Police Science (Jul-Aug 1931), 2, No. 4, 328.

A university should be a place of light, of liberty, and of learning.

At their best, at their most creative, science and engineering are attributes of libertynoble expressions of mans God-given right to investigate and explore the universe without fear of social or political or religious reprisals.

From 'Sarnoff Honored by I.R.E.', in Department of Information of the Radio Corporation of America, Radio Age: Research, Manufacturing, Communications, Broadcasting (Apr 1953), 12, No. 2, 32.

Becoming serious is a grievous fault in hobbyists. It is an axiom that no hobby should either seek or need rational justification. To wish to do it is reason enough. To find reasons why it is useful or beneficial converts it at once from an avocation into an industrylowers it at once to the ignominious category of an 'exercise' undertaken for health, power, or profit. Lifting dumbbells is not a hobby. It is a confession of subservience, not an assertion of liberty.

Doctor, no medicine.—We are machines made to live—organized expressly for that purpose.—Such is our nature.—Do not counteract the living principle.—Leave it at liberty to defend itself, and it will do better than your drugs.

Education is a better safeguard of liberty than a standing army. If we retrench the wages of the schoolmaster, we must raise those of the recruiting sergeant.

Given as a column-end filler in The Farmer's Cabinet, and American Herd Book (15 Mar 1839), Vol. 3, No. 8, 247. This is the earliest occurrence yet found by the editor. If you know the primary source, please contact the Webmaster.

Encryption...is a powerful defensive weapon for free people. It offers a technical guarantee of privacy, regardless of who is running the government... Its hard to think of a more powerful, less dangerous tool for liberty.

For it being the nature of the mind of man (to the extreme prejudice of knowledge) to delight in the spacious liberty of generalities, as in a champion region, and not in the enclosures of particularity; the Mathematics were the goodliest fields to satisfy that appetite.

Give me the liberty to know, to utter, and to argue freely according to conscience, above all liberties.

I believe in only one thing: liberty; but I do not believe in liberty enough to want to force it upon anyone.

I crave the liberty to conceal my name, not to suppress it. I have composed the letters of it written in Latin in this sentence
In Mathesi a sole fundes.
[Anagram from Latinized name, Iohannes Flamsteedius]

In Letter (24 Nov 1669) to Brouncker, collected in Macclesfield, Correspondence of Scientific Men (1841), Vol. 2, 90. [The Latin anagram, In Mathesi a sole fundes was later corrected as I mathesin a sole fundes, which is literally translated as go, you pour out learning from the Sun in Eric Gray Forbes, Lesley Murdin, Frances Wilmoth, The Correspondence of John Flamsteed, The First Astronomer Royal (1995), Vol. 1, 42. Webmaster]

I would trade all the advantages of humanity to be a fly on the wall when Franklin and Jefferson discussed liberty, Lenin and Trotsky revolution, Newton and Halley the shape of the universe, or when Darwin entertained Huxley and Lyell at Down.

It is very desirable to have a word to express the Availability for work of the heat in a given magazine; a term for that possession, the waste of which is called Dissipation. Unfortunately the excellent word Entropy, which Clausius has introduced in this connexion, is applied by him to the negative of the idea we most naturally wish to express. It would only confuse the student if we were to endeavour to invent another term for our purpose. But the necessity for some such term will be obvious from the beautiful examples which follow. And we take the liberty of using the term Entropy in this altered sense ... The entropy of the universe tends continually to zero.

Most females will forgive a liberty, rather than a slight.

People of the same trade seldom meet together, even for merriment and diversion, but the conversation ends in a conspiracy against the public, or in some contrivance to raise prices. It is impossible indeed to prevent such meetings, by any law which either could be executed, or would be consistent with liberty and justice.

Probably among all the pursuits of the University, mathematics pre-eminently demand self-denial, patience, and perseverance from youth, precisely at that period when they have liberty to act for themselves, and when on account of obvious temptations, habits of restraint and application are peculiarly valuable.

Science may be a boon if war can be abolished and democracy and cultural liberty preserved. If this cannot be done, science will precipitate evils greater than any that mankind has ever experienced.

Science must be free. We can permit no restrictions to be placed upon the scientists right to question, to experiment, and to think. Because America has held liberty above all else, distinguished men of science have come here to live, to work, and to seek new knowledge. The world has been the benefactor and science has moved forward. 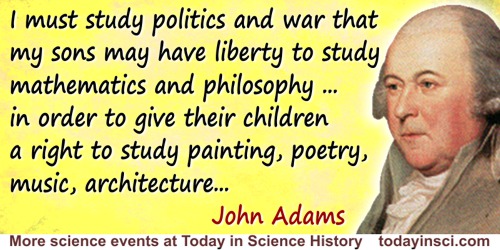 The science of government is my duty.  I must study politics and war that my sons may have liberty to study mathematics and philosophy. My sons ought to study mathematics and philosophy, geography, natural history, naval architecture, navigation, commerce, and agriculture, in order to give their children a right to study painting, poetry, music, architecture, statuary, tapestry, and porcelain.

The wild gas, the fixed air is plainly broke loose: but we ought to suspend our judgments until the first effervescence is a little subsided, till the liquor is cleared, and until we see something deeper than the agitation of the troubled and frothy surface.
[About the spirit of liberty; alluding to Priestleys Observations on Air]

There is more than a germ of truth in the suggestion that, in a society where statisticians thrive, liberty and individuality are likely to be emasculated.

We are at that very point in time when a four-hundred-year-old age is rattling in its deathbed and another is struggling to be born. A shifting of culture, science, society and institutions enormously greater and swifter than the world has ever experienced. Ahead, lies the possibility of regeneration of individuality, liberty, community and ethics such as the world has never known, and a harmony with nature, with one another and with the divine intelligence such as the world has always dreamed.

We shall never achieve harmony with land, any more than we shall achieve justice or liberty for people. In these higher aspirations the important thing is not to achieve, but to strive.

What I want to stress is that the pre-condition of scientific discovery is a society which does not demand usefulness from the scientist, but grants him the liberty which he needs for concentration and for the conscientious detailed work without which creation is impossible.

When Franklin drew the lightning from the clouds, he little dreamed that in the evolution of science his discovery would illuminate the torch of Liberty for France and America. The rays from this beacon, lighting this gateway to the continent, will welcome the poor and the persecuted with the hope and promise of homes and citizenship.