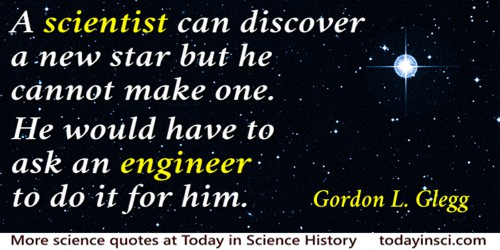 A scientist can discover a new star but he cannot make one. He would have to ask an engineer to do it for him.

At their best, at their most creative, science and engineering are attributes of libertynoble expressions of mans God-given right to investigate and explore the universe without fear of social or political or religious reprisals.

From 'Sarnoff Honored by I.R.E.', in Department of Information of the Radio Corporation of America, Radio Age: Research, Manufacturing, Communications, Broadcasting (Apr 1953), 12, No. 2, 32.

Engineering is quite different from science. Scientists try to understand nature. Engineers try to make things that do not exist in nature. Engineers stress invention. To embody an invention the engineer must put his idea in concrete terms, and design something that people can use. That something can be a device, a gadget, a material, a method, a computing program, an innovative experiment, a new solution to a problem, or an improvement on what is existing. Since a design has to be concrete, it must have its geometry, dimensions, and characteristic numbers. Almost all engineers working on new designs find that they do not have all the needed information. Most often, they are limited by insufficient scientific knowledge. Thus they study mathematics, physics, chemistry, biology and mechanics. Often they have to add to the sciences relevant to their profession. Thus engineering sciences are born.

The Tower and the Bridge: The New Art of Structural Engineering (1983), 9.

Science and engineering students presumably are left to learn about their literature in the same way they learn about sex. 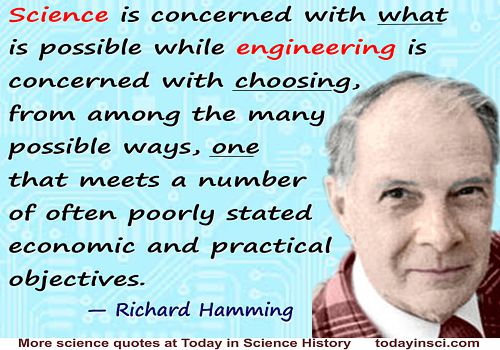 In Lee Dye, 'On Science: Who Leads the Parade of Invention, Scientist or Engineer?', Los Angeles Times (3 Sep 1990) it is stated (without any quotation marks) that: A number of years ago, when Caltech planetary scientist Bruce Murray was the director of the Jet Propulsion Laboratory, he is said to have told his colleague, engineer John Casani, that scientists do the work of God; engineers do the work of man.

The engineer is concerned to travel from the abstract to the concrete. He begins with an idea and ends with an object. He journeys from theory to practice. The scientists job is the precise opposite. He explores nature with his telescopes or microscopes, or much more sophisticated techniques, and feeds into a computer what he finds or sees in an attempt to define mathematically its significance and relationships. He travels from the real to the symbolic, from the concrete to the abstract. The scientist and the engineer are the mirror image of each other.

The inspirational value of the space program is probably of far greater importance to education than any input of dollars... A whole generation is growing up which has been attracted to the hard disciplines of science and engineering by the romance of space.

The scientist describes what is; the engineer creates what never was.

Biographical Memoirs of Fellows of the Royal Society (1980), 26, 110. As cited in Alan L. Mackay, A Dictionary of Scientific Quotations (1994), 138. (Also seen as Scientists study/discover the world as it is, engineers create the world that never has been.) 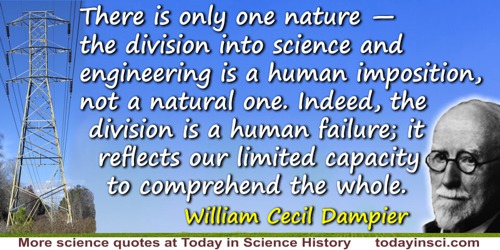 There is only one nature—the division into science and engineering is a human imposition, not a natural one. Indeed, the division is a human failure; it reflects our limited capacity to comprehend the whole.

[An engineer's] invention causes things to come into existence from ideas, makes world conform to thought; whereas science, by deriving ideas from observation, makes thought conform to existence. 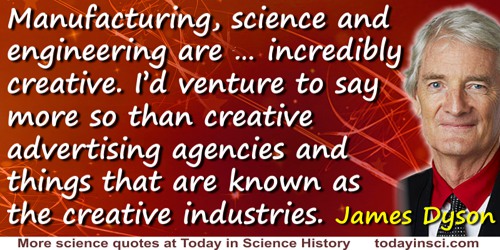 [M]anufacturing, science and engineering are  incredibly creative. Id venture to say more so than creative advertising agencies and things that are known as the creative industries.