Richard Hamming - “Engineering is concerned with choosing, from among the many possible ways” 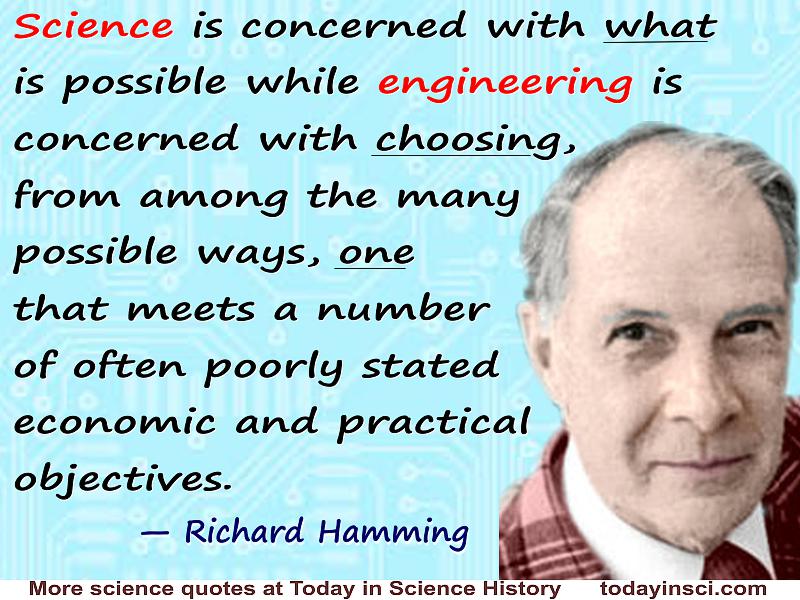 “Science is concerned with what is possible while engineering is concerned with choosing, from among the many possible ways, one that meets a number of often poorly stated economic and practical objectives.”
— Richard Hamming
Turing Award Lecture (1968)

Context of Richard Hamming's quote, “Engineering is concerned with choosing...”

In 1968, Richard Hamming was invited to give the Turing Lecture to the Association for Computing Machinery, which he titled, “One Man's View of Computer Science.” At the time, he worked at Bell Telephone Laboratories, and was not an academic. Thus, he would more naturally see the role of computer science in terms of its useful applications, and his concern was that students coming into the field have a preparation for practicality. Accordingly, his lecture addressed his ideas for improved planning of any computer science curriculum.

Hamming introduced the quote shown above, saying it would serve as an example of making distinctions, and it was offered casually, as an arbitrary example. He then applied it to the subject of his lecture:

In a number of observations and comments, he advocated that more engineering flavour be given to computer science. He made the point that instead of looking at difficulties in this field in terms of theoretical questions of whether certain things could be done, rather the practical questions should be answered as to how they can be accomplished well and simply. He suggested including a laboratory course in programming and adding a requirement for a strong minor in something other than mathematics. Overall, he gave his opinion that there should be more practical coding and less abstract theory, more seriousness and less game playing. Furthermore, the three topics of ethics, professional behaviour and social responsibility should be taught “constantly, all the time, by everyone,” communicated by professors who integrated conveying these values throughout their instruction, and by their own behaviour.

Hamming concluded with this remark:

We are not engaged in turning out technicians, idiot savants, and computniks; we know that in this modern, complex world we must turn out people who can play responsible major roles in our changing society, or else we must acknowledge that we have failed in our duty as teachers and leaders in this exciting, important field—computer science.