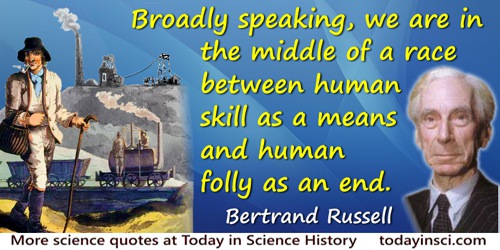 Science for the Citizen is ... also written for the large and growing number of adolescents, who realize that they will be the first victims of the new destructive powers of science misapplied.

Science for the Citizen: A Self-Educator based on the Social Background of Scientific Discovery (1938), Author's Confessions, 9.

Broadly speaking, we are in the middle of a race between human skill as a means and human folly as an end.

Humanity, in the course of time, had to endure from the hands of science two great outrages against its naive self-love. The first was when humanity discovered that our earth was not the center of the universeâ€¦. The second occurred when biological research robbed man of his apparent superiority under special creation, and rebuked him with his descent from the animal kingdom, and his ineradicable animal nature.

From a series of 28 lectures for laymen, Part Three, 'General Theory of the Neurons', Lecture 18, 'Traumatic Fixationâ€”the Unconscious' collected in Sigmund Freud and G. Stanley Hall (trans.), A General Introduction to Psychoanalysis (1920), 246-247.

I believe it to be of particular importance that the scientist have an articulate and adequate social philosophy, even more important than the average man should have a philosophy. For there are certain aspects of the relation between science and society that the scientist can appreciate better than anyone else, and if he does not insist on this significance no one else will, with the result that the relation of science to society will become warped, to the detriment of everybody.

In the modern world, science and society often interact in a perverse way. We live in a technological society, and technology causes political problems. The politicians and the public expect science to provide answers to the problems. Scientific experts are paid and encouraged to provide answers. The public does not have much use for a scientist who says, â€śSorry, but we donâ€™t know.â€ť The public prefers to listen to scientists who give confident answers to questions and make confident predictions of what will happen as a result of human activities. So it happens that the experts who talk publicly about politically contentious questions tend to speak more clearly than they think. They make confident predictions about the future, and end up believing their own predictions. Their predictions become dogmas which they do not question. The public is led to believe that the fashionable scientific dogmas are true, and it may sometimes happen that they are wrong. That is why heretics who question the dogmas are needed.

Frederick S. Pardee Distinguished Lecture (Oct 2005), Boston University. Collected in 'Heretical Thoughts About Science and Society', A Many-Colored Glass: Reflections on the Place of Life in the Universe (2007), 43-44.

It is a matter of primary importance in the cultivation of those sciences in which truth is discoverable by the human intellect that the investigator should be free, independent, unshackled in his movement; that he should be allowed and enabled to fix his mind intently, nay, exclusively, on his special object, without the risk of being distracted every other minute in the process and progress of his inquiry by charges of temerariousness, or by warnings against extravagance or scandal.

It is characteristic of our age to endeavour to replace virtues by technology. That is to say, wherever possible we strive to use methods of physical or social engineering to achieve goals which our ancestors thought attainable only by the training of character. Thus, we try so far as possible to make contraception take the place of chastity, and anaesthetics to take the place of fortitude; we replace resignation by insurance policies and munificence by the Welfare State. It would be idle romanticism to deny that such techniques and institutions are often less painful and more efficient methods of achieving the goods and preventing the evils which unaided virtue once sought to achieve and avoid. But it would be an equal and opposite folly to hope that the take-over of virtue by technology may one day be complete, so that the necessity for the laborious acquisition of the capacity for rational choice by individuals can be replaced by the painless application of the fruits of scientific discovery over the whole field of human intercourse and enterprise.

'Mental Health in Plato's Republic', in The Anatomy of the Soul: Historical Essays in the Philosophy of Mind (1973), 26.

Nothing in science has any value to society if it is not communicated, and scientists are beginning to learn their social obligations.

Science is in low regard.

Science may be a boon if war can be abolished and democracy and cultural liberty preserved. If this cannot be done, science will precipitate evils greater than any that mankind has ever experienced. 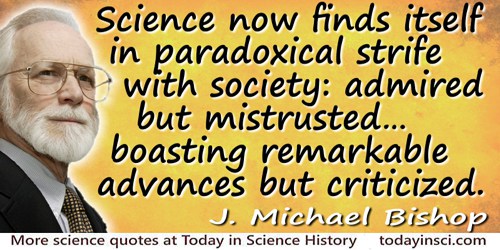 Some day science may have the existence of man in its power, and the human race may commit suicide by blowing up the world.

The main object of all science is the freedom and happiness of man.

The popularisation of scientific doctrines is producing as great an alteration in the mental state of society as the material applications of science are effecting in its outward life. Such indeed is the respect paid to science, that the most absurd opinions may become current, provided they are expressed in language, the sound of which recals [sic] some well-known scientific phrase.

The results of science, in the form of mechanism, poison gas, and the yellow press, bid fair to lead to the total downfall of our civilization.

We are fast approaching a situation in which nobody will believe anything we [physicists] say in any matter that touches upon our self-interest. Nothing we do is likely to arrest our decline in numbers, support or social value.

What the scientists have in their briefcases is terrifying.

When scientific programs are judged by popular acclaim we inevitably have overemphasis on the spectacular. â€¦ The deeply important scientific advances moving today are not easy to understand. If they were they would have been accomplished long ago.

Where speculation endsâ€”in real lifeâ€”there real, positive science begins: the representation of the practical activity, of the practical process of development of men. Empty talk about consciousness ceases, and real knowledge has to take its place.

â€™Tis a pity learned virgins ever wed
With persons of no sort of education,
Or gentlemen, who, though well born and bred,
Grow tired of scientific conversation.