About the year 1821, I undertook to superintend, for the Government, the construction of an engine for calculating and printing mathematical and astronomical tables. Early in the year 1833, a small portion of the machine was put together, and was found to perform its work with all the precision which had been anticipated. At that period circumstances, which I could not control, caused what I then considered a temporary suspension of its progress; and the Government, on whose decision the continuance or discontinuance of the work depended, have not yet communicated to me their wishes on the question. 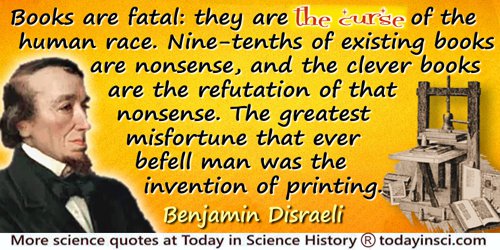 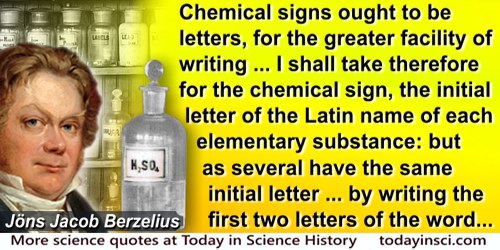 Chemical signs ought to be letters, for the greater facility of writing, and not to disfigure a printed book ... I shall take therefore for the chemical sign, the initial letter of the Latin name of each elementary substance: but as several have the same initial letter, I shall distinguish them in the following manner: 1. In the class which I shall call metalloids, I shall employ the initial letter only, even when this letter is common to the metalloid and to some metal. 2. In the class of metals, I shall distinguish those that have the same initials with another metal, or a metalloid, by writing the first two letters of the word. 3. If the first two letters be common to two metals, I shall, in that case, add to the initial letter the first consonant which they have not in common: for example, S = sulphur, Si = silicium, St = stibium (antimony), Sn = stannum (tin), C = carbonicum, Co = colbaltum (colbalt), Cu = cuprum (copper), O = oxygen, Os = osmium, &c.

Cherish you visions and your dreams as they are the children of your soul; the blue prints of your ultimate achievements.

Five centuries ago the printing press sparked a radical reshaping of the nature of education. By bringing a masters words to those who could not hear a masters voice, the technology of printing dissolved the notion that education must be reserved for those with the means to hire personal tutors. Today we are approaching a new technological revolution, one whose impact on education may be as far-reaching as that of the printing press: the emergence of powerful computers that are sufficiently inexpensive to be used by students for learning, play and exploration. It is our hope that these powerful but simple tools for creating and exploring richly interactive environments will dissolve the barriers to the production of knowledge as the printing press dissolved the barriers to its transmission.

As co-author with A.A. diSessa, from 'Preface', Turtle Geometry: The Computer as a Medium for Exploring Mathematics (1986), xiii.

I am trying to get the hang of this new fangled writing machine, but I am not making a shining success of it. However, this is the first attempt I have ever made & yet I perceive I shall soon & easily acquire a fine facility in its use.  The machine has several virtues. I believe it will print faster than I can write. One may lean back in his chair & work it. It piles an awful stack of words on one page. It don't muss things or scatter ink blots around. Of course it saves paper.

I could fill an entire second life with working on my prints.

I learned, and later had to unlearn in order to become a scientist myself, that science is simply measurement and the answers are in print.

I try in my prints to testify that we live in a beautiful and orderly world, and not in a formless chaos, as it sometimes appears.

In the printed page the only real things are the paper and the ink; the white spaces play the same part in aiding the eye to take in the meaning of the print as do the black letters.

Kin Hubbard is dead. To us folks that attempt to write a little humor his death is just like Edison's would be to the world of invention. No man in our generation was within a mile of him, and I am so glad that I didn't wait for him to go to send flowers. I have said it from the stage and in print for twenty years.  Just think  only two lines a day, yet he expressed more original philosophy in em than all the rest of the paper combined. What a kick Twain and all that gang will get out of Kin.

The advantage which science gained by Gauss long-lingering method of publication is this: What he put into print is as true and important today as when first published; his publications are statutes, superior to other human statutes in this, that nowhere and never has a single error been detected in them. This justifies and makes intelligible the pride with which Gauss said in the evening of his life of the first larger work of his youth: The Disquisitiones arithmeticae belong to history.

In Allgemeine Deutsche Biographie (1878, 8, 435. As cited and translated in Robert Édouard Moritz, Memorabilia Mathematica; Or, The Philomaths Quotation-book (1914), 158.

The brown and charred rags that hung from the sides of it, I presently recognized as the decaying vestiges of books. They had long since dropped to pieces, and every semblance of print had left them.  Had I been a literary man I might, perhaps, have moralized upon the futility of all ambition.

Time will soon destroy the works of famous painters and sculptors, but the Indian arrowhead will balk his efforts and Eternity will have to come to his aid. They are not fossil bones, but, as it were, fossil thoughts, forever reminding me of the mind that shaped them . Myriads of arrow-points lie sleeping in the skin of the revolving earth, while meteors revolve in space. The footprint, the mind-print of the oldest men.

We are the children of a technological age. We have found streamlined ways of doing much of our routine work. Printing is no longer the only way of reproducing books. Reading them, however, has not changed...

We have to walk in a way that we only print peace and serenity on the Earth. Walk as if you are kissing the Earth with your feet.

When the uncultured man sees a stone in the road it tells him no story other than the fact that he sees a stone  The scientist looking at the same stone perhaps will stop, and with a hammer break it open, when the newly exposed faces of the rock will have written upon them a history that is as real to him as the printed page.

You have read my writings, and from them you have certainly understood which was the true and real motive that caused, under the lying mask of religion, this war against me that continually restrains and undercuts me in all directions, so that neither can help come to me from outside nor can I go forth to defend myself, there having been issued an express order to all Inquisitors that they should not allow any of my works to be reprinted which had been printed many years ago or grant permission to any new work that I would print.  a most rigorous and general order, I say, against all my works, omnia et edenda; so that it is left to me only to succumb in silence under the flood of attacks, exposures, derision, and insult coming from all sides.