An inventor is an opportunist, one who takes occasion by the hand; who, having seen where some want exists, successfully applies the right means to attain the desired end. The means may be largely, or even wholly, something already known, or there may be a certain originality or discovery in the means employed. But in every case the inventor uses the work of others. If I may use a metaphor, I should liken him to the man who essays the conquest of some virgin alp. At the outset he uses the beaten track, and, as he progresses in the ascent, he uses the steps made by those who have preceded him, whenever they lead in the right direction; and it is only after the last footprints have died out that he takes ice-axe in hand and cuts the remaining steps, few or many, that lift him to the crowning height which is his goal.

Cuvier  brings the void to life again, without uttering abracadabras, he excavates a fragment of gypsum, spies a footprint and shouts: Look! And suddenly the marbles are teeming with creatures, the dead come to life again, the world turns!

I see it fall.
So beautiful and light.
So very tranquil.
Untouchable in the night.
Pretty in white.
Like the stars at night.
The twinkle from the shine.
The cold from the sky.
With every footprint left.
Every snowman made.
With every snowflake fallen.
Unique in every way.

In a manner which matches the fortuity, if not the consequence, of Archimedes bath and Newtons apple, the [3.6 million year old] fossil footprints were eventually noticed one evening in September 1976 by the paleontologist Andrew Hill, who fell while avoiding a ball of elephant dung hurled at him by the ecologist David Western.

In the early seventies my mother [Mary Leakey] returned to Laetoli, a site in Tanzania that my parents had discovered in the thirties. In 1976, she discovered footprints of ancient hominids. These three-and-a-half-million- year-old footprints provide evidence of bipedality.

Is not Cuvier the great poet of our era? Byron has given admirable expression to certain moral conflicts, but our immortal naturalist has reconstructed past worlds from a few bleached bones; has rebuilt cities, like Cadmus, with monsters teeth; has animated forests with all the secrets of zoology gleaned from a piece of coal; has discovered a giant population from the footprints of a mammoth.

Im sick of people thinking that efficiency is going to be sufficient. Im sick of seeing people say, Im going to reduce my carbon footprint, and think that being less bad is being good.  I want healthy, safe things in closed cycles, not just being less bad.

Lives of great men remind us
We can make our lives sublime,
And departing leave behind us
Footprints on the sands of time.

From poem, 'A Psalm of Life', collected in Poetical Works of Henry Wadsworth Longfellow (1856), 73.

Science has blown to atoms, as she can rend and rive in the rocks themselves; but in those rocks she has found, and read aloud, the great stone book which is the history of the earth, even when darkness sat upon the face of the deep. Along their craggy sides she has traced the footprints of birds and beasts, whose shapes were never seen by man. From within them she has brought the bones, and pieced together the skeletons, of monsters that would have crushed the noted dragons of the fables at a blow.

Book review of Robert Hunt, Poetry of Science (1848), in the London Examiner (1848). Although uncredited in print, biographers identified his authorship from his original handwritten work. Collected in Charles Dickens and Frederic George Kitton (ed.) Old Lamps for New Ones: And Other Sketches and Essays (1897), 87.

The existing premises, wholly altered by geologic science, are no longer those of Hume. The foot-print in the sandto refer to his happy illustrationdoes now stand alone. Instead of one, we see many footprints, each in turn in advance of the print behind it, and on a higher level. 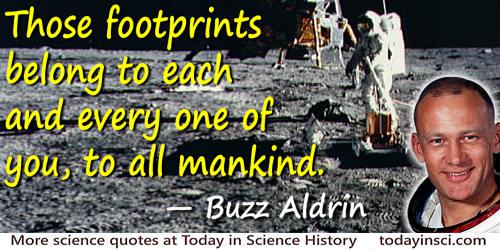 The [Moon] surface is fine and powdery. I can kick it up loosely with my toe. It does adhere in fine layers like powdered charcoal to the sole and sides of my boots. I only go in a small fraction of an inch, maybe an eighth of an inch, but I can see the footprints of my boots and the treads in the fine sandy particles.
[First report, immediately after stepping on to the Moon and saying “That's one small step for (a) man; one giant leap for mankind.”]

Time will soon destroy the works of famous painters and sculptors, but the Indian arrowhead will balk his efforts and Eternity will have to come to his aid. They are not fossil bones, but, as it were, fossil thoughts, forever reminding me of the mind that shaped them . Myriads of arrow-points lie sleeping in the skin of the revolving earth, while meteors revolve in space. The footprint, the mind-print of the oldest men.

We have found that where science has progressed the farthest, the mind has but regained from nature that which the mind has put into nature.
We have found a strange foot-print on the shores of the unknown. We have devised profound theories, one after another, to account for its origin. At last, we have succeeded in reconstructing the creature that made the foot-print. And Lo! it is our own.

Concluding sentences in Space, Time and Gravitation: An Outline of the General Relativity Theory (1921), 200-201